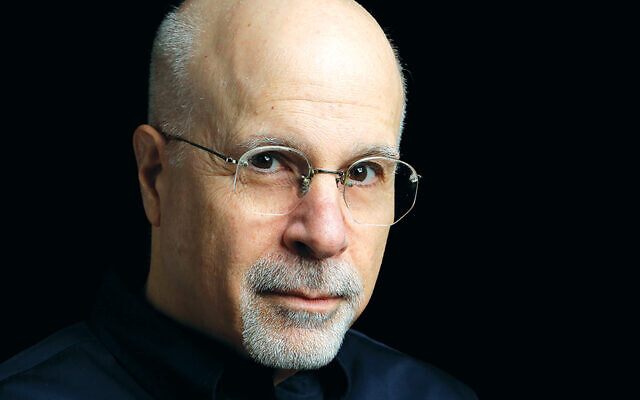 Okay, no, God is not really a man. God is above and beyond and separate from gender. Not a person at all. Not a man.

Because it is hard for most people to imagine God without modeling the image on a person; because as much as many people try to avoid doing that, it’s hard never to do it; and because the language and imagery most of use for God most of the time is masculine — avinu malkenu, our father our king; God the warrior (the Song of the Sea tells us that God is a man of war); God the avenger; God the patriarch — by default most people’s idea of God is male.

That’s not always been true, Rabbi Mark Sameth says. Pronouns and images hiding in plain sight in the Torah hint at an image of God as not only, not always male. His book, “The Name: A History of the Dual-Gendered Hebrew Name for God,” talks about his discovery of this truth, along with the history of how it’s been uncovered and recovered in the course of history.

Rabbi Sameth made this discovery over years of discomfort, study, and pattern-hunting. (He’ll talk about it for Congregation Agudath Israel in West Caldwell; see box.)

He began thinking about it as he found his place in Congregation B’nai Jeshurun, a large Conservative shul on the Upper West Side. When he first joined BJ, in the early 1990s, it apparently was dying, but it revitalized with a vibrant social action program, brilliant sermons by the charismatic Rabbi Marshall Meyer, and even more with music that was profoundly soul-stirring. Mark — not yet Rabbi — Sameth loved almost everything about BJ; he spent two years there as its rabbinic intern when he was a rabbinical student. “It was my beloved community, and I was its chazzan sheni,” its second cantor, when its community grew so large that not everyone could be accommodated at one religious service on Shabbat, he said. (Rabbi Sameth also has a background as a musician; he’s a second career rabbi who left Nashville for the seminary.)

“I loved the music, I loved being in that space, I loved the study, I loved going to shul and not talking about what you did for a living,” Rabbi Sameth said. “I loved everything about it, except the one thing that didn’t work for me was the Torah. It confused me. I couldn’t understand why there seemed to be so many mistakes.” There are many inconsistencies in the text — how many of a kind were on Noah’s ark? Two? Seven? Were they all mistakes?

“Who can be aware of errors? Clear me of unperceived guilt,” a conventional translation of Psalm 13, verse 13, tells us, but that’s not a literal translation, Rabbi Sameth said. Literally, tellingly, it means “Those who will understand my mistakes will uncover me.” (Sounds like Freud, doesn’t it? “Yes,” Rabbi Sameth said, “and that’s not coincidental.”)

He thought he saw errors in the text — but were they? Or were they the true intent of their author?

He talked about his problem with Torah text with one of his teachers at his rabbinical school, Hebrew Union College — Jewish Institute of Religion, and that teacher, Rabbi Lawrence Kushner, told him “Look, you can always reject the text. That’s easy. Why don’t you try staying with it? Struggle with it. Stay with the text. Stay inside the text.”

“That made a huge impression of me,” Rabbi Sameth said. “That’s what I did. And then I started noticing things, and with each little thing I noticed, I was encouraged further.”

Putting Rabbi Kushner’s advice together with the wisdom of the psalmist, he started studying the text, sometimes letter by letter, at an absolutely granular level, and sometimes “pulling all the way back, and looking at literary theory, at Robert Alter, at Derrida, and Susan Handelman.” (Dr. Handelman’s groundbreaking 1983 book, “Slayers of Moses: The Emergence of Rabbinic Interpretation in Modern Literary Theory,” examines the importance of Jewish religious thought in the unfolding of literary theory.)

“The thesis of my book is that the four Hebrew letters that make up the name of God” — the Tetragrammaton, YHWH — “signifies the dual-gendered deity,” Rabbi Sameth said; when it’s read backward, it’s “Who-Hi” — in Hebrew, that’s “he/she.”

He also saw that Eve once was referred to with a male pronoun, and in the Book of Esther, Mordecai is called Esther’s “nursing father.” Similarly, Isaiah says that Israel’s kings will be “nursing kings.”

It is not as if all of these signs — or perhaps they are the mistakes that uncover the writer’s true intention — have gone entirely unremarked.

“They have been noticed and written about in the past,” Rabbi Sameth said. “In the 16th century, and again the 19th.” And then now, in the 21st.

In response to history as it unfolded, Rabbi Sameth said; it’s a question he’s been thinking about since he published his book. “In 1540, it became permissible, according to kabbalistic tradition, to reveal all the secrets of Kabbalah” — something that had been entirely forbidden until then. Why? “Because Christian cabalists, centered in Florence, Italy, had been arguing for a Christological interpretation of Kabballah” — he follows the convention of spelling cabalists with a C when he’s writing about the Christians, and with a K when he’s writing about Jews — “and to do that, they got very creative with the Kabballah. So Jews had a choice to make — either they keep silent, or they argue that the Christian cabalists had it wrong.” But they couldn’t make that argument without any evidence, and they couldn’t have any evidence if they were unable to make any public statements about Kabballah.

So a cabalist named Guillaume Postel began to translate the Zohar (the 13th century mystical text at the heart of Kabbalah) — and he also made the claim that YHWH was He/She reversed. The Vatican had him arrested for heresy and suppressed the manuscript; the Holy See did that so effectively that it did not resurface until 1969.

In the 19th century, Michelangelo Lanci published a book about God’s pronouns. The Vatican didn’t like that one either. “That book did get published,” Rabbi Sameth said. “The Vatican picked up all the copies that they could find, and they banned the book.” You can still find it on a list of banned work the Vatican maintains, he added.

Rabbi Sameth started doing this research slowly, but it’s a cumulative process; as time went by it added up. “My practice, since I got smicha, always has been to study one commentator a year,” he said. “I will do Rashi one year, the Rambam another. So I spent every Shabbat one year studying Bahya ben Asher’s commentary on the Torah portion.” (Bahya ben Asher was a 13th- to-14th century Spanish Torah exegete.) “It was lovely.

“When he came across a four-word cluster — a verse with four words together — he would take the rashei tavot, the capital letters, and flip them, and it gives you the Tetragrammaton.

“What was Bayha ben Asher doing? Why was he pointing out the four letters of the name of God in reverse? We can assume that he is signaling to the other mayvin” — other experts — “that he is aware of the tradition. That is part of the tradition.”

If there were reasons why 16th and 19th century scholars became aware of this pattern, why is he noticing it now? What lessons does it have for us today?

“I use the term ‘usable past’ in my book,” Rabbi Sameth said. “We have no idea what this pattern meant to the earliest Israelite priests. But I do suggest ways in which this could be meaningful and useful to us today. And I talk about the empowerment of women.

“Mary Daly wasn’t Jewish” — she was a 20th century American Catholic theologian — “but she had a great line.

But the Jewish tradition never has had an only male God. “On Friday nights, we welcome the Shechinah,” the feminine aspect of God, Rabbi Sameth said. “This is not a hiddush. We are not just now discovering this. This is our tradition. Elevating women and the quote feminine unquote aspect of God can be a good thing.

“And then in the LGBTQ community, which includes the allies and nonbinary people, and people who are genderfluid, there is a whole world where I think this metaphor can be helpful and profoundly comforting. And then there is a philosophical interpretation that I think also is applicable.

“Maimonides knew this tradition” — that God is dual-gendered — “and he tells us that in the ‘Guide of the Perplexed.’ He talks about God as analogous to Adam and Eve, and he says of Adam and Eve — analogous to God — that they were two in one respect. And at the same time we say Hashem echad” — God is One.

“And one of God’s names is Elohim.” That’s a plural noun. Yet God is One. And Adam and Eve are two, but they are one.

“It’s a way of looking at the world, where there is so much contention and difference, and understanding that it is all part of the One,” Rabbi Sameth said.

What: Will talk about his book “The Name: A History of the Dual-Gendered Hebrew Name for God”

For whom: Congregation Agudath Israel in Caldwell