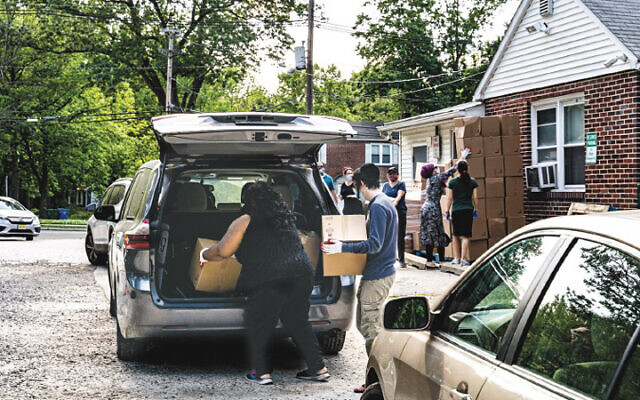 Volunteers, carefully dressed in masks and gloves, give boxes of kosher food to families with children. (TEACHNJ)

The novel coronavirus has killed more than 112,000 people in the United States so far; it’s ravaged other parts of the world as well, and although the rates of new infections and death are slowing, the threat of its resurgence remains.

Many corollary harms have grown out of those grim numbers. The economy’s been shuttered; almost 40 million people have lost their jobs, at least temporarily; the rates of mental illness and domestic abuse have risen; people are dying of often treatable conditions because they’re afraid to risk going to the doctor, much less the emergency room.

And then there are other dangers. One of those terrible side effects is food insecurity or just plain hunger. People have less money, and the supply chains that bring food to people have snapped.

And then of course there is the social unrest, brought to the surface by overt racism, that always is part of the American story.

But even as society struggles to figure out how to cope, parts of the government and local and national nonprofits are coming up with ways to provide people with food, and to allow them to get that food and still retain their dignity.

Those people include Jews.

Soon after the covid-19 pandemic began, the United States Department of Agriculture, which has given food to people facing hunger if they meet some fairly stringent conditions, relaxed regulations and made it easier for people who needed food to get it. 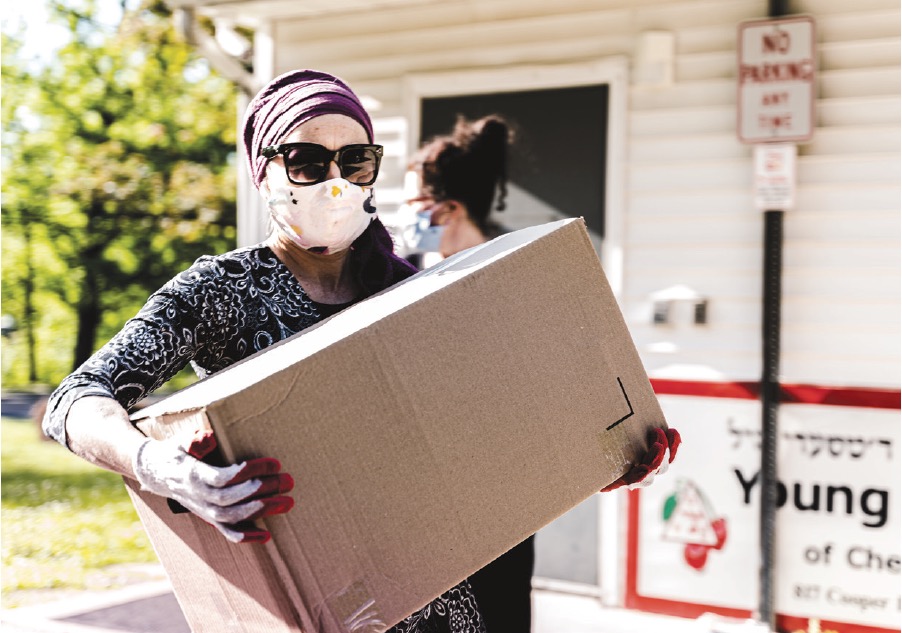 A volunteer, carefully dressed in masks and gloves, give boxes of kosher food to families with children. (TEACHNJ)

“Food insecurity is a major concern.” Daniel Mitzner, the director of political affairs for the Teach Coalition, an Orthodox Union-affiliate agency that advocates for non-public schools, said. “The USDA has responded by taking existing programs, which feed those most at need, and have adjusted them by creating waivers around the country that basically allows sites around the country to feed a much broader swath of the population, and to do it outside of the normal ways of doing things. And rightfully so.” That’s because the numbers of people most in need have expanded dramatically and quickly, and the farmers and delivery people and restaurateurs and caterers who feed them have had their business affected so deeply. There has been no time for bureaucratic hair-splitting when there are so many people to be fed, and so much food to distribute in new ways.

Then the Teach Coalition  started to think about how to help people who need kosher food. And that led to the free Kosher Grab and Go meals.

The program gives free kosher meals to families with children between 1 and 18 years old. It demands no paperwork and has no other eligibility requirements; it even takes the number of children in a family on faith, asking for no proof. It’s envisioned for now as a summer program and set to end in August, but that might change. It will depend on the economy and the need as autumn approaches.

Kosher Grab and Go is a reimbursement program; vendors are paid according to the number of meals given away, not the number they’ve prepared. For that reason, participants are asked to register before they come to pick up their meals; it’s best for everyone that the suppliers neither run out of food nor have very much left over.

TeachNJ, the Teach Coalition’s local agency, has opened four sites so far; they’re in Bergenfield and Teaneck in the state’s northern end, as well as in Cherry Hill and Elizabeth. It plans to open in Jersey City and Union City soon as well.

The program gives students six to seven days of meals. Their parents can pick up those large packages once a week in Teaneck and twice a week in Bergenfield. (They can go to only one place, though. No double-dipping.) The packages are assembled according to the federal guidelines about nutritious  meals for children; because they’re in fairly large containers, less Styrofoam and plastic and paper are wasted.

The pick-up sites in Bergen County — which already had been vetted because they’ve been the sites for other USDA programs — are Bergenfield High School and Yeshivat HeAtid in Teaneck. That’s one public school and one day school.

TeachNJ prepared for the program by “sending out a survey,” Renee Klyman, the group’s grassroots coordinator, said. “It went out through our schools and synagogues.” Although TeachNJ is an Orthodox Union affiliate, and its network is Orthodox, the program is open to everyone who keeps kosher; in fact, it is open to everyone, period.

“Pick-up is as contactless as possible,” Ms. Klyman said. “A car drives up, the driver says how many children in the family, the meals are put in the trunk, and the car drives away.”

Because there are no eligibility requirements, there should be no stigma, Ms. Klyman and Mr. Mitzner stressed. This is a hard time. There are no judgments. No assumptions. And people seem to know that. “In Bergenfield, our first sign-up sheet had 800 people. That has jumped to 1,200. In Teaneck, we have 3,200.”

If you’re worrying about how to feed your family, how to ensure that they’re not hungry and that the food they get is both nutritious and kosher, TeachNJ’s got your back. Learn more and register at Teachcoalition.org/nj/koshermeals/.