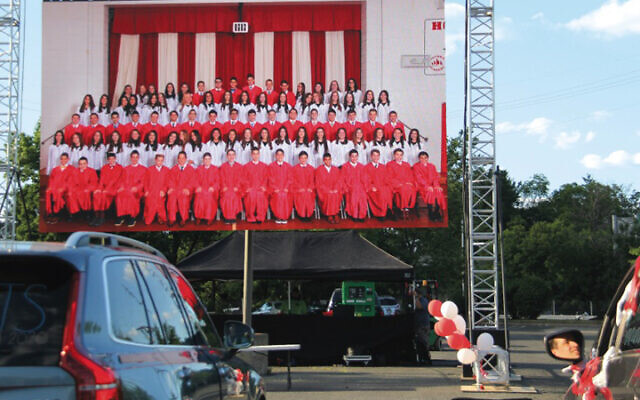 Once upon a time, there was drive in theater in Paramus. Erected in the early 1930s, torn down in the late 1980s, its space was claimed by a parking lot at the Garden State Plaza mall.

On Sunday, however, the past blazed back to life. There in the parking lot was a large digital screen, and facing it there were something like a hundred cars. (They were mostly minivans, though, rather than the family station wagons of old.)

The stars of the screen — and the stage set up before it — were not the Hollywood heroes of yore, but rather New Jersey’s freshest crop of eighth-grade graduates.

Susan Nadritch of Teaneck is a graduate of the Yavneh Academy, and as of Sunday, she’s also the mother of three other graduates from the Paramus school. She recalls her graduation taking place in the pre-kindergarten-through-eight-grade school’s cafeteria. Her older sons’ graduation took place in the more spacious auditorium at Paramus High School. 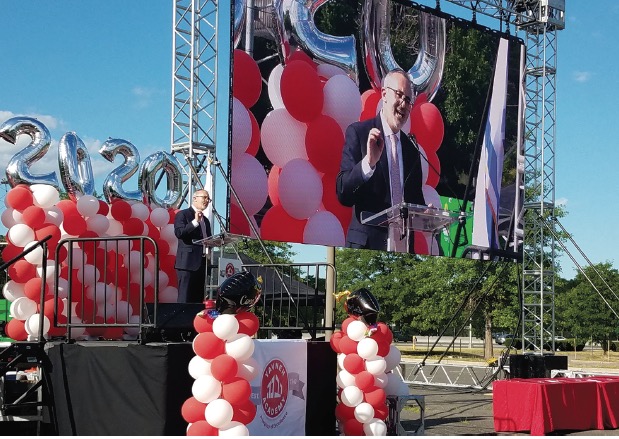 But Paramus High School wasn’t an option this year, because some of the qualities that make it a prime graduation venue — a ceiling and walls — are strictly no-go in an era of social distancing.

So the question was what to do instead? How could the Yavneh students celebrate their milestone?

In settling on an outdoor drive-in graduation, Yavneh offered the perfect capstone to a school year that began — as it turned out, ironically — with a communal call to limit student screen time but was marked by disruption, technology, and ingenuity.

“It was amazing,” Ms. Nadritch said of the ceremony.

Planning it was an adventure for Yavneh leadership.

“When we first started planning, we didn’t know if we could do the event at all,” Rabbi Aaron Ross, the assistant principal of Yavneh’s middle school, said.

In the end, after consultation with the Paramus health department and the state’s latest guidelines, each of the 87 graduates were permitted to leave his or her car, wearing a custom Yavneh facemask, and go up to receive a diploma.

“Everything has been fluid,” Rabbi Ross said. 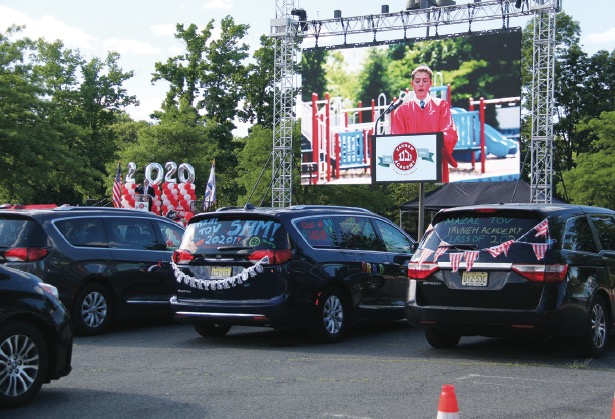 In lieu of a processional — it’s hard to walk in line six feet apart — students sent in videos of themselves walking down their front walkways in their graduation gowns. The valedictorian, Avi Friedman of Teaneck, filmed his speech beforehand.

“Everyone was so happy and enthusiastic to be there,” Ms. Nadritch said.

There was only space for one car for each graduate, so the ceremony was livestreamed. That was a boon for everyone who couldn’t make it to the family car, including out-of-town relatives.

“It surpassed our wildest expectations of what a graduation could be,” Leyna Goro of Teaneck said. Her oldest son, Alex, was one of the graduates.

“It was so meaningful that we could all be together even though we were apart,” Ms. Goro said. “The fact the school put so much time and effort and care into making this graduation a celebration was a demonstration of how to pivot, how to learn, how to grow. You can thrive and put on a graduation that was more meaningful than any I’ve seen before.”

She said the drive-in experience “was so unique and fun.” That included the experience of tuning the radio dial to the frequency where the proceedings were being broadcast. “It was retro.”

The screen belonged to PJ Windle, of Jackson Township in Ocean County. Mr. Windle, who owns a wedding entertainment business, set up “Back to the Movies” as a traveling drive-in theater back in April. 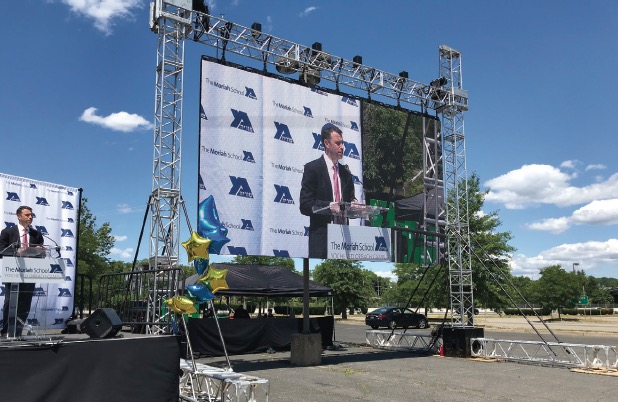 The Moriah School in Englewood also had its graduation in the mall parking lot using Mr. Windle’s screen on Sunday. Once Yavneh finalized its plans, it reached out to Moriah, which then scheduled its graduation at the same place earlier in the afternoon.

For Ms. Nadritch, the graduation capped a school year that afforded her remarkable access to her son’s education.

She worked from home in her kitchen; two of her sons, who share a bedroom, took turns at virtual school in the dining room.

“I heard classes all day long,” she said. “They’re amazing. They’re engaging. The students had this comfort level with their rabbis and teachers that’s such a blessing. The administrators are their friends. They feel comfortable saying whatever they want. I always knew we had great teachers, but I heard the teachers and I give them a tremendous amount of credit. It was a very difficult situation for the teachers, not being able to look students in the eye.”

And that loss of human touch was palpable at the graduation.

“I think it was hard for the principals and administrators not to be able to hug the kids and say goodbye,” Ms. Nadritch said.