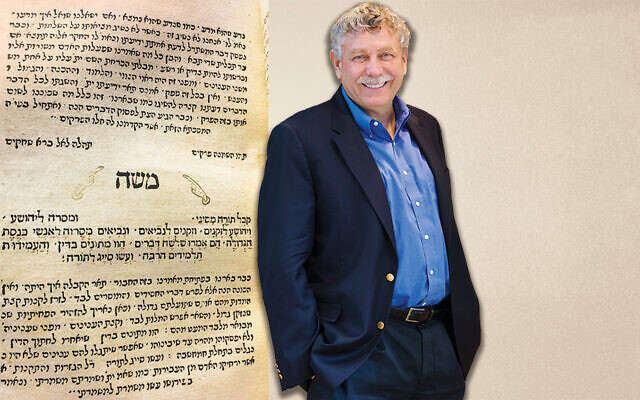 This image from Pirkei Avot is not from the rare 1492 edition selected by Dr. Eric Lander from the LIbrary of Congress, but rather a more common 1485 printing.

No need to wonder whether Eric Lander, the new director of the White House Office of Science and Technology Policy, will address ethical concerns in his advice to the U.S. government.

Dr. Lander, a biology professor and geneticist whose Broad Institute is affiliated with both MIT and Harvard, was sworn into office on Wednesday on a rare 1492 edition of Pirkei Avot, the Mishna tractate whose title commonly is translated as “Ethics of the Fathers.”

As reported by Jack Jenkins for the Religion News Service, the Brooklyn-born scientist met with his family to figure out what book to use as he is sworn into his new post, which President Biden has elevated to a Cabinet-level position.

“I confess I had not thought about the question until they asked,” Lander told RNS. “But once they asked, I had to think deeply about it, because when you choose a text you’re choosing values, or history, or other meaningful things.

“The minute we realized the question was values, we all went to tikkun olam,” Lander said, explaining that tikkun olam has particular resonance in his family: “What is our purpose here? Our purpose is to repair the world, to help others in need of help, to take in strangers, to have empathy.”

That led them to Rabbi Tarfon’s famous teaching in Avot 2:16: “It’s not required that you complete the work, but neither may you refrain from it.”

So Pirkei Avot it would be. But which edition?

It turned out that the Library of Congress had a rare 13-page copy of Avot printed in Naples in 1492. Naples at the time was ruled by Ferdinand I, who was far more tolerant of Jews and their publishing enterprises than his Spanish namesake of Columbus, Inquisition, and Expulsion fame.

“The world has experimented with intolerance, with the view that everybody has to think like I think, worship like I worship,” Dr. Lander said. But “the world experimented in 1492 with tolerance — with the idea that we would have a diversity of people and perspectives. I think the lessons of the 1492 era are lessons for today: coming together and making our diversity an incredible asset for this country going forward.”