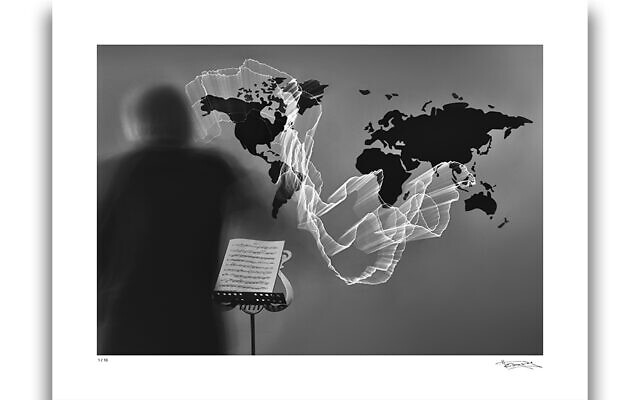 Celebrated artist Harvey Edwards has donated “Homage to Joseph Polisi,” a limited-edition print, to be sold at auction. The proceeds will benefit need-based music education scholarships to the Thurnauer School of Music at the Kaplen JCC on the Palisades.

The work, numbered two of 10, is being auctioned through June 2, in conjunction with the Thurnauer Music School’s annual Gift of Music gala benefit concert, which was held on May 2. The program’s honoree, Joseph Polisi, president emeritus of the Juilliard School, was given the first print of the very limited edition.

Mr. Edwards created “Homage to Joseph Polisi” to emphasize artists’ responsibility to give back to their communities. That is a philosophy that Mr. Polisi championed during his tenure at Juilliard. Mr. Edwards shares Mr. Polisi’s view that art should be an inspiration to the world, and that it is the inherent duty of every artist to create such work.

Representing the dramatic ebb and flow of music, this inspiring work portrays the melodic movement of music as it envelopes the world. Mr. Edwards’ images invoke an emotional response from the viewer, and his goal is for “Homage to Polisi” to achieve that effect.

The auction has an opening minimum bid of $3,000. Proceeds will directly support music education scholarships for students who wish to study music but lack the financial resources to do so.

Edwards’ works hang in the Pompidou in Paris and the Los Angeles County Museum of Art. His commissions include Galerie Pierre Hautot in Paris, Royal Festival Hall in London, the Wang Celebrity series, and the Long Beach Museum of Art. He is the author of two published books.

The JCC Thurnauer School of Music is renowned as a center of artistic and educational excellence open to all. The school has inspired thousands of students and families, transforming lives and sharing the joy of music through outstanding instruction, concerts, master classes, community events, and partnerships with local schools. The Gift of Music gala benefit concert raises funds for music scholarships. Since it opened, Thurnauer has awarded more than $3 million in need-based scholarships. Its 31st annual Gift of Music gala benefit concert, “Raising Artists, Impacting Our Community,” is online through June 2. To bid, go to giftofmusicgala.org/auction. For information, call (201) 569-7900 or go to JCCOTP.org.