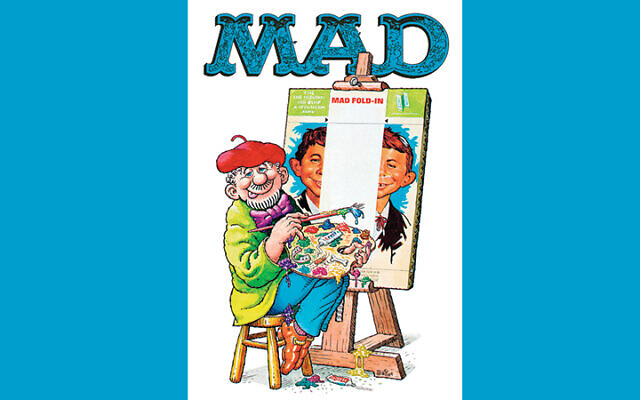 Back in 1976, Mad Magazine celebrated the American bicentennial with a special supplement that imagined how the “usual gang of idiots” on the magazine’s staff would have covered the events of 1776.

Anthony Prohias set his “Spy vs. Spy” shenanigans in the 18th century, with military horses, sabers, and tricorne hats.

And Al Jaffee contributed one of his trademark “Fold-Ins.” In its flat form, the page features an illustration of a colonial-era ship being unloaded. It asks the question: “What will one of our current international trade policies add to future history books about America?”

When properly refolded, the page reveals a manacled African hand, and the answer: “A black page.”

That cartoon still seems timely some 44 years later, the week when Mr. Jaffee’s retirement was announced.

He’s 99 years old now, so you might say that Mr. Jaffee has earned the right to put his satiric pen down. But still this is a somewhat forced retirement. Mad Magazine is no longer publishing new material, it’s the victim of changing media markets, shifting youth tastes in comedy, and a corporate owner, AT&T, that already has more than enough high-profile fights with a presidential administration that makes the Nixon gang of Mad’s heyday seem comparatively thick-skinned.

Mr. Jaffee, an American-born Jew, spent a few years of his childhood living with his mother back in the impoverished Lithuanian shtetl where she grew up. Perhaps the inevitable questions around this experience sparked his series of “Snappy Answers to Stupid Questions.” To take one 1976 example: A man being held up by a pistol-toting robber (while police doze in a patrol car nearby) asks: “Are you holding me up?” To which the robber replies: “Why, are you falling down?”

Mr. Jaffee told the Washington Post that his career, which started in 1942, never seemed like hard work, because he loved what he did. “I guess I’m childish in a way,” he said. “I’m living the life I wanted all along, which was to make people think and laugh.”