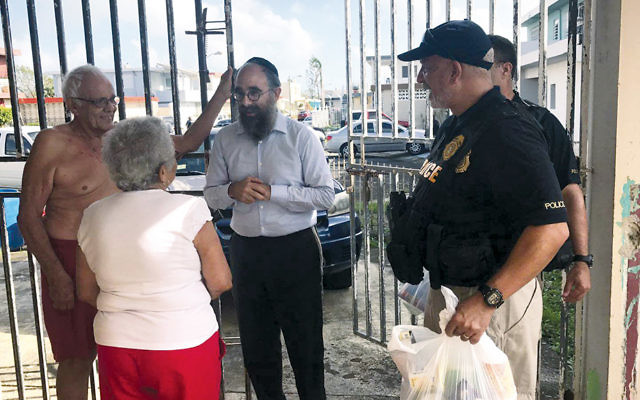 Rabbi Mendel Zarchi and his wife, Rachel, had prepared hundreds of meals for Rosh Hashanah. Their Chabad of Puerto Rico usually hosts many tourists in San Juan during the high holidays. But with Hurricane Maria hitting the island on the eve of the Rosh Hashanah, the tourists canceled.

Instead, the Zarchis and volunteers handed out the meals to hungry residents of San Juan as the post-storm relief efforts began.

The Chabad building in San Juan, inaugurated last year, weathered the storm with little damage. It has its own generator and its own water cistern, so Rabbi Zarchi was able to work on helping his neighbors.

And as the relief efforts got under way, they received important assistance from northern New Jersey.

For one thing, Rabbi Zarchi’s brother-in-law, Rabbi Chanoch Kaplan, who is married to Mimi Zarchi Kaplan, lives in Franklin Lakes, where he runs the Chabad Center of Northwest New Jersey. After the hurricane, he pitched in to coordinate relief efforts.

That included sending three planeloads of supplies as well as dozens of pallets of supplies sent by ship, Rabbi Kaplan said.

Some were to be distributed by Chabad, others by an organization called PR4PR, which has run summer camps in underprivileged San Juan neighborhoods for 14 years. That organization was founded by Harry Orlinsky of Teaneck, who also was one of the people behind the founding of Chabad Puerto Rico 18 years ago.

“Our plan is to coordinate with local religious entities, together with PR4PR, to have them distribute the supplies from their centers,” Rabbi Kaplan said.

Rabbi Kaplan also has been coordinating fundraising for the relief efforts and maintaining Chabad Puerto Rico’s website. “They’re off the grid,” he said. And, he added, “All the banking is down there.”

The Chabad center is two blocks from the beach, between the Hilton and the Ritz Carlton hotels.

“It is heavily attended by the tourists who are coming through,” Rabbi Kaplan said. “They offer a minyan three times a day and usually have packed services every Shabbos. This is the first time in years that nobody has come for services any day this week.”

The Chabad house sustained some damage, mostly from rain that came through the windows. The roof of Rabbi Zarchi’s house collapsed. Still, he is working on relief efforts to help others.

“Chabad has a crew of volunteers who have been trying to determine where these people are and if they are in fact safe,” Rabbi Kaplan said. “They’ve been delivering food all over San Juan, out to the suburbs, as far as they can go.

“One of the limitations of the relief efforts is that there is gas rationing. You can’t travel to the furthest sites. People are trying to locate family they haven’t heard from, but to drive an hour and a half to locate a person is impossible.”

As the situation in San Juan improved early this week, Chabad organized an eight-person team to venture into the more isolated parts of the island, which had not seen much improvement. 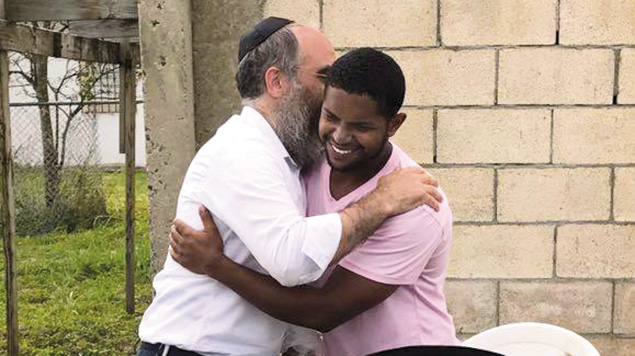 Portable electric generators are among the supplies Chabad has distributed, and Rabbi Zarchi hopes to buy and give away more of them. “He’s hoping to raise money and get donations of a few hundred generators,” Rabbi Kaplan said.

“If the expectation was they would be without power for a week or two weeks or a month even, that could be survivable,” he added. “But most of the water on the island is electrically pumped. Without electricity there is no water, no communications. People are saying it will likely be six months to be completely restored.”

Mr. Orlinsky’s involvement with Puerto Rico began 25 years ago. He went down with a bunch of potential real estate investors, but he was the only of them who decided to invest. He had real estate holdings on the island until three or four years ago.

From the first time he went to Puerto Rico, he felt the lack of an Orthodox community there. “I wear a yarmulke all the time,” he said. “People would approach me — travelers and people living there. There was no Jewish support. There’s a Reform shul and a Conservative shul, but when I reached out to them I got no response.”

Then he got in touch with Chabad in Brooklyn.

Nineteen years ago, “they told me they’re coming down,” Mr. Orlinsky said. “The most amazing young couple came with a baby.”

Now the family — the Zarchis — has grown to include six children. During the storm, only the youngest was with the parents. The rest were studying in New York.

“They’ve created a most amazing environment of chesed,” Mr. Orlinsky said. “It’s really a great example of what Chabad does.”

Saul Scherl of Englewood worked with Rabbi Zarchi and Mr. Orlinsky to raise the money for the Chabad house that opened last year. Mr. Scherl’s company managed the construction.

“I had a real estate company that did a lot of work in Puerto Rico,” Mr. Scherl said. “I used to go pretty much weekly. Now I probably go once a month.

“I’ve enjoyed doing business down there. It’s a nice place to work. The people are really nice. Even before the storm they’ve been going through really tough economic times. That’s been a struggle for the residents and all the businesses.”

After the storm, “It’s going to be a long haul back,” he said.

“People are trying to get back to work. On the construction side, they are limited by the materials. None of the credit card machines are working. It’s been a real struggle.”

Mr. Scherl has been working to raise money for Chabad’s relief efforts. “I’ve been reaching out to Jewish organizations and synagogues,” he said.

Chabad planned its building to withstand hurricanes. The concrete structure was designed to weather most storms.

“Unfortunately, we didn’t put hurricane shutters on all the windows on the second floor,” he said. “We ran out of money.”

Now, “It is something we’ll definitely do.”

“My heart goes out to the people of Puerto Rico,” he said. “The pictures are devastating. A lot of people on the island started with very limited resources and were really affected by this. People lost their homes and everything they had.

“Whoever can help should help. The pictures speak for themselves. It’s heart-wrenching. Hopefully they’ll get the support they need. Rabbi Zarchi is worried. It’s hard to watch people leave. He knows in the long term he’s going to come back and be stronger, but it’s going to take some real effort to get there. His ability to go out and help people is remarkable.”