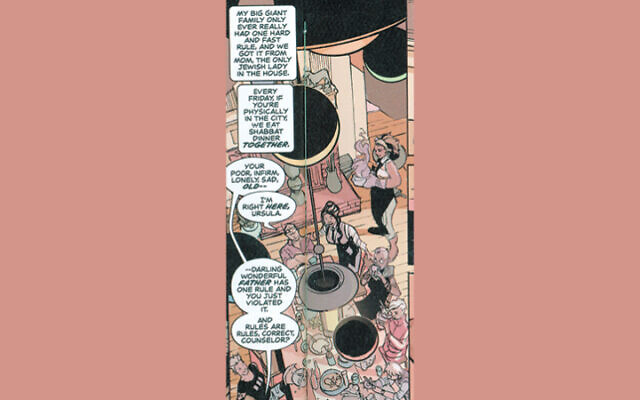 On their podcast, Judaism Unbound, hosts Dan Libenson and Lex Rofeberg speculate from time to time about the possibility of a Jewish practice becoming popular in the general culture, divorced from its religious origins. The model they look at is yoga, which began as an Indian practice, rooted in Hindu religion, but has become a non-sectarian form of wellness exercises.

So what Jewish practice is ripe for appropriation?

My money is on Shabbat dinner.

The latest indication of that comes in the premiere issue of Matt Fraction’s new comic book, Adventureman. Mr. Fraction is an A-list comic book writer who has written series ranging from the Fantastic Four to Sex Criminals. In Adventureman, he invents two new rosters of characters.

One is a crew of early 20th century heroes and villains, including the titular Adventureman, straight from the world of radio and pulp novels that preceded and foreshadowed comic book superheroes.

The other is Claire Connell and her family. We first meet her reading an Adventureman novel to her 10-year-old son; the next time we see her is at “the weekly Connell family Shabbat dinner,” which includes her father and six sisters.

She narrates the backstory: “My big giant family only ever really had one hard and fast rule, and we got it from Mom, the only Jewish lady in the house. Every Friday, if you’re physically in the city, we eat Shabbat dinner together.”

For Fraction, the Shabbat dinner serves as a useful means to introduce the domestic cast, but we suspect that it will continue as a trope, anchoring Claire as her life starts taking some very non-domestic turns. By the end of this issue, the fictitious world of Adventureman invades Claire’s real world life, and the show gets underway.

In an interview with Josh Weiss of Forbes, Mr. Fraction said that the Connell Shabbat dinners came “from from big Shabbat dinners with a great big found family that Brian and Alisa Bendis host out here in Portland.” Brian Bendis is another A-list comics writer, currently writing the Superman comic book. The Bendis family is Jewish (he went to Cleveland’s Orthodox Hebrew Academy; they met when he did illustration work for Cleveland’s Hillel chapter, while she was on staff there) but clearly not all the guests are.

Other than the use of the greeting “Shabbat Shalom,” there’s no clear evidence of Jewish rituals at the Connell Shabbat table. There’s a bottle of wine, but no candles are visible in the illustrations by Terry and Rachel Dodson. That’s in contrast to the time Superman visited his Daily Planet colleague Josef for a Shabbat dinner back in 2006, in Action Comics #835. There the emphasis is on the ritual, which provides the occasion for what I consider the most mind-boggling sentence ever uttered by the man of steel: “I’m familiar with kiddush.”

Readers of Adventureman have not yet had the opportunity to be familiar with kiddush and perhaps they never will; after all, Claire’s father, the family patriarch, is not Jewish.

But then, if Shabbat dinners are becoming an American thing, what Heschel might call “a yoga in time,” it’s possible that the text of kiddush will be left behind.