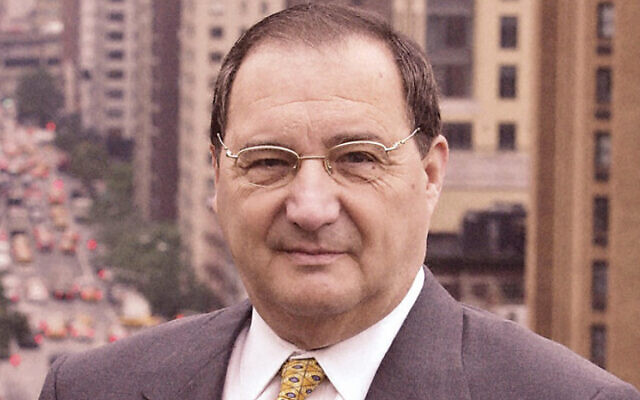 When most people say, right now, that they’re cautiously optimistic about the future, well, yeah, right. Sure they are.

His life experiences — born in prewar Poland; separated from his parents and brought up as a Catholic there until he was 5; separated once again, this time from the woman who’d functionally been his mother and who had loved him; reintroduced, bit at a time, to Judaism; living with his parents in a DP camp in Vienna; coming to this country, flourishing, yes, but working for the Anti-Defamation League for 50 years, most of them at its head, and thus exposing himself to the worst of the anti-Semitism that always has lived under the country’s slimiest rocks — could so easily have made him perpetually pessimistic, but they have not.

Mr. Foxman, who lives in Bergen County — the many death threats he’s gotten have led him to request that vagueness — turned 80 on May 1. Five years ago this month, right after he turned 75, he retired from the ADL.

Now, he looks back, but characteristically for him he spends much more time looking ahead. He’s an optimist, but he’s also a realist. He has no idea what to expect.

“What will the impact of the coronavirus pandemic and the economic disruptions and the racial injustice flare-ups be on the future of the American Jewish community?” he asked rhetorically. “Who knows?

“We know that whenever there is economic and political upheaval, minorities bear the brunt of it. Jews certainly know that. We know that things will change, but to what extent no one knows.

“A number of Jewish institutions will change, and some may not survive. Families that support organized Jewish life will feel poorer, and we will all compete for public dollars. That’s especially true now, after the social justice revolution.

“And there is an election coming up, which is going to be very polarizing and very very ugly. How well the Jewish community will do — how well it will adapt to make tough choices, how it will compete for its survival in terms of finances — no one knows. All we have is a lot of questions. We have no answers.”

Looking back across his 80 years, he finds no echo of today. “This is a perfect storm,” he said. “We’ve had economic crises, social-issue crises, international crises, but they’ve not all come together like this. And it will impact America’s role in the world.”

Jews, he said, “have to be smart. We have to be very smart in our advocacy, in where we stand, in whom we support.”

The issue that worries him the most is a bit of a sleeper in this noisy world, although it would have been top of mind at almost any other time. “It’s the issue of annexation,” he said; specifically, it’s about Israel annexing some of the West Bank. The plan, to understate, is highly controversial. “We are coming up to an election season, and Israel will be an issue. Everybody is against anti-Semitism. That won’t be an issue.” Yes, he conceded, certainly there are anti-Semites in the country, and virulent strains are growing again, but no politician will be openly in favor of it. Israel, though, can serve as a lightning rod; we’ve seen that happen already, and Mr. Foxman is afraid that the trend will continue and intensify.

“I have no problem in asking every political candidate if they support Israel, its existence and its well-being, and using that as a litmus test,” he said. “But I don’t want the litmus test to be ‘Do you support annexation,’ and I am afraid that it will be.

“Will this help Israeli democracy and the Jewish people? My answer is no.

“It’s not even akin to the threat from Iran. That is an existential threat. Annexation at this moment is not in the existential interest of the state of Israel. I know that many Israelis disagree, and it is their call, but they also should take a look and see how it will serve the Jewish people. They should see how it is affecting the American Jewish community and the American political system, and ask if it’s worth it.

“They are already seeing a backlash. I hope they understand that this is not the best time to do this.”

There is an irony to the situation, Mr. Foxman added. “The whole issue of annexation is the result of the United States’ peace plan. Trump’s peace plan. That’s what raised it.” (That was the long-awaited plan that Donald J. Trump’s son-in-law, Jared Kushner, unveiled in January.) “So America has a role to play, and so does our political system, and so does the American Jewish community. It is Israel’s sovereign decision, but they should look at how it will impact their friends and allies.

“The question of annexation should not be part of a litmus test of support for Israel,” he summed up. “The debate in Israel is making it part of the political debate here, which is unnecessary and unproductive; I do believe that it is counterproductive for the support that Israel needs to maintain from our community and from the body politic.”

Mr. Foxman moved on to the tense subject of racism and policing in America. “Ironically, in Jewish history, the police usually have been our enemy, in Bialystok, in Damascus, in Berlin. All over. The Jews knew not to turn to the police for protection or support. But in the United States, the police have been seen as an ally of the Jewish community. So the irony of today is that the police, who were our enemy globally, historically, we see as our supporters, protectors, and friends in the United States.

“Now we wake up one morning to find that they are the enemies of one of our allies, an ally with whom we share a history of persecution. It is a very difficult position to be in.

Danger lurks, as does nuance.

“Three years ago, Black Lives Matter was seen as an anti-Israel entity, and many Jews who had supported it until then turned against it because of that. “We have to be alert and we have to be smart not to permit this issue to separate us from our allies. And our allies here also are the police. And they are also the African-American and Latino communities. That is a delicate line to walk.

“Supporting our allies shouldn’t make us the enemy of our other supporters.

So, Mr. Foxman, do you have any hope?

“Yes, I always have hope. I do believe that what President Obama said is true. This is different.” (Last week, at a public online forum, Barack Obama said he sees a “change in mindset that’s taking place” about systemic racism, both in American policing and in American culture; he said that he thinks that this time change is going to come.)

“Change takes time. Prejudice is deep — God, we know how deep prejudice is. We know how hard it is to change people’s hearts and minds.

“The civil rights movement hasn’t gotten as far as it should have, but compared to the way it was, we’ve made progress. Slow progress.

“I believe that what is going on now is different because what we are seeing in the streets is not an African-American protest. It is an American protest. In some demonstrations, you see more white people than black people. And in some places police are taking their knees.

“This is new. This is different. It is not universal, but everything has to start somewhere.”

Mr. Foxman also thinks that a change in leadership is coming. “It is tragic that we needed a pandemic and racial pain to wake up some in this country to the realization that we need a political change,” he said.

He’s heartened by Colin Powell’s statement — Mr. Powell, the former secretary of state, retired general, former head of the Joint Chiefs of State, announced last week that he was not able to vote for Donald Trump. Instead, he will vote for Joe Biden.

Mr. Foxman has known Mr. Powell for a very long time. They met at City College. When they talked, they’d sprinkle Yiddish into their English; Mr. Powell, who grew up in the Bronx, worked at a shul there, and heard about the Holocaust from the survivors to whom he’d grown close.

Back in the present, Mr. Powell “spoke out,” Mr. Foxman said. “Republicans are starting to speak out.

“It’s ironic that this pain and suffering will bring people to see the lack of leadership, and hopefully that will bring change closer. So I am hopeful. I am more hopeful today than I was three months ago.

“Golda Meir said that Jews don’t have the luxury of being pessimistic,” he added. “How dare I be pessimistic about the Jewish future, after having survived what I survived? It is the perspective. To me, the glass always has been half full. Even in tough times, we have prevailed. We have succeeded. And we will again. But we have to be smart. We have to understand who we are and where we came from, and without arrogance, but with sensitivity and wisdom, we have to move forward.”

The U. S. Congress was to have honored Mr. Foxman last month as he turned 80 and the government marked American Jewish Heritage Month. The novel coronavirus made the celebration impossible this year, but Mr. Foxman, ever hopeful, looks forward to the rescheduled commemoration next year. “I am very lucky,” he said. “I’ve lived through a couple of miracles, and I am very very lucky to have survived, to be able to serve, to have tried to make a difference.

“I have a family, and there is Jewish continuity. It is all wonderful.”