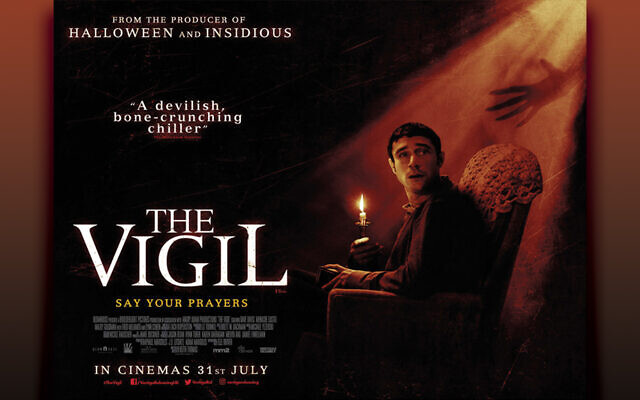 The premise of “The Vigil,” a horror movie being released into wide distribution in August, is that the lead character, Yakov, played by Dave Davis, can’t leave the house.

But the cause of the claustrophobic setting is not a plague, but rather Jewish law: Yakov has been hired to be a shomer, standing guard over a dead body before it’s buried.

The film takes place in Chassidic Brooklyn, and much of the dialogue in the trailer that was released this week is in Yiddish. “The Vigil” features appearances from veterans of the nascent Williamsburg Yiddish film scene, including Menashe Lustig, who starred in “Menashe,” and Malky Goldman, who appeared in “Unorthodox.”

The Hollywood Reporter praised the way writer/director Keith Thomas “transforms Orthodox culture into gory material for a slightly elevated horror flick, with Yakov ultimately turning to Hebrew prayer as his only way out of hell.”

It’s not yet clear where “The Vigil” will screen in the United States, given that we still can’t leave the house, but it is opening around the world in coming weeks. It is being distributed by Blumhouse, the production company that is responsible also for “Get Out,” “The Purge,” and other recent horror movies.

Meanwhile, we look forward to seeing what has to be the scariest Yiddish flick since 1937’s “Der Dibuk.”