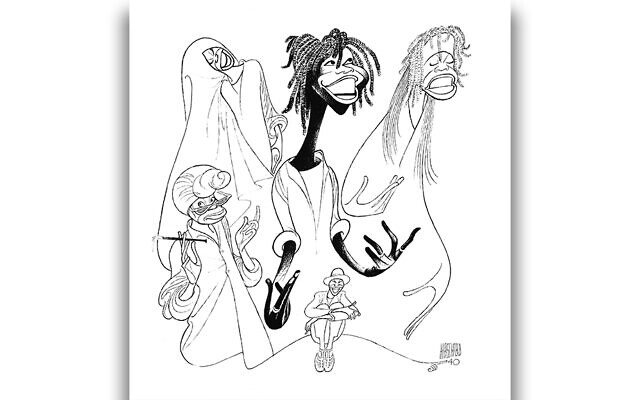 Whoopi Goldberg, ink on board, 1984. © THE AL HIRSCHFELD FOUNDATION

Talented, world-famous … and humble. Not three words generally used together. Yet, says David Leopold – creative director of the Al Hirschfeld Foundation and author of “The Hirschfeld Century: A Portrait of an Artist and His Age” – Al Hirschfeld was precisely that.

And Mr. Leopold should know. For 13 years, he visited Mr. Hirschfeld in his studio once or twice a week.

“I was doing research for an exhibition for a public library on the performing arts and I was researching various artists,” Mr. Leopold said. Deciding that he wanted to learn more about the artist, “I wrote to him — and he invited me to tea.” After that meeting, the artist asked his visitor, who was 24 years old then, to put together an archive of his work. Mr. Leopold had grown up loving Mr. Hirschfeld’s work, but he was surprised — and thrilled — by the invitation. “I had no idea what he saw, but thank God for him seeing it,” he said.

On August 6, Mr. Leopold will present “The Solo Show as Seen by Hirschfeld,” on Zoom for the Kaplen JCC on the Palisades for the JCC U. “His drawings stand as one of the top innovative efforts in establishing the visual language of modern art through caricature,” Mr. Leopold said; in his talk, he will pay special attention to drawings of actors appearing in one-person shows. “Some of the portraits we will be looking at include Whoopi Goldberg, Lily Tomlin, and Christopher Plummer, and of course we will also be counting the ‘Ninas’!” (Hirschfeld’s daughter’s name is Nina, and he famously hid the name in most of his drawings.) The virtual presentation will take place from 11 a.m. to noon. (See below for details.)

Describing his visits to the Hirschfeld studio, Mr. Leopold said, “It started off informally. We would be there all day, each doing our own thing, and we would break for lunch, or tea. We talked all day while doing our separate jobs. I would hold up something and say, ‘What is this?’ He would lean back in his barber’s chair – he called it the last functional chair in America – and ask where I found it. He was allergic to talking about himself,” but happy to talk about his subjects. “He was interested in the drawing, completely involved in his art. Drawing was who he was.”  Hirschfeld, he said, drew all day, went out every night, and then started again the next morning. 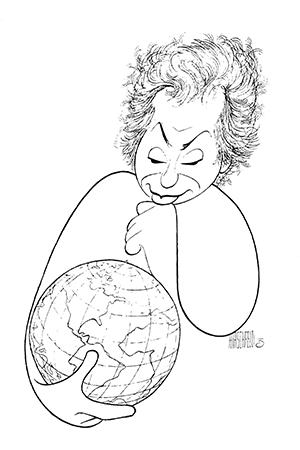 Jackie Mason in “The World According to Me,” ink on board, 1986. © THE AL HIRSCHFELD FOUNDATION

The artist was 86 when they first met, Mr. Leopold said. “I first turned down the archivist job. I thought, how long can this last? I didn’t realize that he had zero plans for passing away. He drew to the day before he died,” at the age of 99.  “He never lost any of his power.” In fact, Mr. Leopold said, you could argue that Hirschfeld’s work grew better with time. He cited the image of Tommy Tune, done in Hirschfeld’s last months, “which captured Tommy Tune’s very simple elegance, and Hirschfeld’s too.”

Al Hirschfeld – best known for his caricatures, particularly those of theatrical celebrities– was extremely successful, Mr. Leopold said. He first tried his hand at sculpture, and later turned to representational painting. “Museums collected his works,” Mr. Leopold said. Then Hirschfeld went to Bali – a trip that changed his art forever. “The sun was so bright that it bleached out all the color,” Mr. Leopold said. “His real love affair with lines began.”

It was the 1920s and ’30s, “a great time to be an artist working for publications,” he continued. Hirschfeld published his first caricatures in 1925 and went on to supply three newspapers with regular contributions. He also did posters for movie studios – six different posters for every film -— producing iconic drawings, for example, of Laurel and Hardy, the Marx brothers, and “The Wizard of Oz.” “His audience was in the hundreds of thousands in New York, but his work was seen all over the world,” Mr. Leopold said. “In 1939 he was doing artwork for over half of MGM films.”

As popular as he was, “He didn’t do it for an ego trip,” Mr. Leopold said. “It was the magic of art. He was capturing their personalities. He took the character created by the playwright and played by the actor and reinvented it for the reader. Animators study his art. One drawing is equivalent to 24 frames.”

Mr. Leopold talked about Whoopi Goldberg drawing, citing its “sense of activity. It’s a two-dimensional drawing, but it seems to move.” And how did Hirschfeld accomplish this alchemy? “He didn’t know. It was his point of view; how he saw the world.” His drawings “show action but don’t tell the plot. He’s trying to capture the energy of the production.” Hirschfeld often would watch a show so intently that he didn’t know what it was about. He was trying to capture the experience of the show, not what happened. “He lived completely in the present. It kept him perpetually youthful. 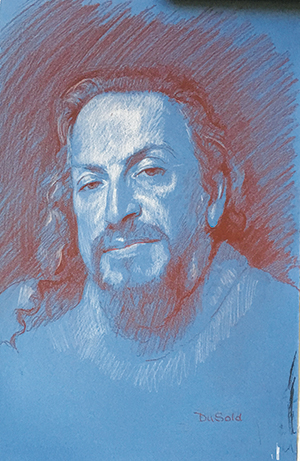 “He was the only one who did what he did, capturing a performance in a unique style. It wasn’t pejorative, though it was exaggerated at times to emphasize parts of a personality. He made the person look more like the person than the person did.” He would also include words. “He kept a pad in his pocket. He drew in the dark, like typing. It worked for him.”

The drawings “are an accurate reflection of who he was as an individual,” Mr. Leopold said. “The longer you look, the more you get out of them, and him. He was incredibly well read, and he knew everybody. He was a Zelig character. He was with President Johnson when Martin Luther King called from Selma. Wherever he went, he was offered the key to something. He had charisma, without saying ‘Look at me.’ He had a genuine love of life, and his art was a reflection of who he was. It was hard not to respond to his joie de vivre.”

The Hirschfeld Foundation was created when the artist died. “There were always people who needed his work,” Mr. Leopold said, explaining that the artist supported many causes but shunned publicity. In 2008, the foundation worked with the New York Board of Education to create a curriculum that explores the arts through the lines and shapes the artist produced. “We’re taking it to underserved students all around the country,” he added.

Asked if he had a favorite Hirschfeld drawing, Mr. Leopold – who is spending his quarantine days on a small farm in Bucks County, Pennsylvania – seemed a bit taken aback. “Do you have a favorite child?” he asked.

For more information about the foundation or to see Mr. Hirschfeld’s drawings and exhibitions of his work, go to alhirschfeldfoundation.org

Who: David Leopold, creative director of the Al Hirschfeld Foundation

For Whom: The Kaplen JCC on the Palisades

How: On Zoom; you’ll get the link when you register