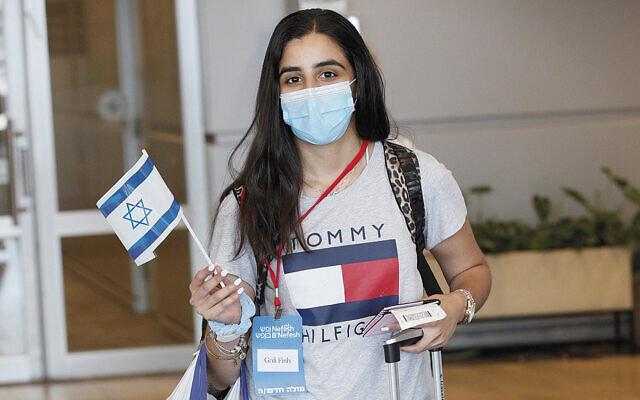 Gali Fish, 19, pictured right, who grew up in Fair Lawn, made aliyah with Nefesh B’Nefesh. She plans to join the Garin Tzabar program; she will live on a kibbutz for three months before she enlists in the Israel Defense Forces.

“I have always had a strong connection to Israel and my dream is to live there,” she said. “My grandfather always wanted me to serve in the IDF. Now I am fulfilling my dream and his dream by making aliyah and going to serve in the Israel Defense Forces. I am so excited to begin this journey with Garin Tzabar as a Lone Soldier in the IDF.”

One of the organization’s summer group aliyah flights brought 39 new olim to Ben Gurion Airport last week, beginning a wave of hundreds of new olim who are expected to arrive in Israel in the coming months. Interest in aliyah is at a record high now, and the Jerusalem Municipality has just granted Nefesh B’Nefesh a permanent Aliyah Center in Jerusalem.

The flights are in cooperation with Israel’s Ministry of Aliyah and Integration, the Jewish Agency for Israel, Keren Kayemeth Le’Israel, and JNF-USA.

“I am delighted to welcome the new North American olim, who join more than 7,000 Jews from around the world who have made aliyah in recent months,” MK Pnina Tamano-Shata, Israel’s Minister of Aliyah and Integration, said. “Despite the challenges the pandemic has caused, the State of Israel has always been and will continue to remain open for aliyah, during the best of times as well as times of crisis.”