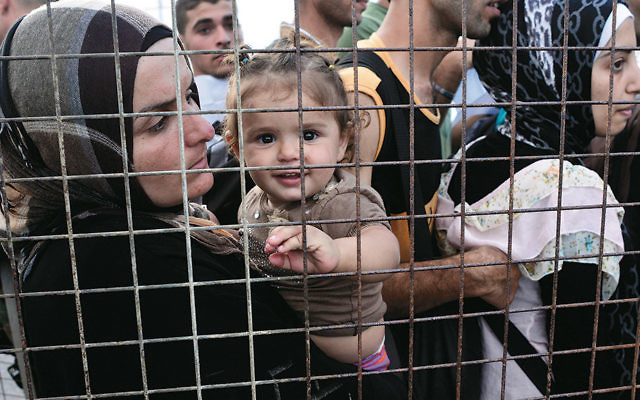 Migrants and refugees with temporary documents board a ferry at the Greek island of Kos on August 14 for a trip to Athens. (Milos Bicanski/Getty Images)

Some 184 Jewish congregations and communities in the U.S. signed a pledge of support for refugees, promising to take action to help those seeking shelter in the country.

The “Welcome Campaign” is being organized by the refugee support and advocacy group HIAS (formerly the Hebrew Immigrant Aid Society), which was founded in 1881 to help Jewish immigrants fleeing pogroms in Russia and Eastern Europe.

The letter — “an affirmative statement in support of welcoming refugees” to the United States — says signatories will support refugees in various ways, including through education, advocacy and fundraising, and on the local level.

“The American Jewish response to the largest refugee crisis recorded in history is really about who we want to be as American Jews,” Rabbi Jennie Rosenn, vice president of community engagement at HIAS, said in a statement.

“All across the country, local Jewish communities are acting on their values and insisting as Americans and as Jews that desperate families be given the chance to rebuild their lives in safety. Together, we are refusing to be silent bystanders at this historic moment.”