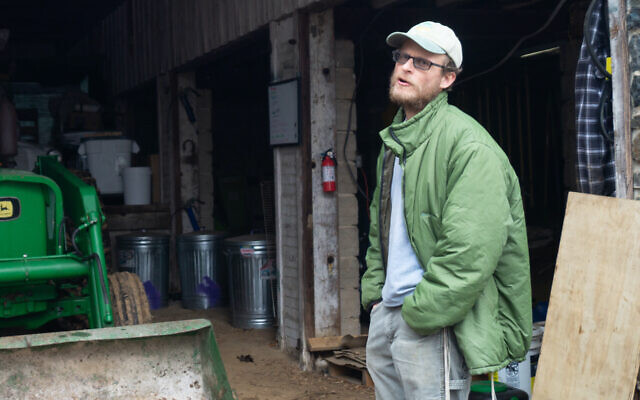 Ian Yosef Hertzmark at his farm in Randallstown, Md., in February. His sales of flour have more than doubled during the pandemic. (Mike Tintner)

But while many companies continue even now to suffer from dramatic drop-offs in business, Migrash Farm saw its fortunes rebound almost as quickly as they had sunk. By the middle of the month, the farm’s lost orders had been made up more than twofold as retail customers rushed to buy up dry goods wherever they could.

“It just kept going and going and going,” Hertzmark told the Jewish Telegraphic Agency. “We’ve just been filling the flour void and milling our heads off. It’s pretty awesome.”

Crises create opportunities, and the coronavirus pandemic is no exception. For local food purveyors, these are boom times. With supermarket shopping suddenly a health-threatening endeavor and some pantry staples hard to reliably procure, local food producers have seen a surge of interest. And for those with a stable supply chain and the ability to sell online, the coronavirus has proven to be good for business.

Over the last few years, Migrash Farm (Hebrew for for “field”) has emerged as the nexus of an emerging local grain economy in the mid-Atlantic region.

Hertzmark personally grows grain on a 30-acre parcel in Randallstown, Maryland, where he lives with his wife and children, and buys in supply from five other local growers. He then mills it all in an old barn whose foundation dates to the Civil War and sells it online and at local farmers markets.

“The wave of local grains is coming,” Hertzmark told JTA in February. “The large-scale centralized system is showing its weaknesses.”

Those words now seem prescient. As the pandemic gained steam earlier this spring, major flour suppliers found themselves unable to cope with rising demand from home bakers. There was no shortage of wheat in the country, but millers were reportedly struggling to reorient their businesses to serve the consumer market, fighting each other for the 5-pound paper bags needed to package retail quantities of flour and the space on trucks to deliver it. 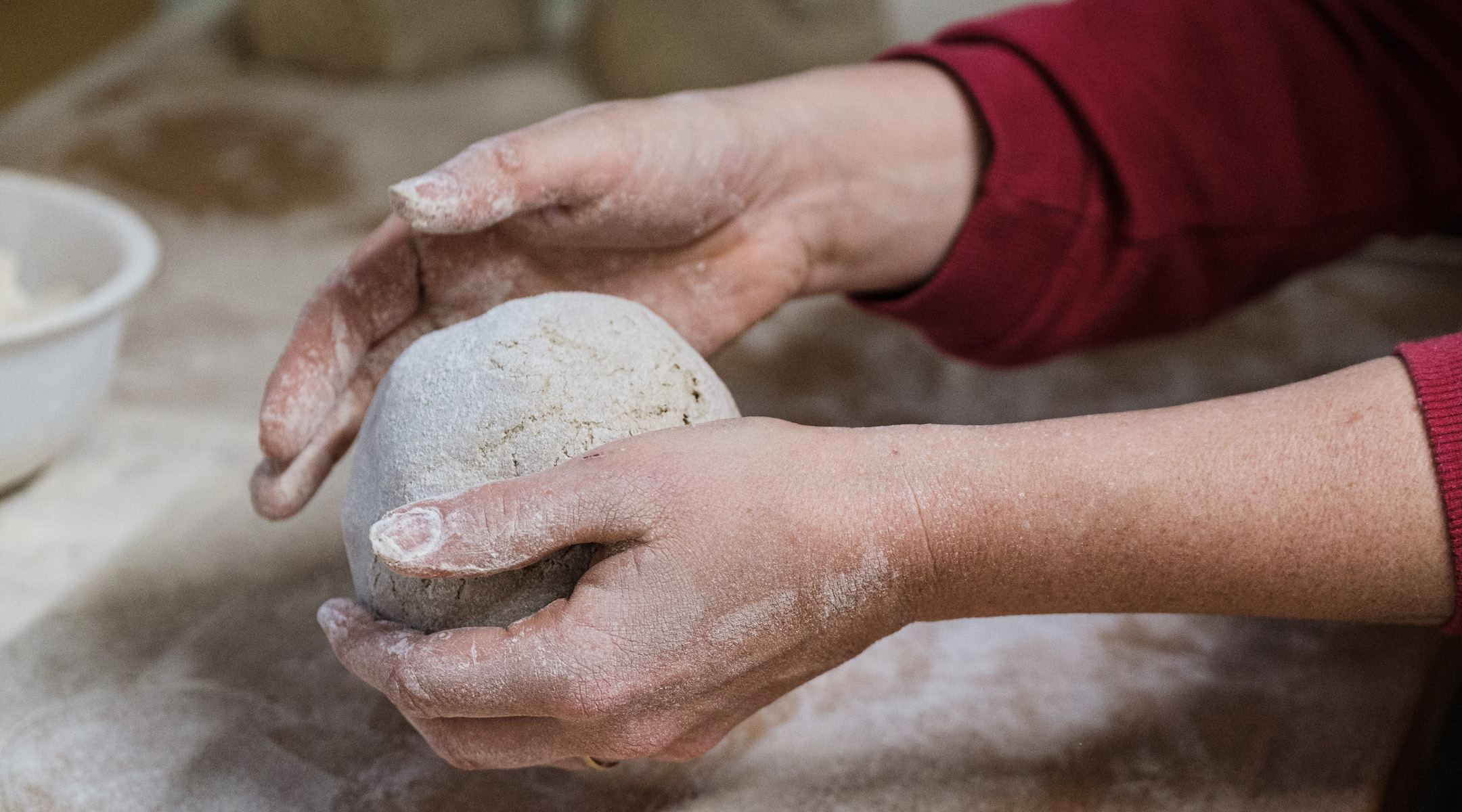 As people have remained stuck inside and the supermarket run has become a health hazard, home baking has surged. (Richard Bord/Getty Images)

Hertzmark saw the first signs of the problem in mid-April after Passover, the eight-day holiday in which eating fermented grains is traditionally prohibited, when his customers rushed to restock their pantries. As the pace of orders began to grow, Hertzmark was forced to reach beyond his regular stable of local suppliers — first to an organic grower in New York, and then to Kansas, where last month he secured 10,000 pounds of grain that he expected would be milled and sold within two weeks.

At one recent farmers market, Hertzmark had to take two vehicles to transport all his pre-ordered flour for pickup.

“The line to pick them up started at 9 a.m. and was roughly 30 people deep until the market closed at 2,” he told JTA. “We didn’t stop handing people their flour until about 2:20, and we still had a quarter of the people not show up to claim their flour. It’s been crazy.”

Hertzmark grew up in Denver and studied botany and wildlife ecology at Colorado State University. Early in his career, he worked as a landscape ecologist and habitat specialist for the state of Colorado and the U.S. Geological Survey. As he grew more religiously observant, he came to appreciate the natural overlap between Judaism and his professional interests.

“You’re remembering the consistent recreation,” Hertzmark said of the blessing recited over wine on Friday nights. “And that just whacked me on my head, especially in light of my job, which was looking at and identifying patterns in nature.”

Hertzmark went on to become a fellow at Adamah, the Jewish farming program in Connecticut, and work as the farm manager at the Pearlstone Jewish retreat center near Baltimore. He later trained as a kosher butcher and worked for the kosher pastured meat producer Grow & Behold for six years.

His former employer has also seen its fortunes rise during the pandemic. Naftali Hanau, who runs the Brooklyn-based meat company, has added butchers, warehouse staff and customer service representatives to his payroll since the crisis hit. For the first time in the company’s 10-year history, he imposed limits on how much customers could buy at a time.

But unlike kosher meat, the availability of which has been relatively stable during the pandemic, flour has been in short supply for months. At bottom, this is simply a function of heightened demand: People are baking more now.

Since flour is shelf stable, it was an appealing choice for consumers who were also stockpiling beans and pasta, particularly in the early weeks of the pandemic.

Hertzmark harbors no illusions that the big players won’t get their act together eventually. The longer-term impact he expects will be felt in changed consumer habits: Will customers return to restaurants en masse when they open? Will they give up the reclaimed domesticity of freshly baked bread? Will they return to commodity flour once they’ve tasted the difference from a small local miller?