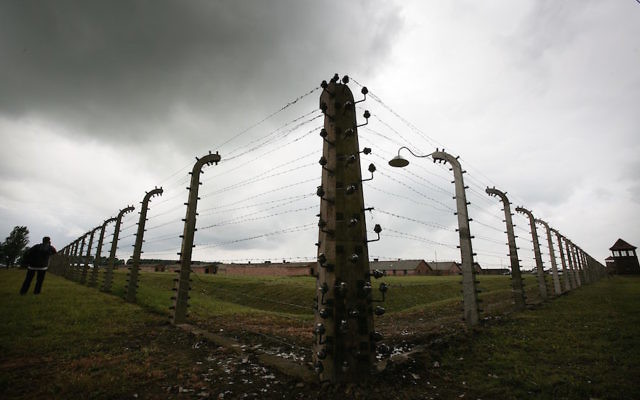 AUSCHWITZ, POLAND - MAY 28: A visitor arrives for the memorial service of the victims of the former concentration camps of Auschwitz-Birkenau by Pope Benedict XVI on 28 May, 2006, Auschwitz. Poland. Pope Benedict is on the last leg of visiting the key places in the life of the late Jean Paul II. (Photo by Christopher Furlong/Getty Images)

WARSAW, Poland (JTA) — The Polish government proposed a bill that would make the use of terms like “Polish death camps” a crime punishable by jail time.

The bill, which the government put forward Tuesday, would prohibit assigning blame to Poland for the actions of Nazi Germany. Historians and artists would be exempt in their work.

Drafted by the Justice Ministry, the measure also would criminalize accusing Poland of international war crimes or crimes against peace or humanity. The punishment would be a fine or up to three years in jail.

“Diplomatic actions to counteract the falsification of our history and protect the good name of Poland and the Polish people have proved ineffective,” the government said in a statement Tuesday. “There are still comments, especially in the foreign media, suggesting the participation of Poland and Poles in the crimes of World War II.”

Anti-Russian sentiment is fueling a nationalist revival in Poland, where some historians, politicians and activists are engaged in a campaign to absolve their countrymen of any wrongdoing during World War II and the Holocaust, which at time shades into revisionist history. In March, the Auschwitz-Birkenau State Museum created software that lets journalists know when they have used the offending term “Polish death camp” and corrects it to read “Nazi death camp in Poland.”

Officials of the Law and Justice Party, which rose to power last year, have honored Poles who saved their Jewish neighbors during the Holocaust. But historians who have looked into Polish complicity have been branded traitors by far-right activists.

Jan Gross, a Polish-American historian who wrote about the slaying of Jews by Poles in Jedwabne in 1941, is the subject of a criminal investigation in Poland opened earlier this year for “insulting the Polish nation.” Gross wrote that Poles killed more Jews during the Holocaust than they did Germans.