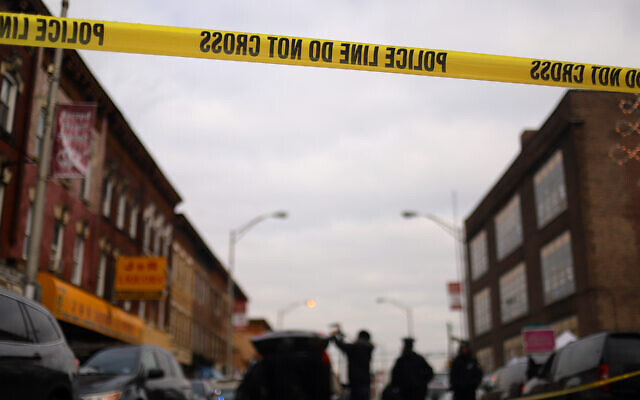 Recovery and clean up crews at the scene of the JC Kosher Supermarket shooting, Dec. 11, 2019. (Rick Loomis/Getty Images)

One of the Jersey City kosher store shooters made derogatory comments about Jews in social media posts, according to the Anti-Defamation League.

The ADL on Tuesday said it had uncovered a Facebook page that it says belonged to David Anderson, one of the two shooters who killed two Jews and a non-Jewish worker at the JC Kosher Supermarket, as well as a police officer at a nearby cemetery. The other attacker has been identified as Francine Graham.

Among other things, Anderson on Facebook referred to Jews as “Nazis” and “Ashke-Nazis” and shared images of Jewish people along with the New Testament verse, “I know the blasphemy of them which say they are Jews, and are not, but are the Synagogue of Satan.”

He also said that Jews created the state of Israel “as an attempt to make us believe that they were the Jews (us) that the bible speaks of and their exodus from Auschwitz was our exodus from captivity.”

Other posts show his hatred for white people, the police and the LGBTQ community, according to the ADL.

Reports last week said Anderson made social media posts that showed a bias against Jews and the police.

State officials said last week they believe the suspects were motivated by anti-Semitic and anti-law enforcement beliefs and are probing possible ties with the Black Hebrew Israelites, a movement of African-Americans who believe they descended from the biblical Israelites. Some adherents hold anti-Semitic views.