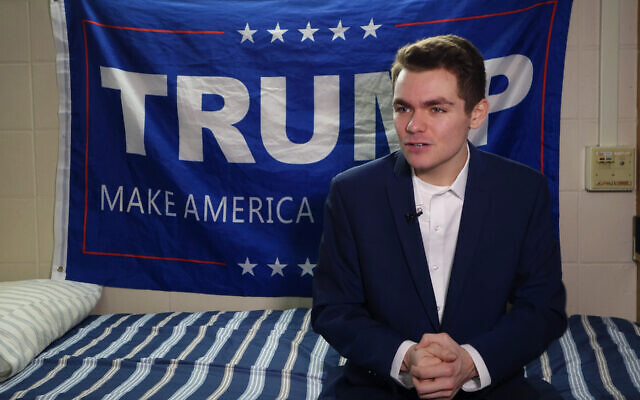 Nick Fuentes answers question during an interview with Agence France-Presse in Boston, May 9, 2016. (William Edwards/AFP via Getty Images)

The young man in the smiley face baseball hat and the Teddy Spaghetti t-shirt had a question for Charlie Kirk, the founder of Turning Point USA, a pro-Trump youth movement. It was about an incident that long predated both of their births, and Kirk knew just what to say.

“Why do you deny the attack on the USS Liberty which is well documented by both U.S. and Israeli sources and which resulted in the deaths and injuries of over 200 Americans?” the man asked Kirk at an October event at the University of New Hampshire organized by Turning Point USA.

“I deny that it was a deliberate attack by the Israeli government,” Kirk replied coolly.

U.S. and Israeli officials long ago concluded that the attack on the Liberty was a tragic mistake. In the midst of the 1967 Six-Day War, Israel mistakenly identified the ship as Egyptian or Soviet and launched an airstrike, killing 34 crewmen. Israel apologized for the attack and paid damages to the United States and the families of the victims, but the incident has nonetheless been embraced by conspiracy theorists as a code for Israeli nefariousness.

It has also been embraced as part of a strategy by the far-right to publicly confront mainstream Republicans and insinuate their ideas into establishment conservatism. Led by Nick Fuentes, a 22-year-old YouTube personality, the so-called “groyper army” has regularly and publicly challenged mainstream conservatives for their views on the USS Liberty as part of a broader effort to paint them as subservient to Israel and unworthy heirs of President Donald Trump’s America first agenda.

“RT if you think that Charlie Kirk and Turning Point USA are not for America First,” Fuentes says in a tweet pinned to the top of his Twitter feed.

At events around the country, groypers have heckled mainstream conservatives and asked provocative questions — often about Israel, immigration and LGBTQ rights — in an effort to unmask them as “fake” conservatives and “frauds.” Named for a more grotesque version of the cartoon Pepe the Frog, which has been coopted by white nationalists, the goal appears to be to move conservatism closer to white nationalism, according to Marilyn Mayo, a senior research fellow at the Anti-Defamation League’s Center on Extremism.

“What they’re trying to do, there’s this whole grouping who refer to themselves as the dissident right, they want to move the Overton window,” said Mayo, using a a term that refers to the spectrum of acceptable political discourse. “They want to make racism and anti-Semitism mainstream.”

Turning Point is a particularly ripe target for that effort because of its emergence as the vanguard of Trump’s following among young adults. Last month, young people disrupted a Turning Point appearance by rising GOP star, Rep. Dan Crenshaw, R-Texas, at Arizona State University. Days later they made headlines when they drove Donald Trump Jr. off the stage at an event the group organized at UCLA.

“What a HUGE victory today,” Fuentes posted on Telegram, a secure messaging app favored by white nationalists, according to The Daily Beast. “Cannot be understated what an incredible win we saw at UCLA.”

Groypers carefully couch their views in code and irony. Provocative questions about race are often wrapped in anodyne terms like “identity” and “demographics.” And at a recent Turning Point USA event in Ohio, a questioner asked Kirk if there were “any awesome, fun dance parties” at a recent speaking engagement in Israel, an apparent reference to the myth that Israelis were caught on video dancing after the Sept. 11 terrorist attacks.

“The reason I wouldn’t call myself a white nationalist — it’s not because I don’t see the necessity for white people to have a homeland and for white people to have a country,” Fuentes said. “It’s because I think that kind of terminology is used almost exclusively by the left to defame and I think the terminology and the labels that we use — I don’t think that we can look at them outside of the context of their connotations in America.”

The strategy appears to be bearing some fruit. In April, Ann Coulter retweeted a Fuentes tweet on immigration. Michelle Malkin, a Fox News regular, criticized efforts to silence groypers, who she described as “truth-tellers.”

“They’ve been trying to figure out since Charlottesville what new tactics can we do to recruit more people and get the attention of the media,” said Mayo. “What we’re really seeing is that some of the views that these white supremacists present at these Q&As are views that some people who are considered mainstream have adopted.”

There has been some skilled pushback from mainstream conservatives. When a heckler in Arizona shouted that Crenshaw is “pro-sodomy,” the congressman capably parried.

“Bring it out guys,” Crenshaw said. “Let everybody know who you are.”

Ben Shapiro, the Jewish conservative pundit, last month called out the groypers at an event of the Young American Foundation, another conservative youth movement that has denounced Fuentes. Shapiro noted that despite his best efforts, Fuentes was not always successful at maintaining an ironic distance from his bigotry.

“You also happen to have the unfortunate habit of saying really disgusting things when you think other people aren’t listening,” Shapiro said, recounting an incident in which Fuentes questioned the number of Jews murdered during the Holocaust by considering whether Cookie Monster could have baked six million cookies in five years. Shapiro then quoted a Nazi official describing how Jews were murdered.

“But maybe he was just being ironic, bro,” Shapiro said.

Howard Graves, a senior researcher at the Southern Poverty Law Center, who tracks the extreme right, said he saw in the groypers a new iteration of the 2016 election, when Trump pushed the Republican party rightward on issues like immigration.

“It is recapturing that spirit of the 2016 election where there is this kind of no-holds-barred insurgent campaign against conservatism,” he said.