YU students at Shaare Zedek Medical Center in Jerusalem. Eliana Farkas of Bergenfield is at right.

Zachary Greenberg’s vision of the start-up nation culture in Israel was “a bunch of smart Israelis in an office,” he said.

That lasted until this winter break, when he went to Israel with 29 other Yeshiva University undergraduates preparing for careers in technology or health care.

“I was honestly blown away by all the skyscrapers full of different companies in Tel Aviv, and especially the companies in Jerusalem,” Mr. Greenberg said after the trip. “As someone who would love to move to Israel someday, I’ve been there several times, but I’d never seen the business side. I saw great company cultures that felt very much like America, and in some cases were more advanced in terms of technology.”

Mr. Greenberg, a 21-year-old junior from Bergenfield, is majoring in finance, business intelligence, and marketing analytics, with a minor in psychology. Last week, he was installed as president of the Yeshiva Student Union. And he was one of 17 students, both men and women, who were selected to take part in the Innovation track. The pre-med track accepted 12 participants.

All the students were housed at YU’s campus in Jerusalem, and they spent a full week visiting Israeli workplaces relevant to their interests.

Eliana Farkas of Bergenfield, a 19-year-old sophomore at YU’s Stern College for Women, hopes to be a doctor and live in Israel one day. She applied for the trip because “I wanted to get a sense of my options, and what I need to do from people who took that step in their lives.”

After visiting Israeli medical schools, including three that offer English-language programs for American students, she gained a better understanding of the pros and cons of attending medical school in Israel or America.

Ms. Farkas said two field trips most fascinated her: the underground bomb-proof hospital on the campus of Rambam Medical Center in Haifa, and the in-vitro fertilization lab at Shaare Zedek Medical Center in Jerusalem. “Israel is at the forefront in fertility advances and we talked about that a lot on the trip,” she said. “Getting to travel around and see science developing all over the country was amazing.” 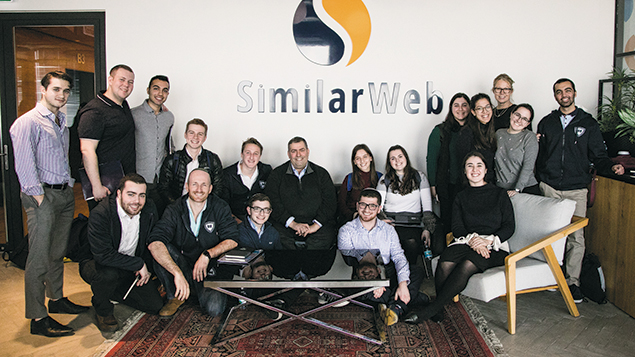 At SimilarWeb, Zachary Greenberg of Bergenfield is on the floor, right, in light shirt, glasses, and beard.

Many of the executives with whom the Innovation group met were YU graduates at companies such as OurCrowd, Vayyar, Innovation: Africa, Microsoft, WalkMe, Aleph VC and Checkpoint.

Mr. Greenberg said he especially enjoyed the Jerusalem-based startup accessibleGO.com, a travel platform for people with disabilities. Its co-founder, Miriam Eljas, had been the editor of the Stern College student newspaper, the Observer.

“Miriam said that being editor-in-chief of the Observer helped her transition to leading a startup, forming a team and writing a business plan,” Mr. Greenberg said. “I found that inspiring. As student leaders, we do a lot, and put in a lot of time, and now I see I am building skills that could really be useful in my career.”

Stephanie Strauss, the executive director of YU Israel, said that this was the third time YU has organized the Innovation winter-break trip for students going into high tech fields. “Innovation has generated a buzz at YU as a wonderful option for winter break,” she said. “We have many students wanting to go on the trip, and many people in Israeli companies offering to host and speak to students and offer internships.”

The pre-med/pre-health track was new this year.

There was some overlap between the two groups. They both went to Zebra Medical Imaging, which Ms. Strauss describes as “an incredible Israeli startup disrupting the way radiology is done across the medical world. Some of the pre-health students may want to be clinical directors at a company like this.”

For Mr. Greenberg, the experience at Zebra opened his eyes to new possibilities for technical skills. “It showed what my major could do for saving lives using data and artificial intelligence,” he said.

Ms. Strauss said that administrators, including Dr. Noam Wasserman, dean of YU’s Sy Syms School of Business, joined in some of the activities and spoke to participants, “so the students had lots of opportunities to reflect on what they saw, and what it meant for them individually.”

The participants are writing papers about what they learned from their Israel experience, and they are staying in touch with one another via a WhatsApp group.

“None of us were friends before and we came out a tightknit group of people,” Mr. Greenberg said. “We had a really fun time and overall it was just awesome.”

“These trips provide students with the opportunity to take what they learned in the classroom and connect with real-world experience and is part of the larger commitment of YU to further engage with Israeli universities and entrepreneurship,” Ms. Strauss added.