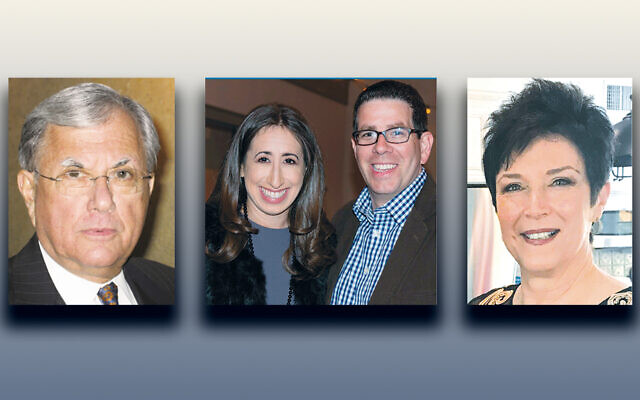 Temple Emanuel of the Pascack Valley in Woodcliff Lake will hold its gala at the shul on March 7, at 7:30 p.m. The night, which includes dinner and dancing, honors TEPV’s Stars — Ed Ruzinsky, Margie Shore, and Renee and Brian Friedman. A digital journal will be created in their honor.

According to Nikki Marsh, gala chair, “We are thrilled to honor these four outstanding individuals, who exemplify the values of our synagogue and our Jewish community. Ed, Margie, Renee and Brian are truly our stars!”

Edwin H. (Ed) Ruzinsky of Saddle River and his wife, Enid z”l, became members of the shul in 1965. Enid became involved with its sisterhood and served as president in 1980, the year the congregation moved from Westwood to Woodcliff Lake. Ed, working with Elliot Blumenthal, developed the financial projections package that culminated as they financed the purchase of the new shul.

Mr. Ruzinsky was president of the congregation in 1986, the year Rabbi Andre Ungar celebrated his 25th anniversary as its spiritual leader. In 1983, the Ruzinskys secured the Holocaust scroll on the bimah from the Westminster Synagogue in London.  In 1994, they were honored by the Jewish Theological Seminary.  In 2005, they began a stained glass window project for the sanctuary and saw it through the completion, raising $1.25 million for the shul.  In 1997, they were honored by Israeli Bonds, which raised more than $1.5 million as a result of their involvement.

Ed joined the board of Jewish Family Services in Bergen County and was its president in 1982. He was elected to the board of Family Service America, a nonprofit umbrella group for 400 social service agencies in North America, and then became its chair.  In 1990, he was invited to join the board of Holy Name Medical Center and became chair of its Finance and Human Resources Committee.  Mr. Rozinsk, a CPA was appointed by Governor Brendan Byrne to the New Jersey Board of Accountancy and he became its president.  He is a retired senior partner of Deloitte, the international accounting and consulting partnership. Enid and Ed have two children, Bruce of Houston, who is married to Linda and is the father of Aaron and Miranda; and Ellen of Westchester, who is married to Joe and the mother of Jason and Adam, who both celebrated becoming b’nai mitzvah at Temple Emanuel.  Ellen, Joe, and the boys live in Westchester.

Marjorie Shore of Congers has been the shul’s religious school administrator for more than 36 years.  She assists Rabbi Shelley Kniaz, the director of congregational education, in planning and implementing programming. Margie has brought technology to the classroom, including smart boards, secured through her writing grant proposals.

She is married to Murray and they have two children, Jennifer, who lives in Westchester and has two daughters, Davie and Lyla; and Michael of Rockland County, who is married  to Paula and has three sons, Richard, Miles, and Leo.

Renee and Brian Friedman of Woodcliff Lake became involved with the Jewish community at Temple Emanuel of the Pascack Valley when they moved there eight years ago. Renee serves as the religious school board of education co-chair, is a member of the shul’s board of trustees, and is the early childhood program’s treasurer. She served on the nominating committee and co-chaired the ECP and religious school’s Handbag Bingo night. Brian’s involvement in the shul’s second Leadership Development Group led to the creation of the Sukkah Social, an event that brought together members from all demographics of the Jewish community, which he co-chaired for five years. He served on the shul’s board, as youth committee chair, and a minyan service leader, and as the Men’s Club co-president for four years, where he hosted well-attended events, including Purim carnivals, guys night out, and Scotch in the Sukkah. They have three children, Eva, Max, and Sam, all Early Childhood Program and Temple Emanuel Religious School students.