Lindsey Rachel Weiss, granddaughter of Gail and Jonathan Lazarus, stands beside the Thundercloud plum planted in her honor on their West Orange lawn in this 2000 photo.

And just how will my garden grow?

Difficult to say, but I’m asking myself the question with greater-than-usual anticipation and emphasis this year, in advance of the spring equinox on March 19. The convergence of all things political, psychological, and seasonal are being felt with a heightened yearning to go greener during this nascent 2020, not necessarily in a global context, although that would be highly desirable, but certainly within the confines of my property lines.

Why not? It all pretty much started in a garden, didn’t it? 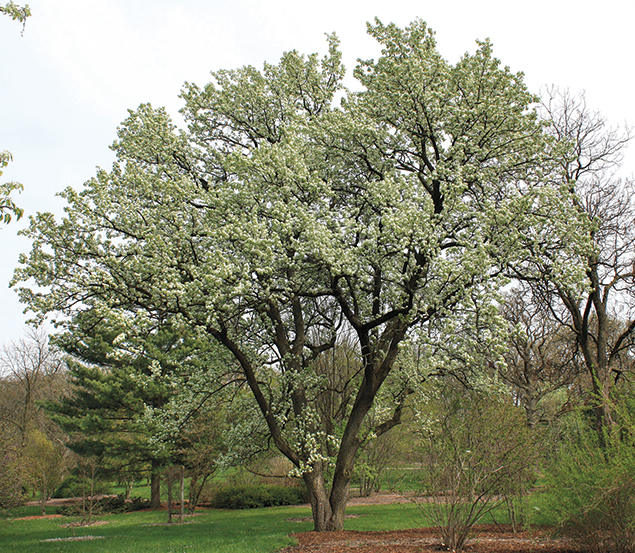 A callery pear tree in bloom.

My cold, appraising stares out the windows suggest remedial action is needed to erase the dinginess and toll that a winter, even a mild one, takes on both the psyche and the landscape, especially in these over-fraught times. The look I want isn’t the clipped formality of an English estate, or the rustic extravagance of a French chateau, or the colorful pastiche of an Italian villa. No, the goal is much more modest; a feng shui and landscape both artful and aesthetic, befitting my West Orange neighborhood but constrained by a purse more suited to Home Depot than House Beautiful.

While little snow has fallen thus far (a bad thing, actually), the end-of-year ice storm dealt the coup de grace to one of three Thundercloud plums on the front lawn. All, unfortunately, had been infected with a dark, pod-like invader from China (can’t blame the trade war or coronavirus for this one) called Black Knot, which has attacked the region’s entire species of Prunus cerasifera. Mine had perhaps one more season left, their coppery purple leaves already wilted by a scourge disfiguringly evident on every branch. Planted to herald the arrival of our grandchildren, now ranging in age from 16 to 22, they managed to achieve a both mature and crowning effect in their foreshortened lifetimes.

Word of the toppled thundercloud was texted by neighbors and reached us in the San Francisco airport. Bicoastal arrangements were made to remove all three trees, and we arrived home just in time to see workers power-saw and mulch them within 30 minutes. The stumps were ground down a short time later, and left the lawn gouged in three places. 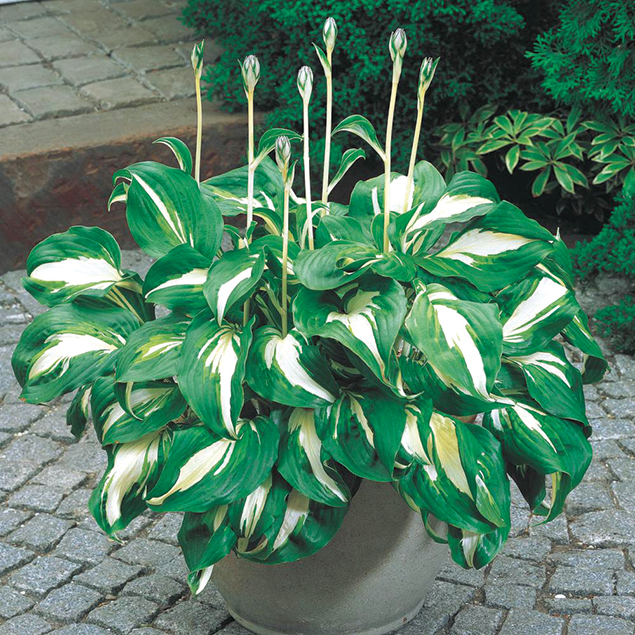 After losing a majestic maple to advanced age, a sturdy ash to the borer moth, a stand of white birches to an earlier ice storm, and now the thunderclouds, perhaps it’s time to let the entire lawn, excluding the shrub beds, of course, go to seed. The scarred areas first must settle and then be amended with fresh topsoil before fescue is applied.

And still unresolved is the fate of three Summersweet Ruby Spice of the clethra alnifolia family I planted last August to replace a twice-failed trio of Oregon-bred rhododendrums. Hopefully, my experimenting with a complete soil change-out and attentive watering will allow these beauties to make it through to their first full season. Right now, they look forlorn and standoffish, their long stems devoid of leaves and flowers. But I only have to cast a sideways glance at my two mature hydrangeas, see them in the same threadbare condition, and know that they will return to puffy-flowered glory in just a few months.

Elsewhere, the heirloom and variegated hostas bordering the south side of the house and most of the backyard promise to reassert themselves after being sheared in full bloom last year by voracious deer, despite my repeated applications of a repellant-smelling natural repellant. As painfully described in an earlier piece for the Jewish Standard, this year’s plan is to place netting over the hostas, in addition to heavy doses of the repellant. These plants are extremely hardy and leafy, but the deer, especially the youngsters, seem up to any task involving mastication. The pain of losing them late last season still lingers, especially considering that some were raised 80 years ago by my wife’s grandparents in Newark. The prospect of viewing them slightly occluded and mottled through the netting, while less than optimal, is certainly preferable to their being eaten down to the nibs again. And I’m also enlisting plastic milk cartons left over from my wife’s preschool teaching days to provide additional cover as the plants break ground. 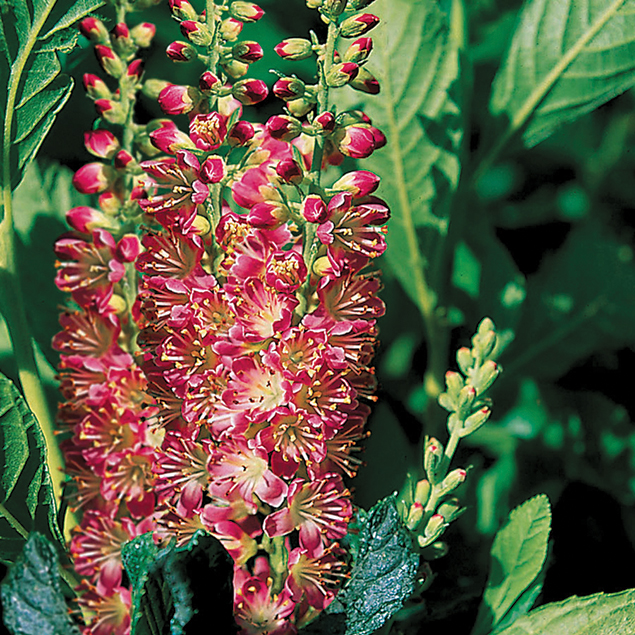 Beyond hostas, I’m excited to see how my eight new emerald yews respond after their first wintering over. Dug into the rocky soil at the rear of the property by a three-man crew in late autumn, they represent the latest battle line in the deer wars. The handsome six-foot emeralds were represented to me as critter-resistant by the nurseryman, whatever that means. And they will have to be. Their predecessors, a continuous line of taxis yews I laboriously planted 30 years ago, were literally nibbled to bare branches, leaving thatches of green just beyond gumline level. Fencing, meshing, and repellant didn’t keep the you-know-who away.

The yews are strategically perched at the fulcrum of my property, where it begins the downslope of the Second Orange Mountain. Besides anchoring the soil, they screen off a neighbor’s pool and several backyards. They also impart a layered look to the rear beds, with hostas and hydrangeas as front sentinels, and dwarf junipers and boxwood variegata forming the middle ranks. The hoped-for tiered effect is “protected” by netting and a say-a-prayer, mesh fence along the back (so-named because the deer simply crash through instead of easily jumping over). Hopefully and eventually, everything will reach maturity for a lush, interlaced look. Fingers crossed.

The cherry tree my parents planted more than six decades ago nestles in the midst of the yews and needed radical pruning last year. Though hollow-limbed and atrophying on the west-facing side, new offshoots had grown eastward, holding out the prospect of another decade of blossoms and fragrance that dazzle for all too-short a period in the spring and rival, in microcosm, the displays in Branch Brook Park and Washington, D.C. It pained me to witness branches amputated, but sometimes less is more. The weeping cherry I added a few summers back is thriving, about 20 feet north of its older cousin. And the two baby Colorado blue spruces angled into the downslope now overtop the cherry after sustained, spectacular growth. Watching their hues change seasonally is an added bonus. 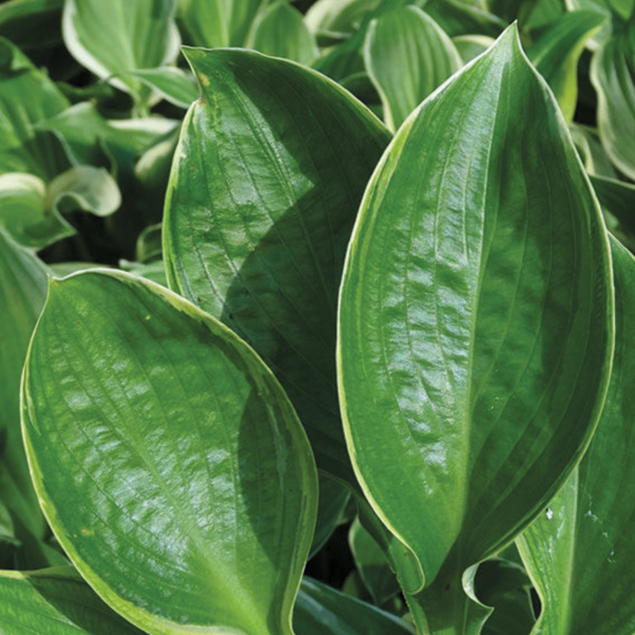 With luck and pluck, the Callery pear tree I planted five years ago survives and prospers after being used as a whetstone by male deer to sharpen antlers or scrape off velvet during rutting season. The testosterone-driven intruders (or is it I who occupy their habitat?) gouged a running wound along the sapling’s lower trunk. But liberal applications of an aerosol-administered, creosote-like substance proved the perfect poultice.

That leaves a 20-year-old hemlock browning out, and three of the four magnificent pines my parents planted still thriving. The hemlock is definitely touch and go, but I want to give it one more reprieve. The pines exceeded 50 feet several years ago and had to be topped after Superstorm Sandy’s ferocious winds uprooted one and it pitched into my neighbor’s backyard. Fortunately, the tree narrowly missed their deck and home. Even more fortuitously, the couple was vacationing at the time and had no idea what happened. I had the shattered trunk and scattered branches removed before they returned, and then debriefed them. They were startled, but grateful.

That’s pretty much the gist and zeitgeist of the garden. I do have work cut out for me this spring, though. Two additional forsythia bushes will need to be added this spring to shore up the line that screens my neighbor’s fence on the north side. And about 40 bags of mulch that I stockpiled last autumn will require application, but I’ll approach the task a few sacks at a time. I’ll probably need to purchase more of the chips to do the job properly and keep the weeds at bay because this is definitely the year I’m going to make the break with chemical products. I’ll continue to use a landscaper for the spring and fall cleanups, but I’ll still jealously guard the lawn-trimming, eagerly anticipating the first firing-up of my new (and hopefully cleaner, quieter) mulching lawnmower. I simply don’t regard it as a chore.

So just how does my garden grow? (I’m stretching the term because there are no vegetable beds or a compost pile.) Is it analog for something more spiritual, lyrical, and substantial than just eye candy or a retirement time-filler? Emphatically yes. It prospers in most areas, sputters in others, and completely shrivels elsewhere, just like the vagaries of life. It kindles the desire to tend and mend and also to wring my hands. It is also especially resonant with my Jewish genes in that it allows me to feel rooted, as the descendant of a people who have been historically uprooted.

And in the afterglow of Tu B’Shvat, the contemplation of greenery on my little plot helps me move through and beyond the confines of winter.