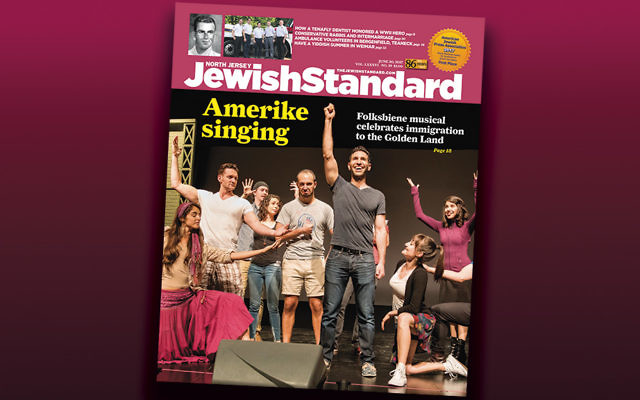 When I wrote a cover story on the National Yiddish Theater Folksbiene’s production of “Amerike” last week, and even when we picked a cover photo that showed much of the cast surrounding a young man raising his fist dramatically in the air, none of us had any idea who that young man was.

We had no idea that anyone other than the Folksbiene’s artistic director, Zalmen Mlotek of Teaneck, had a local connection.

Well, we all know more this week than we did last week.

That young man is David Perlman, who grew up in Closter and whose parents, JoAnne Hassan and Martin Perlman, now live in Alpine.

David Perlman has been a professional actor for years now. His most recent work before “Amerika” was “A Dog Story,” which he’d been involved with for a few years and opened off Broadway at the end of 2016, and among his other credits he’s also played Woof in “Hair.” He traces his start to the Kaplen JCC on the Palisades in Tenafly, and to the director of its acting school, Deborah Roberts. “I was 7 years old when I did ‘You’re a Good Man, Charlie Brown,’” he said; he chose not to mention that he had the production’s lead.

“Amerike” basically is a revue, and some of its performers have more to say, sing, and dance than others do. Mr. Perlman says, sings, and dances a lot; he is at the production’s heart.

Mr. Perlman doesn’t speak Yiddish — perhaps it’s more accurate to say that he didn’t speak Yiddish, because he’s learning it now. He auditioned for “Amerike,” he said, because “I was excited by the idea of doing a show in Yiddish, not just as an actor but even more as a Jew, because it was telling our story in a language that my ancestors spoke.

“I was excited to take on this challenge. With any show you have to learn the lines, and here also the choreography and the music. Here there is the added layer of its being in Yiddish.

There is an emotional component to this work that runs deep, Mr. Perlman said. He sees it in Zalmen Mlotek, “who is so very passionate about it,” and he feels it in himself as well.

“It has affected my Jewish identity,” he said. “I have been brought up Jewish, and I always identified with being Jewish, with Jewish customs and values, but this is giving me an education. I feel closer to our history. It deepens how I feel about being Jewish, about being part of Jewish culture.”

And then there’s the place where “Amerike” is playing, at the Museum of Jewish Heritage in Battery Park City in lowest Manhattan.

“When you step outside, you see the Statue of Liberty,” Mr. Perlman said. “There it is.

“At the beginning of the show, there is a number where we all are coming off the boat, and we see the Statute of Liberty. It is a huge moment.

“So actually coming here, in the present day, and seeing the statue every day — it really does affect us.

“The whole story of ‘Amerike’ is about immigration, so doing it here absolutely makes it feel more real. It’s a different time, but it’s the same place. The place where it happened.”