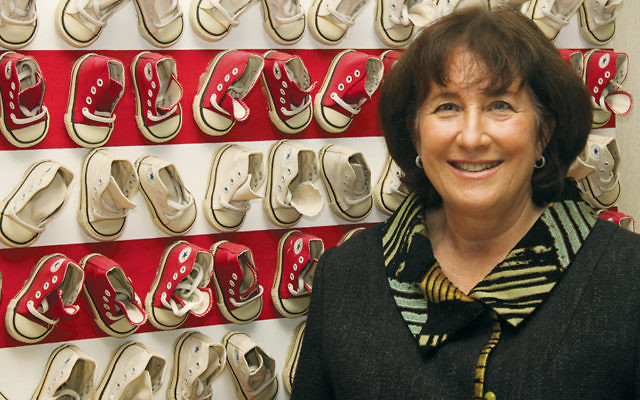 Terri Reicher as she was given the 2016 Jeydel Award. She’s in a conference center; behind her is an American flag made out of baby shoes.

What is a surrogate?

The straightforward definition is someone who is substituting for someone else; generally it is a more skilled, sophisticated, or other privileged person who is acting in the interest of someone weaker or somehow more vulnerable.

In the legal system, a surrogate is a judge who handles mainly estates, wills, trusts, and adoptions — a judge who oversees the disposition of the affairs of the vulnerable.

In New Jersey’s political system, each county has a surrogate, and for some reason — mainly having to do with political history — that surrogate has to run for the office. (Other judges are appointed.)

And that brings us to Terri Reicher of Pompton Lakes, a lawyer and active member of the Jewish community who’s running for surrogate in Passaic County.

Ms. Reicher, who was born on Long Island, moved to Wayne in 1984 and then to Pompton Lakes — just a mile from the Wayne border, she said, so she and her husband, Dr. Oscar Reicher, an orthopedic surgeon, were able to maintain their longtime membership in Shomrei Torah: the Wayne Conservative Congregation. In fact, she has been on the shul’s board, and she’s also been involved in the precursor organization to today’s Jewish Federation of Northern New Jersey.

It is, she said, at least in part Jewish values that have driven her in her work as an advocate for the elderly, work that has taken her logically to this surrogate’s race.

Ms. Reicher, whose undergraduate degree comes from the University of Pennsylvania’s Wharton School — her law degree’s from Vanderbilt University — also was a member of the first class in Seton Hall’s LLM program. An LLM is an advanced law degree; usually it focuses on finance, but part of Seton Hall’s program, which, Ms. Reicher said, is nationally ranked, focuses on health care law. That’s where Ms. Reicher’s credentials come from.

“I have always been interested in end-of-life planning,” she said. “When I was in private practice, I did a lot of trusts and estate planning, and I also became very involved in planning living wills and advanced directives.” Trusts and estate planning deal with the disposition of assets once someone is dead; living wills and advanced directives are meant to guide relatives and health-care workers as a patient nears death. For nearly 20 years, she’s been Chilton Hospital’s bioethics attorney, and she speaks around the state, trying to demystify living wills, and in general helping people get over the emotional hurdles — the fear and trembling — that keep them from thinking about end-of-life issues.

Ms. Reicher is also a volunteer debate moderator. (Who knew that was a thing? But it is.) She trained for the position with the League of Women’s Voters, an organization to which she belongs, and whose debates she has moderated for decades. She is also a mediator, and a longtime member of Pompton Lake’s town council. In that role, she has been active in the redevelopment work that town leaders hope will bring its center back to thriving life.

“I got involved in politics for very nonpolitical reasons,” Ms. Reicher said. That’s why the job as surrogate seems logical; it deals with issues she cares about passionately, and although it’s obtainable only through the political process, it is inherently apolitical.

“The surrogate’s office doesn’t have to be headed by a lawyer, but typically it is,” she said.

“What has struck me more than anything else as I have been campaigning — I was asked to run in March — was that almost no one knows what a surrogate is,” she said. “I have been doing outreach into the community, talking about living wills and advanced directives as a volunteer, for decades. If I were to win, I would have a broader range. My goal will be community outreach.

“It’s a five-year term. If I were to win, my goal is that five years from now, I wouldn’t constantly encounter people who don’t know what a surrogate is.

“My goal isn’t only to talk to seniors. They are receptive. They are willing to talk about wills and trusts and the end of life. But I also want to go into religious institutions and PTAs and PTOs, and talk to the parents, so they understand what the surrogate’s office is, and how a little bit of planning can make their lives so much better.

“Generally, the surrogate is dealing with people who are vulnerable, or in circumstances that are vulnerable.” That’s true not only of the elderly and their survivors, but also of children who are about to be adopted, and their families.

“Jewish values say that those of us lucky enough to have the education and the ability and the know-how to look out and protect those who are vulnerable should do it,” she added.

Ms. Reicher’s work with alternative dispute resolution — mediation — led her to the presidency of the Justice Marie Garibaldi ADR Inn of Court, and this year she was awarded the Richard Jeydel prize for excellence, civility, and professionalism in that work. Both are prestigious.

There is one slight catch to Ms. Reicher’s run. Although the position of surrogate is nonpartisan, the race to attain it is not. Ms. Reicher is running as a Republican. In many years, that would be anomalous but nearly irrelevant, given the apolitical nature of her work; in this extraordinarily rancorous political season, she is finding the designation somewhat uncomfortable. She is, however, grateful to the party for giving her the opportunities that have led to her run for surrogate, and hopes that the necessarily bipartisan work the office demands will smooth over any difficulties should she win her race.

“This should be a nonpartisan position,” Ms. Reicher said. “Those who are in need of the services of a surrogate really have no interest in political affiliation. It is a difficult time in their lives. What they are looking for is someone who has had a lifetime of experience.”