It’s hard to say exactly why it’s so powerful, but by the time Rabbi Joseph Prouser finishes the haftarah on the Monday of Presidents’ Day, after the Torah has been opened, read, scrolled close, and redressed in its velvet and silver, I find myself crying.

And yes, I know that the haftarah normally is not chanted on Mondays, any more than it is on Thursdays, the two mornings during the week when part of the coming Shabbat’s Torah portion is read.

And the haftarah normally comes from one of the books of Prophets; the assignment of haftarah to Torah portion was made centuries ago.

But on Presidents’ Day, when all of us Americans celebrate the two foundational presidents, George Washington and Abraham Lincoln, the father of our country and Father Abraham, whose birthdays coincidentally both were in February, we can see clearly how Jewish values and American ones come together.

The Gettysburg Address, as most of us were taught, is short and direct. There are no wasted words, no flowery thoughts, no bland fluff filling up the page. That’s biblical. Every word counts.

It famously — but, as it turns out, according to modern historians, inaccurately — is said to have been written on a train, and the rhythm of the first paragraph, all propulsive and rhythmic and chugging, sounds as if it could have been influenced by a railroad trip.

The values — liberty, dedication, honoring the dead and remembering them, and the moral imperative that frees us from the demand that we finish our work but not from the requirement that we do our imperfect best to push it toward completion — also sound deeply Jewish.

Many years ago — he’s not sure exactly how many, it’s been that many, but more than a decade ago — Rabbi Prouser decided to translate the address into Hebrew, and to set it to haftarah trop. He chants it once a year, on the Monday of Presidents’ Day weekend, at the morning service at Temple Emanuel of North Jersey in Franklin Lakes.

Why does he do it? “It fits in with a theme that I revisit frequently — the relationship between American history, American government, and the Jewish tradition, and most specifically the Hebrew Bible,” Rabbi Prouser said. And it is Lincoln who “of all our presidents seems to speak the most in biblical cadence and imagery,” he continued. “It’s not that he was the most pious of our presidents — he was not — nor was he the least pious, but both the speech and the place it plays in American history makes it the best choice here.” 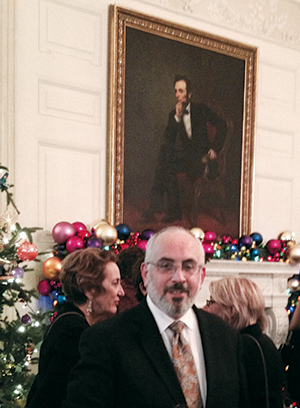 Rabbi Prouser is in the White House for President Obama’s Chanukah party. That’s Lincoln in the portrait behind him.

Lincoln does seem as if he was in the prophetic tradition — he was tall and craggy, famously but compellingly homely. Visually commanding. He was driven by a sense of morality, and of the difference between good and evil, but he was complicated, self-aware, always mindful of other people’s humanity and their mixed motives, as he was of his own. (He was also funny and charming, not traits generally assigned to prophets, but times do change.)

“Lincoln adopted a style that was not like the way in which we moderns, or even our 19th-century predecessors, communicated,” Rabbi Prouser said. “When he used a formulation like ‘Four score and seven years ago,’ he was evoking a biblical style. I think that Lincoln understood that there were complications of biblical proportions that he was trying to manage.

“The final line — ‘the government of the people, by the people, for the people, shall not perish from the earth’ — might have come from the introduction to the Wycliffe Bible. I know that our predecessors were far more biblically literate than we are, but I don’t know if his listeners would have known that phrase.

“What I do know is that he uses those words not just for aesthetic reasons, but also because he was trying to communicate a message. The very final words, ‘shall not perish from the earth,’ was taken from the book of Exodus, about the destruction of Egypt. He was hoping that the United States would come through the suffering of the war more intact than pharaonic Egypt did in the wake of the plagues.”

Every year the major elements of the morning service — the straightforward Shacharit; the readings from great American politicians, political philosophers, diplomats, and patriots; the local dignitaries. This year seven local mayors will be there, along with town councilmembers and other politicians; Rabbi Prouser gives some of the Jewish ones aliyot and distributes other honors to the non-Jews. But no year is exactly the same as any other year, and this year some of the differences stand out.

“This year we are meeting for Presidents’ Day in the wake of an impeachment trial and a bitterly divided country,” Rabbi Prouser said. “This event is kept scrupulously bipartisan and nonpolitical, but I think that bringing together such a bipartisan group of Americans and public leaders itself has special meaning, given the conditions of partisanship and divisiveness in society today.

“We are not going to address the events of the last couple of weeks explicitly, but I think that our coming together is in itself an important act of unity.”

Or, as James Madison put it, “America united with a handful of troops, or without a single soldier, exhibits a more forbidding posture to foreign ambition than America disunited, with a hundred thousand veterans ready for combat,” Rabbi Prouser said.

“That the leaders of seven municipalities and other elected officials are coming together to celebrate Presidents’ Day with the Jewish community is something that we should value and cherish, and we should recognize that it is not typical of Jewish history. It is unique to our time and place.”

We, all of us, have to work to maintain that condition, and to maintain the country of which we are an indivisible part. Rabbi Prouser quotes the Massachusetts abolitionist Wendell Philips, who said, in 1852, “Eternal vigilance is the price of liberty; power is ever stealing from the many to the few. The manna of popular liberty must be gathered each day or it is rotten.…

“Only by continued oversight can the democrat in office be prevented from hardening into a despot; only by un-intermitted agitation can a people be sufficiently awake to principle not to let liberty be smothered in material prosperity.”

So as I sit in the austere sanctuary — it was built as a Dutch Reformed church, so it has the Spartan lines and lack of frills that mark that denomination — looking at the ark that came with the community when it moved up from Paterson — and I listen to Rabbi Prouser sing the powerful words of the Gettysburg Address, somehow at least as powerful in Hebrew, put to the notes of the trope that is to-the-bone familiar to synagogue-going Jews, as I listen to the music of these things that I love and value put together — tears gather and roll.

They’re tears of a complicated mixture of hope and fear and longing and loathing and terror and security.

Thank you, Rabbi Prouser, for allowing them to fall.

What: Reads the Gettysburg Address in Hebrew as part of Presidents’ Day observance at Shacharit services.

Where: At Temple Emanuel of North Jersey, 558 High Mountain Road in Franklin Lakes.

What else: There’s a breakfast after services