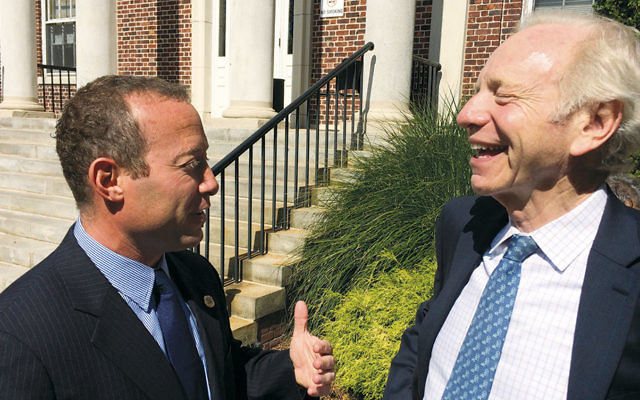 On Wednesday, Josh Gottheimer of Wyckoff, the Democratic candidate from New Jersey’s 5th Congressional District, stood outside Teaneck’s municipal building with Joseph Lieberman, who represented Connecticut in the United States Senate for 24 years, as Senator Lieberman endorsed his run.

Senator Lieberman now is one of three co-chairs of No Labels, a group that believes that compromise is neither a dirty word nor a moral weakness but instead a prerequisite to successful leadership. No Labels, according to its website, wants to work for the election of people “who combine ideological independence and common sense with a willingness to reach across the aisle to get things done.”

As he endorsed Mr. Gottheimer, Senator Lieberman gave him No Label’s Problem Solver Seal of Approval.

“If we could make a candidate to order, it would be Josh Gottheimer,” Mr. Lieberman said, citing Mr. Gottheimer’s fiscal conservatism, general moderation, and bipartisan approach.

Senator Lieberman, who ran for vice president in 2000, was the first Jew ever on a major party’s presidential ticket. He and Al Gore lost that election, but as we all know, it was nail-bitingly close. Since then, and particularly since he retired from the Senate in 2013, he has devoted himself to campaigning for moderation, bipartisanship, and civility in government.

Mr. Gottheimer, a former Microsoft executive and Clinton staffer (that was Bill Clinton — Mr. Gottheimer, who now is 41, was 23 then) is running as a moderate, pledges himself to bipartisanship, and has been willing to buck his own party by vocally opposing last summer’s Iran deal. He is facing Scott Garrett, who has represented the district since 2003. Mr. Garrett, who is deeply conservative and a founding member of the Republican Freedom Caucus, has been a formidable opponent in earlier elections; this year, however, the race is close, and the Democratic Congressional Campaign Committee hopes that the seat might come over to its column.

Both Mr. Gottheimer, who is Jewish, and Senator Lieberman talked about their support for Israel; Mr. Gottheimer presented it as one of the issues closest to his heart, not only for Israel’s sake but because its safety is so important for keeping Americans safe.

Teaneck’s mayor, Mohammed Hameeduddin, also endorsed Mr. Gottheimer. Teaneck is nonpartisan, he said, so it is out of character for him to give such an endorsement, and no doubt it will anger some constituents, but he is doing it nonetheless. “I’m doing it because I’m standing for something,” he said. 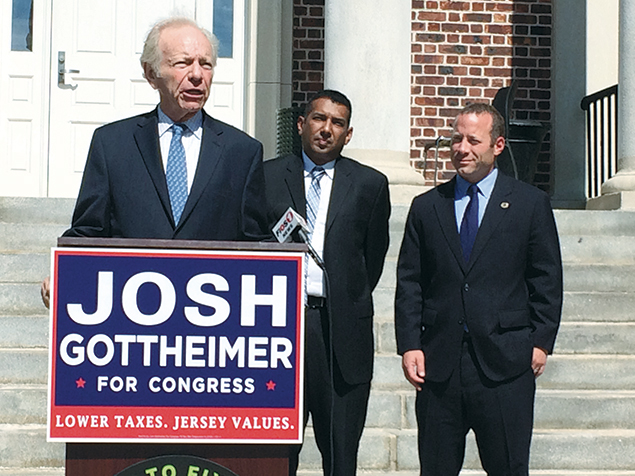 In his Paramus office this week, Mr. Gottheimer talked about why he thinks “It’s important to have someone strong on Israel in the Democratic caucus.”

Israel is one of his signature issues, he said, and one of the issues he cares about most.

It’s a hard time for the relationship between the two countries. “In the past few years, the relationship to Israel has become political and partisan,” he said. “We need someone in the Democratic caucus who is stalwart on Israel. I am a member of Aipac,” the America Israel Public Affairs Committee. “I came out against the Iran deal” — in fact, Mr. Gottheimer wrote a strong column airing his dissatisfaction with the pact in this newspaper — “and I suffered for it.” Some of his backers withdrew their support in response. “When Bernie Sanders tried to put pro-Palestinian language into the Democratic platform, I worked against it.” In the end, that language did not appear in the platform. “I step into areas that make a lot of Democrats uncomfortable, and it has cost me, but I haven’t backed down.

Mr. Gottheimer would like to debate Mr. Garrett, but his opponent has turned down every offer except one, in a small radio station that broadcasts in Warren County and does not reach into Bergen, he said. He contrasts his own moderate views with what he calls Mr. Garrett’s extremism. “I believe in limited, focused government,” he said. “There are things that a government must do — take care of security, schools, infrastructure — and it must do them in a fiscally responsible way. And there are things that I don’t believe that government should do — things like controlling women’s bodies.

“I believe that we don’t have the right to tell other people what to do, as long as it doesn’t hurt anybody else. If it doesn’t, people have the right to be happy,” he said, echoing Thomas Jefferson. “We Jews would be upset if someone told us where we could live or what we could do or who we could marry.” That used to be our historical reality, he said, but not in this country.

“We as a people historically have faced discrimination. I don’t understand how we can allow others to discriminate. People have always wanted to come to America because you can live your dreams here, and have your family here, and be happy here. The government shouldn’t get in the way of that.”

Rabbi Menachem Genack, who leads an Orthodox shul, Shomrei Emunah, in Englewood, is a Democrat and a strong support of Josh Gottheimer’s; he was at the Teaneck ceremony.

Like Mr. Gottheimer, Rabbi Genack stressed the importance of retaining a strong voice for Israel in the Democratic party. “We know that there is an issue with support for Israel in the Democratic caucus, especially from the left,” he said. “We know from the Pew reports that support for Israel is stronger among Republicans and independents than it is among Democrats. That’s why it is particularly important that someone like Josh, one of whose signature issues is support of Israel — and that’s what he told Nancy Pelosi when he met her — get to Congress.” (Nancy Pelosi is the House minority leader.)