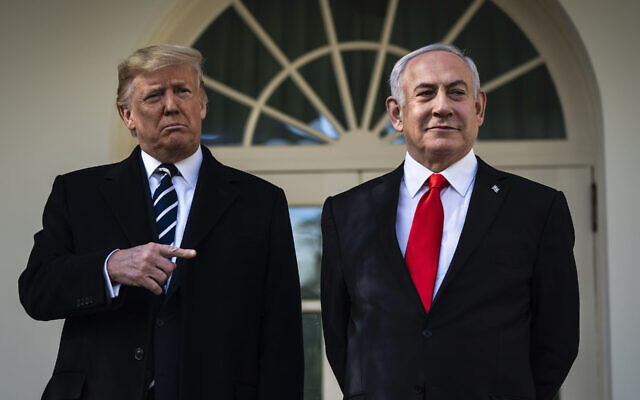 President Donald Trump unveiled his long-awaited Middle East peace plan on Tuesday, and the release event was a doozy.

Israeli Prime Minister Benjamin Netanyahu joined Trump at a news conference and compared it to President Harry Truman’s recognition of the State of Israel in 1948. Netanyahu also snuck in the fact that as part of the plan’s starting framework, he will look to apply Israeli sovereignty over territory that much of the international community considers illegally occupied.

In the most basic sense, the plan is a two-state solution. But the statements from Trump and Netanyahu, along with the text of the plan, which was released in full (181 pages, to be exact) have already triggered a wave of speculation and more than a little confusion.

Here’s a breakdown of the plan’s most basic components and what they mean moving forward.

At its core, the plan proposes a two-state solution, ideally envisioning an autonomous Palestinian state. This line of thinking, endorsed by every U.S. president dating back to Bill Clinton in the 1990s, has lost some support since Trump took office.

However, as U.S. Ambassador David Friedman stressed in a phone call with reporters following the news conference, Israel would retain security control over all the land that would include a Palestinian state. So even though the Palestinians would have their own system of government throughout their state, Israeli forces would still be allowed to patrol and exert their will in the area — as Friedman described it, “from the Jordan River to the Mediterranean Sea.”

That is essentially how Israeli soldiers act now: They are not a constant presence in Palestinian areas, but they move in and out as they please. In that sense, life for Palestinians in the West Bank would not change much.

But another provision of the plan — allowing Palestinians to move freely between the West Bank and Gaza — would be a major change. Palestinians currently cannot move between the two areas without Israeli approval, which is rarely granted. Family members and others would no longer be separated as they are now.

Borders for a Palestinian state

The plan also contains something that past U.S. proposals haven’t included: a specific map that delineates what the potential Israeli and Palestinian state borders would be.

The proposed Palestinian state would consist of most of the West Bank (about 80 percent, according to estimates), the mostly undeveloped territory between Jerusalem and Jordan, and Gaza, the strip of land in the middle of Israel’s western coast.

The plan also leaves the possibility of later adding the so-called “Triangle” — a collection of Arab towns adjacent to the West Bank but part of Israel proper — to a Palestinian state, if both parties agree.

Controversial moves ahead for Israel

Under the plan, controversial parts of the West Bank would become officially recognized Israeli territory.

This includes all of the Israeli “communities” — code word for settlements — that are dotted throughout the potential future Palestinian state, as well as the Jordan Valley, the strategically important swath of land that Israel has largely controlled since the Six-Day War in 1967.

The plan gives the Israelis and Palestinians four years to accept these borders.

Netanyahu announced at Tuesday’s news conference that during that time, Israel will freeze any new settlement construction that would encroach on the Palestinian state outlined in the peace plan.

However, he also said that Israel will look to immediately “apply its laws” to existing settlements and the Jordan Valley, whether or not the Palestinians signal that they will buy into the U.S. proposal.

To some, this may sound like Netanyahu is using the plan’s release as an opportunity to annex that territory right away, as he has long desired.

Netanyahu was careful not to use the word “annex” in his remarks on Tuesday, preferring the “apply its law” usage. That could be his way of making the dramatic move more palatable to the international community, which undoubtedly will criticize the Israeli leader. He is bringing the idea to a Cabinet vote on Sunday.

Moving forward, look for the language over this issue to be debated.

Hamas has to go

Another key part of the plan involves the dismantling of Hamas and Islamic Jihad, two Palestinian groups seen as terrorists by a large part of the international community. Hamas currently governs Gaza with an iron fist, so removing it would significantly change the coastal strip.

Palestinian officials also would have to agree to stop its policy of paying the families of terrorists who attack Israelis.

High-speed rail and other incentives

The plan also aims to create a high-speed rail connection between the West Bank and Gaza, two Palestinian areas that feel physically sequestered because of Israeli security policies.

The “Trump Economic Plan” portion of the document says that the accord has the “potential to facilitate more than $50 billion of investment over ten years.” It doesn’t get into detail about where that would come from, but it likely means from the U.S. and a coalition of Arab states that support the plan.

Slim chances of success — except for Netanyahu

It’s safe to say, at least at this point, that the plan’s chance of success — success meaning that the Palestinians will agree to it — is close to nil.

That’s because the mere release of this plan is a big win for Netanyahu and the mainstream Israeli right. It codifies the full U.S. support of Israel’s eventual annexation of the West Bank settlements and the Jordan Valley, which Israel says is both vital to its security and is part of its rightful ancestral territory.

It also keeps security control of both states — essentially everything from the Jordan River to the Mediterranean, as Friedman put it — under Israel’s purview.

The only thing that might remotely worry Netanyahu is how the proposed settlement freeze will play among Israeli settlers, a demographic he has fiercely courted over his record tenure as prime minister (especially since 2015).

Trump likely hopes that this will give him a boost not just in Israel, where the key aspects of the plan are popular, but also at home, where his impeachment trial rages on. The plan’s unveiling also could be a ploy to distract some Americans’ attention from the trial.

The plot has thickened considerably for Benny Gantz, Netanyahu’s political rival. While both Gantz and Netanyahu have dismissed the idea of governing together under a unity coalition and rotating the prime minister title, it’s notable that Gantz has wholeheartedly endorsed the plan (at least according to Trump). It could signal that some form of reconciliation is on the horizon before yet another Israeli election in March — its third in less than a year.

As for the Palestinians, they are almost certain to object to the map in the plan from the outset. The proposed lack of security control will be seen as a deal breaker, and the Israeli West Bank settlements present all kinds of complications. It would be a Swiss cheese state.

But even if the Palestinians completely reject the plan, could it jump-start a new series of talks between Netanyahu and Palestinian Authority President Mahmoud Abbas? We’ll have to wait and see.