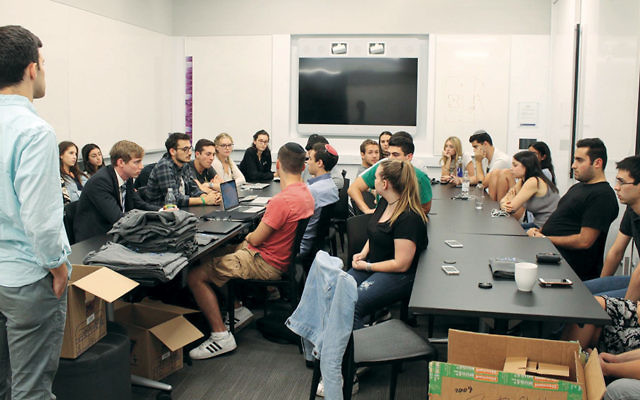 This year’s first meeting of the Tamid group at NYU.

You don’t need an MBA degree to know that a PowerPoint presentation has to grab attention, but the way to do it isn’t with vulgarity — even if it’s particularly well chosen.

In fact, for one Israeli company, the verdict that cuss words don’t fly in the American professional context was delivered by a team of undergraduates.

“There are huge cultural differences between Israel and the States,” Micaela Mangot explained. Ms. Mangot, 20, from Haworth, is a junior at NYU, where she majors in media culture and communications. Her introduction to Israeli-American cultural differences came last year as she participated in Tamid, a national organization that connects American students to Israel through business consulting and stock picking. Ms. Mangot was so inspired by her Tamid experience that this year she has become the director of Tamid’s New York region, which comprises six campus chapters.

All told, Tamid has 35 chapters across the country, involving 1,600 students. That’s according to Yoni Heilman, the executive director of Tamid Group, as the organization calls itself. Twenty more campus chapters are being formed. The organization was started eight years ago by two University of Michigan students who wanted to help Israel but “felt the vast majority of students were not engaged by political discussions or by religious identity,” Mr. Heilman said. “They came up with this idea of an organization that trains the next generation of business leaders and gives them a strong connection to Israel.” 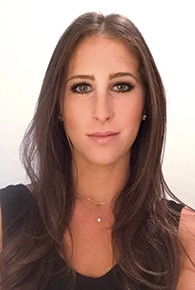 There are four aspects to Tamid’s programming. The first involves standard-issue campus speakers. Ms. Mangot has scheduled a talk at Columbia about Israel-China business relations, and a panel discussion at NYU by young entrepreneurs (including the founder of a company offering removable tattoos that last a year, and another that promises 15 minute delivery time for online bodega orders). Last month the NYU chapter, together with Hillel, co-sponsored a talk by former Israeli Foreign Minister Tzipi Livni, and hosted investor Josh Kushner (yes, the New Jersey-born brother-of-son-in-law-of-Donald–J-Trump Jared.)

Then there are the summer internships in Israel. This is an aspect of Tamid in which Ms. Mangot, who has yet to visit Israel, has not taken part. (She’s trying to decide between a summer internship and a Birthright trip.) The internships began as one student’s initiative. A Tamid member went to Israel, drew up a list of 20 high tech companies, and proceeded to call them in turn, offering them his services as an intern, until he found a taker. Now that initiative-grabbing American works in Tamid’s national office in Washington, D.C., organizing a formal summer internship program.

And then there are the stock-picking clubs and the consulting groups.

Last year, Ms. Mangot led a five-student team that consulted with an Israeli start-up called Zikit, which uses wireless technology to help blind people find their way around in places that have technology in place for it.

“They were figuring out where to infiltrated the American market,” she said. “We had to research about the ADA” — the Americans with Disabilities Act — “and what the guidelines are for the different places in New York City. We researched that and decided the hotel market would be the best place. Through that research, they landed a hotel that now carries their technology.”

As leader of the New York region, Ms. Mangot is expanding a program started at NYU in which Tamid students are paired with former Tamidniks who have graduated.

From his perch in the national office, Mr. Heilman has some favorite stories about Tamid participants. “We’re not just a Jewish organization,” he notes. “We are neither political nor religious in the way we connect students to Israel.”

He tells about a non-Jewish student from Northwestern University who was a summer fellow in Israel last year. The student comes from China. The Israeli company where he interned “realized not only was he a really smart kid, but he had great connections in China. In the middle of the summer, he and the company’s CEO traveled to Beijing on a business trip. At the end of the week, I got a phone call from the CEO. ‘You can’t make him come home to finish the internship,’ the CEO told me. ‘He’s in the middle of setting up a deal with Alibaba’” — China’s largest e-commerce company — “‘and three venture capital firms.’

“The student deferred the next semester because he was busy making deals.

“This is a 20-year-old who is not Jewish and made an indelible connection to Israel and whose career has been launched before he even graduated,” Mr. Heilman said. “We’re seeing more and more stories like that.”