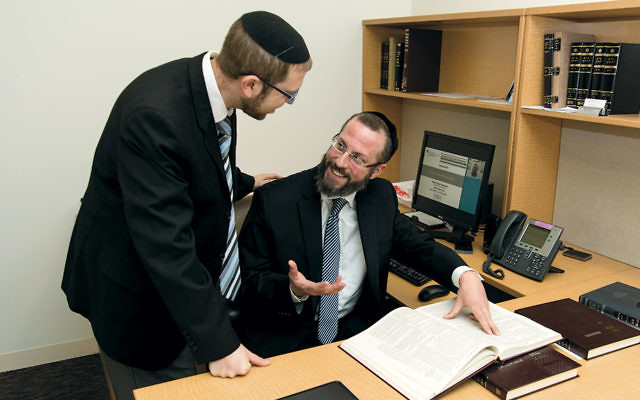 Before an Orthodox man and woman are joined in marriage under the chuppah, each typically has several one-on-one preparation sessions with a teacher of his or her own gender.

The meetings are about the Jewish laws governing the physical relationship — specifically the on-and-off rhythm dictated by the woman’s monthly cycle and her immersion in the mikvah (ritual bath), as well as contraception.

These sessions also offer a golden opportunity to impart guidance in areas ranging from communication and conflict-resolution skills to managing expectations and finances, and recognizing when to seek help for medical, sexual, or emotional problems in the marriage.

In order to better prepare rabbis to tackle a broader spectrum of topics in classes for husbands-to-be and married men, two Yeshiva University organizations, the Center for the Jewish Future and the Rabbi Isaac Elchanan Theological Seminary, recently offered an eight-part continuing education webinar, “Teaching for Healthy Relationships Throughout Marriage,” for alumni and other interested rabbis.

The Center for the Jewish Future already offered training for female premarital mentors, led by Rebbetzin Peshi Neuburger of Bergenfield. A similar course, held in Far Rockaway last June and co-sponsored by the Orthodox Union, featured some of the same presenters who are in the rabbis’ webinar, which began November 1.

Several North Jersey rabbis were among 80 participants from the United States, Canada, the United Kingdom, Australia, New Zealand, and Israel.

Rabbi Gideon Black of Englewood said the comprehensive nature of the course transformed him from someone who had enough training to teach future husbands “into an educator who’s had direct access to seasoned rabbanim and leaders in the field.”

Rabbi Black is the new director of professional recruitment and leadership development for the Orthodox Union’s Jewish Learning Initiative on Campus; before that, he and his wife, Aliza, spent four years as OU-JLIC educators at NYU.

Having taught a few grooms in the past, he wanted to hone his skills for future guidance sessions. “We have an email list of all participants and that has been one of the most enriching parts, to be able to throw out a question and see how other rabbis deal with it and to be able walk through issues jointly,” Rabbi Black said. “I feel more confident and scholarly on every level.”

In Rabbi Black’s estimation, the biggest challenge for young engaged men of any denomination is “making space in their private world for another human being; having to share their life and bedroom with someone else. A lot of people just aren’t prepared to share that space fully.”

He said that the premarital classes afford these men “a personal mentor to address issues from relationship skills to sexuality that they might not be comfortable discussing with family members. And their friends might not have knowledge of how to successfully navigate an active sexual relationship with a partner.”

Though Orthodox Judaism does not condone sex outside of marriage, the course acknowledged that given the broad range of course participants’ constituencies and the influence of a sexually open society, some couples in the Orthodox community might be sexually active before the wedding. Accordingly, one session touched on the potential halachic, psychological, and emotional impact such experience could have on the couple’s relationship.

Rabbi Shmuel Maybruch of Passaic said that many of the young men he teaches before their weddings harbor misconceptions about both the halachic and the intimate aspects of marriage.

“Correcting misinformation is one of our most worthwhile jobs as teachers,” said Rabbi Maybruch, who is a licensed social worker, psychotherapist, relationship coach, and faculty member in YU’s Stone Beit Midrash Program. He designed the webinar with Rabbi Naphtali Lavenda, the director of online rabbinic programming at YU’s Center for the Jewish Future.

Rabbi Maybruch explained that the webinar arose from a need to provide “a more unified body of knowledge” to teachers of brides and grooms. “Usually people offer their own courses and there is no regulation or certification, but at least we can empower them to teach a notch higher,” he said, adding that students who finished the course were offered optional certification.

Rabbi Maybruch said that he wants rabbis to be able to impart a set of relationship-building tools to their premarital students. He cited findings from the 75-year Harvard Study of Adult Development, which indicate that the single most important predictor of happiness and health is the quality of a person’s interpersonal relationships.

“That’s really phenomenal, and corroborates a lot of the ideas we have in Judaism,” Rabbi Maybruch said. “Given the importance of the husband-and-wife relationship, we’d be remiss to focus only on the legal perspectives. We must help them harness research-based suggestions for improving their lives through their marriage relationship.”

Rabbi Michael Bashist of Clifton, senior-grade dean at the Frisch School of Paramus, has been giving marriage-prep classes to grooms since his first students began getting married around eight years ago.

“The topics are very personal, and having a relationship with a student for many years is invaluable, especially when discussing intimate aspects of life,” he said.

While most webinar participants were community pulpit rabbis or rabbis working with grooms of college age and older, Frisch’s principal, Rabbi Eli Ciner, considered Rabbi Bashist’s participation as part of teacher development and continuing education. “Our greatest goal and privilege is to develop life-long relationships with our students, and to support them in those special moments well after high school is completed,” Rabbi Bashist said.

The webinar gave Rabbi Bashist access to rabbis, marriage counselors, psychologists, and medical experts with expertise in a range of areas including Jewish law, marital harmony, and sexual health. “This course created a holistic approach so we can best prepare our young men and women for the new stage of life which they will be entering,” he said.

One of the most marked shifts for religious young couples is in the sexual realm. “The entire view of sexuality changes from one replete with laws designed for restraint and distance, to one where this same area of life is not merely permissible but is a positive mitzvah,” Rabbi Bashist said. “Because the transition is so quick, it can sometimes present a challenge for young couples. We must therefore educate and prepare them in making that transition in a healthy, calm, and joyful manner.

“By teaching and discussing the Torah sources and perspectives that focus on these areas that our young men and women have often not been exposed to previously, helps make that transition easier. They learn that there is no area of life that isn’t touched by Judaism, including healthy ways to approach sexuality.”

“We have been supporting our rabbis in numerous ways for years, and there is consistent interest in nuanced instruction from trained professionals,” Rabbi Lavenda said. “The strong participation from rabbis worldwide also demonstrates this is a sensitive topic on which rabbis are seeking guidance, to really help the couple create a strong foundation for their marriage, and we look forward to providing the rabbis with additional continuing education courses, in both this and other areas of interest.”