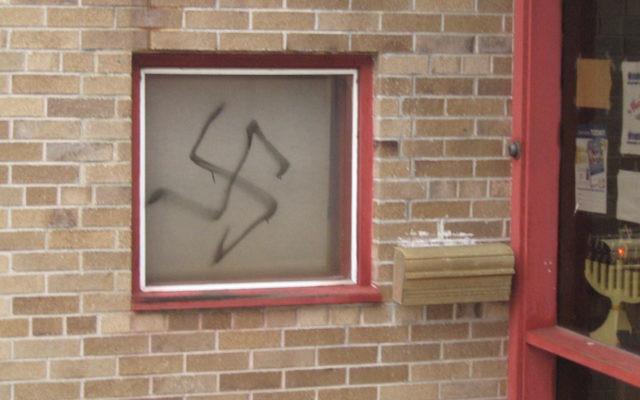 Prosecutors say that Aakash Dalal directed this vandalism at Temple Beth El in Hackensack while he was in New Hampshire.

Were the Jews of Bergen County terrorized when five synagogues were vandalized or attacked in December 2011 and January 2012?

That has become a central question as the trial of Aakash Dalal began in Hackensack last week.

Mr. Dalal, 24, faces 20 counts in connection to the attacks on synagogues, among them terrorism and bias intimidation. Prosecutors allege that he was the mastermind in the attacks, three of which occurred while he was in New Hampshire, campaigning for Republican presidential candidate Ron Paul. Mr. Dalal’s alleged co-conspirator, Anthony Graziano, was convicted in May for carrying them out. He is awaiting sentencing.

In an opening statement, as the Bergen Record reported, Assistant Prosecutor Brian Sinclair presented a picture of Mr. Dalal, gleaned from text messages and a search of his computer, as an avowed and proud anti-Semite.

“I know I’m going to be fuhrer one day,” Mr. Sinclair quoted from an internet message Mr. Dalal allegedly sent to Mr. Graziano.

“These chats are damning,” Mr. Sinclair told the jury. “Data doesn’t lie. It is what it says it is.”

The words “Jews did 9/11,” spray painted on a ramp at Temple Beth Israel in Maywood, were the direct handiwork of Mr. Dalal, Mr. Sinclair said.

The prosecution summoned several witnesses to testify how the attacks had frightened them.

Among them were Christine O’Donnell, a member of Temple Beth Israel who was the first to discover the graffitti there; Mark Zettler, the president of Temple Beth El in Hackensack, and Samuel Lichter, who was vice president of Congregation K’hal Adath Jeshurun in Paramus.

They spoke of discovering the attacks on their synagogues.

When Ms. O’Donnell saw the grafitti, “I was shocked and nauseated,” she testified. “It was a punch to the gut.”

They also told of their reaction as the attacks on the synagogues continued and escalated.

Mr. Lichter said that when he heard about the firebombing of Congregation Beth El in Rutherford, barely a week after discovering a failed arson attempt at his synagogue, he felt “this person really meant business.”

The defense attorneys sought to convince the jury that there was reasonable doubt whether Mr. Dalal had intended his directive to Mr. Graziano to be taken seriously; whether the electronic evidence the prosecution was presenting could be trusted; and whether the synagogue leaders were, in fact, terrorized.

“There’s no witness to these conversations,” defense attorney Joseph Corozzo said in his opening statement, referring to text messages exchanged between Mr. Dalal and Mr. Graziano. “There’s no tape recording.”

The messages were retrieved from “corrupted computer space” on Mr. Graziano’s computer, the defense attorney said, in an “incredible lab that belongs to the prosecutor’s office.” They’re “not credible evidence,” Mr. Corozzo said, implying that the prosecution forged them.

Mr. Corozzo also tried to convince the jury the attacks were not terrorism, which New Jersey law defines to mean conveying fear to five or more people.

“It’s not done anonymously,” Mr. Corozzo said of terrorism. “It’s done by someone who wants to get his purpose out there. A terrorist’s goal is to take credit for their crime.”

After the synagogue leaders testified, he grilled them about their security practices.

“You were not concerned with the desires of the Hebrew school parents for three months,” Mr. Corozzo said to Ms. O’Donnell, after she said that the synagogue did not install security cameras until two or three months after the vandalism

Mr. Zettler was similarly questioned, this time by defense attorney Brian Neary, about the Homeland Security grant the synagogue applied for and received.

“What are you trying to imply, sir?” Mr. Zettler asked Mr. Neary at one point.

Mr. Neary denied implying anything. But judging from the Record’s report of the cross-examination, the defense seemed to imply that the synagogue was opportunistic in its response to the attack.

A more detailed, though unhinged, theory of the prosecution of Mr. Dalal as opportunistic was elaborated on in a series of comments left on the Record’s website. Replete with anti-Semitic stereotypes and misunderstandings of the federal security grants, the commenter, posting under the name Cindy Crawford, linked the prosecution to a plot by Jewish supremacists to take taxpayer money.

Urging readers to attend the trial, “Ms. Crawford” also posted — in a comment reproduced here with original spelling and grammar intact — “Arson Statues are codfied to promote insurance industry which is said to be started by Jews.”