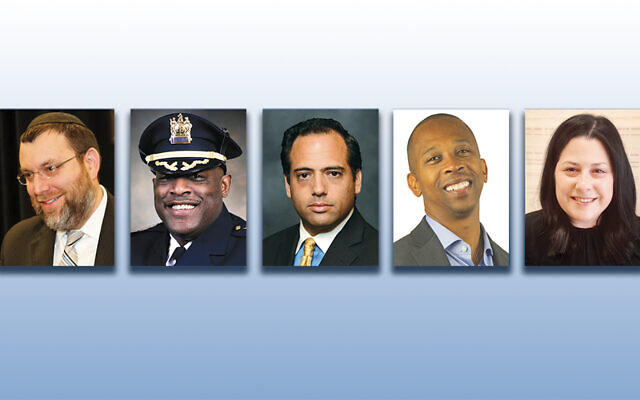 And that’s what an upcoming program sponsored by the Israel Engagement Committee of Englewood’s Ahavath Torah will tackle on February 9, said Irene Gottesman, who co-chairs the committee with Lynn Karpo-Lantz and Aviva Shuman Banner. (See box.)

Mr. Cohen believes the upcoming meeting, called “Stand Up/Speak Out: Standing Up to Anti-Semitism and Hate” and advertised as a “community briefing,” is a necessary follow-up to such big events as the recent No Hate, No Fear march across the Brooklyn Bridge. “I worked in the New York State legislature for a decade and I’ve seen how things happen,” he said. “Creating legislation or government action requires a lot of work. When you have the cumulative effect of different pressure points, it gets things done.”

The march, he said, should not be a stand-alone event, but must be done in conjunction “with all other pieces of the puzzle, pieces of activism.” Indeed, he said, part of the upcoming forum will be used to suggest “continued actions that can be taken.”

Ahavath Torah has demonstrated its commitment to community engagement in several ways, Mr. Cohen said. He noted, for example, that in preparation for this year’s Martin Luther King Day observance at the town’s Ebenezer Baptist Church, members of the synagogue “marched together to the city hall staging area and then with the larger delegation toward the church, to demonstrate a specific, delineated Jewish communal involvement.

“We want unity,” Mr. Cohen said. “We have to fight hate together. Legislators saw the people of Ahavath Torah march toward the rest of the delegation. They have to regularly see that kind of activism.”

Ms. Gottesman noted that with a rise in hate crimes in the region, “it’s critical that the community hear from experts in terms of what’s going on — different perspectives than they usually hear — and that they hear what is being done and what role they can play.”

She explained that the Israel Engagement Committee, which is sponsoring the event, has included anti-Semitism as a focus of its activities, and now feels the need to address hate as well. “It was an evolution,” she said. “We started by thinking about how to point out that anti-Zionism is racism, and that evolved into addressing anti-Semitism, and then into this.

“We feel that the community needs an education and is misinformed about many things going on now,” she continued. “We’d like to see a little more clarification on legislation, like bail reform. People don’t really understand it — what is right and what is wrong with it. What kinds of role do religious institutions need to play in community relations? What kinds of grassroots efforts should there be to improve things?” She’d also like guidance on issues such as how to respond to racial slurs. “We hope that Sheriff Cureton will explain how we can be helpful in his efforts to have better law enforcement, and we want to know how things are as opposed to what we think they are.”

Mr. Cohen noted that Sheriff Cureton, the immediate past president of the Bergen County chapter of the NAACP, “was a special person in the Jewish community even before he became sheriff,” citing Mr. Cureton’s appearance before the Mahwah Town Council, speaking on behalf of the Jewish community during an outbreak of anti-Semitism there.

“Many African Americans are going to bat for Jews and are sticking their necks out for us,” Ms. Gottesman said. “We have to stick our necks out for others as well. We have to do things together, as one community. Our shul has to identify as part of the community.

“We need to connect.”

It’s important to have such a meeting in a synagogue, “because a lot of what we do to build bridges is faith-based,” she added.

Surveying members of the panel, Mr. Cohen pointed to Assemblyman Mosley as a builder of bridges, noting that in 2018 the legislator received AIPAC’s Ralph Bunche Award, recognizing, according to AIPAC, “African American activists who have demonstrated significant leadership in advancing the U.S.-Israel relationship as well as critical issues affecting our communities here at home.”

Ms. Gottesman said the synagogue was fortunate to get Israeli-American journalist, author, and media critic Leil Leibovitz as moderator for the evening. “The fact that it’s in a synagogue makes it appealing to him, because this is where it has to begin,” she said. “He feels it has to be depoliticized.”

Panelist Sarri Singer, an advocate for victims of terror, will address the issue of healing “for anyone who has been a victim of trauma, not only Jews,” Ms. Gottesman said. After recovering from injuries sustained during a bus bombing in Israel, Ms. Singer moved back to the United States and created Strength to Strength, a nonprofit organization that brings together victims of terror and assists with their long-term psychological care.

All of Bergen County’s minority communities have been invited to the February 9 program, “and we hope the larger Bergen County community will come,” Ms. Gottesman said. “We’ll find out that we have more in common, that we’re very much the same.”

“Whenever you host a forum, people will look at the turnout and equate that with how concerned the relevant community is,” Mr. Cohen said. “It’s important to see us come out en masse, to see the level of our concern. We have a lot of questions and they can be answered by professionals, so we have a clear understanding of what is happening and the needs of those on the front lines of combatting it.”

Mr. Cohen said the evening will include an exhibit created jointly by the Simon Wiesenthal Center and UNESCO. “It’s incredibly interesting, and we’ve used it in state capitals and on college campuses,” he said. While the average person does not see UNESCO and the State of Israel as natural partners, the fact that the organization has partnered with the Wiesenthal Center “to co-sponsor an exhibit to discuss the Jewish people’s connection to the Land of Israel” renders the exhibit particularly valuable. “On campus, they can’t say this is just a Jewish perspective,” Mr. Cohen said. “Having UNESCO sponsorship makes it ‘kosher.’ It’s seen as an objective piece on the history of Israel and can be helpful in debunking the tropes that are constantly thrown out. The UNESCO component allows for a different kind of distribution and effect.”

What: Will sponsor a community briefing, “Stand Up/Speak Out: Standing up to Anti-Semitism and Hate”

When: On Sunday, February 9. Doors will open at 7 p.m. for the Israel exhibition. The program will begin at 7:30 p.m.