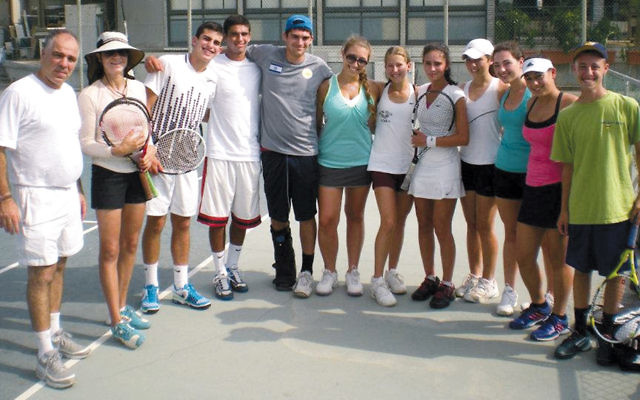 Danielle Baron, sixth from right, with her 2012 Israel Sports Exchange cohort and their counselors and instructors. ISE founder Larry Seidman is on the far left.

Larry Seidman of Wayne stepped up to the plate, so to speak, making all the arrangements.

The two men, who quickly became close friends, saw the positive impact of this simple home hospitality. They decided to establish the Israeli Sports Exchange, a program that has evolved over the years to focus almost exclusively on tennis.

Birthright, a free 10-day heritage trip to Israel underwritten mainly by American philanthropists and the Israeli government, has brought about 40,000 young people to Israel every year since 1999.

ISE, underwritten by an endowment set up by Mr. Seidman and a few friends, brings six to eight serious players to Israel each summer after their junior or senior year of high school for 20 days of tennis, touring, and friendship-forming.

“I love sports and I love Israel, so I concentrate on both,” Mr. Seidman said. “I think it’s important to have kids go to Israel and meet kids their own age and become friends. At the end of the three weeks, the sport has become secondary to the relationships.”

Nevertheless, applicants have to prove their mettle. Local teenagers participate in tryouts on the last Sunday in January to gauge their level, while out-of-towners are required to provide two references from the tennis world.

“A lot of these kids would never have gone to Israel otherwise, because they’d have to give up a whole summer of training,” Mr. Seidman said.

He and Mr. Higger, who has coached world-ranked Israeli tennis players Gillad Blum, Harel Levy, and Shahar Peer, volunteer their time to the program. 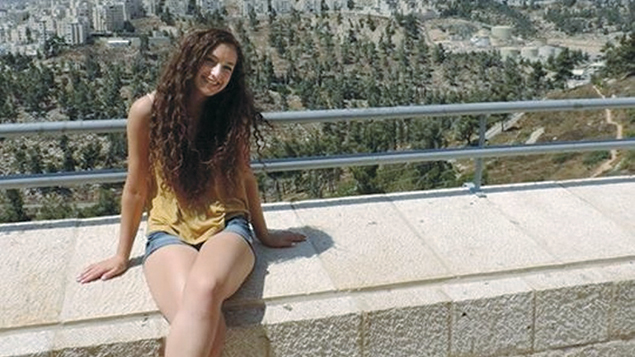 Haley Rosenwald during her Israel Sports Exchange trip in 2015.

“The level of tennis instruction, facilities and instructors were top notch, and Haley learned so much even though she started as a very good player,” Ms. Rosenwald said. “She just loved Or, the daughter of the first family she stayed with, and they became really close. She really felt like she was living in Israel, not like a tourist.”

Ms. Rosenwald and her husband, Marc, met on a teen tour to Israel in 1979, so they didn’t hesitate about sending Haley to Israel for the summer.

“As parents we felt confident and comfortable because Larry and his team took care of all the kids as if they were his own,” she said. “He wants to show the kids that Israel isn’t just a word in the newspaper. He wants them to understand and connect to Israel and its people.”

Haley, a Glen Rock High School graduate now in a six-year doctoral program in physical therapy at Ithaca College, went to the Israel Open tennis tournament in Ra’anana and played tennis every day, in addition to activities such as a three-day rafting trip. “She learned, explored, and connected,” her mother said.

Danielle Baron of Wayne, now a 21-year-old senior at the University of Hartford, participated in ISE during the summer of 2012.

“There were many takeaways from the program, and it has lasted me far more than just 20 days,” she said. “I made so many connections with both the Israelis and Americans who were on my trip. This was my first time going to Israel, and I had the opportunity to fall in love with the country. I also learned a lot about different cultures and places throughout my trip. I even had the opportunity to visit some of my friends and family while I was in Israel.”

As a result of those three weeks, she achieved her dream of making the varsity tennis team at Wayne Hills High School. “I would not have been able to reach my goal without the confidence and phenomenal tennis training that I received while in Israel,” she said. “Now I am able to look back not only on a fabulous experience but also how much my love for tennis and Israel have grown over the years.”

Her mother, Susan, said she hoped that Danielle would have the trip of a lifetime and come home “filled with wonderful memories of Israel; its beautiful Jewish culture, history, people, and land. The trip surpassed those expectations.

“Danielle had so many amazing experiences. Each day was packed with adventure and tennis. She formed bonds with Israelis her own age and lived in their homes.”

The following year, the Barons returned the favor when some of Danielle’s host peers came to America. That’s the “exchange” part of the program. “Each North American participant and their family will be asked to commit to hosting Israeli athletes who come to the United States to train or compete,” the ISE website explains.

“Sometimes we arrange for Israeli kids to go to tennis camps here,” Mr. Seidman said. “But it’s not only tennis; it’s basketball, volleyball, whatever. We’ve even hosted Israeli ballerinas coming to study for the summer. The sport is irrelevant.”

For more information about Israel Sports Exchange, go to www.israeli-sports-exchange.com, email Mr. Seidman at lbseidman@msn.com, or call him at (973)-952-0405.