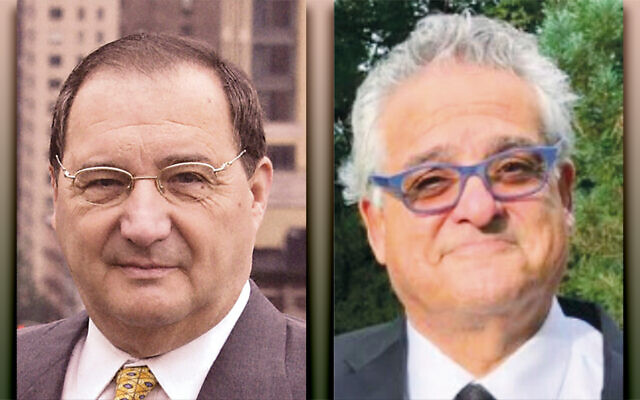 Abraham Foxman of Bergen County is an optimist, he always says; his life, which began in just-pre-Holocaust Poland, was saved by his babysitter, who brought him up with love; his parents both survived and the family was reunited, and he went on to a 50-year career at the Anti-Defamation League, most of it as its head.

But Mr. Foxman’s optimism is tempered with realism, which results in an uneasy stew just now, as he talks about the attack in Monsey. A man with a blade that some people have called a machete burst into a Chanukah party; he did not manage to kill anyone, despite his best efforts, but grievously wounded two men, more lightly wounded other people, terrorized even more, and later was caught covered in their blood. Technology that reads license plates caught up with him. The attacker’s motive is unclear, but it seems entirely evident that whatever it was, it was fueled by hate.

“It’s important to try to put this into perspective,” Mr. Foxman said.

“And this virus — anti-Semitism — has served so many masters,” Mr. Foxman continued. “It is dependent on religious and economic and political and social intolerance, and all those elements are more out there, more prevalent than they have been for a long long time. So we are seeing this now.

“The virus was always there, but it was latent. It had been contained by a firewall, but over the last several years we have lost it.”

Media coverage of anti-Semitism can make it feel worse, Mr. Foxman said; there’s always a tension between how much or how little to say about flare-ups of the virus. “I have been fighting this disease for a long time,” he said. “People didn’t pay much attention. We would issue our reports, our analysis, and people would say it was serious, but it wasn’t covered seriously in the media. I venture to say that if you look at the record of anti-Semitic outbreaks in the tristate area during the festivals of Chanukah and Christmas, you would find spikes in anti-Semitic outbreaks during Jewish festivals, because we are more in the media then than at other times. It particularly spikes around Christmas and Easter because it triggers the age-old myth about deicide.

“We always struggle between the shveig and the shrei — the need to be silent and the need to shriek,” he said. “Should we be quiet, and then it will go away? Or should we make noise, and encourage copycats?

“This is an old reality, taking on the garb of our times.”

So once we acknowledge that there is a problem — there have been acts of anti-Semitism, really nasty, even stomach-turning although non-lethal ones, reported in the city and around the region every single day of Chanukah, as reliable as the lighting of each new candle every night — what do we do?

“We need to take it seriously, not just in between incidents but day to day. And we have to look at it both internally and externally.

“Internally, Jewish institutions need to re-examine and set priorities about security, and externally we need to demand more than words from the authorities. We need to demand that law enforcement on all levels take this virus seriously. I do think that they have been taking it seriously — but after the fact.

“I remember 9/11. Two weeks after 9/11, our law enforcement, especially on the federal level, came up with all the answers about who did it and how they did it. But if they were so good, where were they before? Doing it before is tough, but it needs to be given priority.

“Law enforcement is good at solving crimes when there is an emergency, but this needs to be given priority. It is a 24 by seven responsibility, until we turn the corner. Until the perpetrators begin to understand that there are consequences, that you pay a price for it.

“Today, there are very few consequences for being a bigot. If the price for acting out a hate crime is higher, I think it would affect people. Maybe not the crazies, but everyone else.

“And even the crazies — yes, there are people who are mentally ill, but why are they mentally ill about us?

“We have been the subject and the object of all prejudice throughout the ages, and this needs to be taken very seriously. And the side effects will be good for society in general, because we Jews are the canary in the coal mine. If you deal with the hate directed against Jews, you will deal with hate against others simultaneously, and it will have an impact.”

One aspect of our environment that has changed radically in the last three years is that the president of the United States is someone who tweets out insults from the White House and bellows rages at his rallies. Is he the cause of this spate of hatred?

Yes and no, Mr. Foxman said; he’s a cause, but even more than that he’s a symptom. “Donald Trump is part of the environment,” he said. “He has given it license. He has empowered it.” But he did not create it; he merely (merely?) unleashed it.

Mr. Foxman is worried by “another element that I don’t know what to do with,” he said.

“I am troubled that in many of these incidents there are too many bystanders, that nobody stood up. Nobody intervened.” That was not the case in Monsey — many of the people at the Chanukah party fought back, and that well might have kept the casualties limited and the fatalities at zero — but often it is, as onlookers quite understandably freeze when they see machetes or guns or assault rifles.

“Police officers and first responders are wonderful, they are extraordinary, but intervening — that’s their job,” Mr. Foxman said. “That is what they dedicated their lives to doing. It troubles me that when you see videos of assaults in the subway, you see that nobody budges. Nobody says anything. Nobody does anything.”

There must be consequences. “Everybody was so shocked at what happened in Jersey City, and yet the lady on the board of education who was so hideous in her anti-Semitism? She is still sitting in her job.”

He was talking about Joan Terrell-Paige, whose tweets were crudely and shockingly anti-Semitic; both New Jersey’s governor, Phil Murphy, and Jersey City’s mayor, Steve Fulop, demanded her resignation, but she has not resigned.

“That message troubles me,” Mr. Foxman said. “I would like to see citizens responding. I would like to see them marching in the streets against hate. I don’t see it. I don’t see it. I think that would make a difference, because if there would be a march tomorrow in Jersey City or in Monsey or wherever, by the united community standing against hate, it would be a message to the next perpetrator that he is acting against everybody. Not just the Jewish community, or the chasidic community, or the community of the Church of Christ in Texas.” (A gunman killed two members of that church, in White Settlement, Texas, on Sunday, the day after the Chanukah attack; he was shot and killed by armed church members.)

“I don’t see that,” he continued. “I do see politicians standing up, and that is good, but by itself it is not sufficient.

“But I am hopeful. I can talk to you today because 70 years ago someone had the courage to save me. We have to figure out how to inspire good people not to be bystanders. I am positive that we can do that, but it takes time.”

There’s one more thing, he added. Education. “We can’t ignore the fact that it takes much less time to create a bigot than to uncreate one, but we have to figure out how to do that.”

Steve Gold is the co-president of the Jewish Federation and Foundation of Rockland County; he is one of the planners of the meeting the federation held on Monday night; speakers included New York’s senior senator, Chuck Schumer.

Mr. Gold is worried about the effect that something very new — social media — has on something disturbing old — anti-Semitism. “There’s so much hate going around,” he said. “Everyone should just respond with the hashtags StoptheHate or ThisIsHate, and then also shut it down.

“What is happening in Rockland and elsewhere is that Facebook groups hide behind the First Amendment. They can say whatever they want. If I want to publish an editorial in your newspaper, you will check me out first, but social media doesn’t do that. There are no gatekeepers.

“How do you bring both sides together?

“And this is getting worse. There have been 13 attacks in New York in December; that doesn’t include Jersey City. And then there have been attacks every night since Chanukah started. This is just unbelievable.

“In Rockland, it’s just getting worse. The rhetoric is getting much worse. People say they don’t want chasidim in their neighborhoods. When I was growing up in Sullivan County, when black families wanted to move in, it was ohmygod what are we going to do? And then it was fine. Everything was fine. It all worked out.

“And the towns don’t help. Whenever a chasidic group wants to buy something, the town buys it first, so they can’t. It’s crazy. You need Einstein to come in and figure it out — and I think that even with his genius, he couldn’t figure it out.”

He’s worried that the attacks are becoming so frequent that unless they are particularly outrageous — unless, say, someone barges into a Chanukah party and starts hacking at people with a machete — no one notices. “It’s like it’s just another one,” he said. “And then you wonder what in the world is going on.”