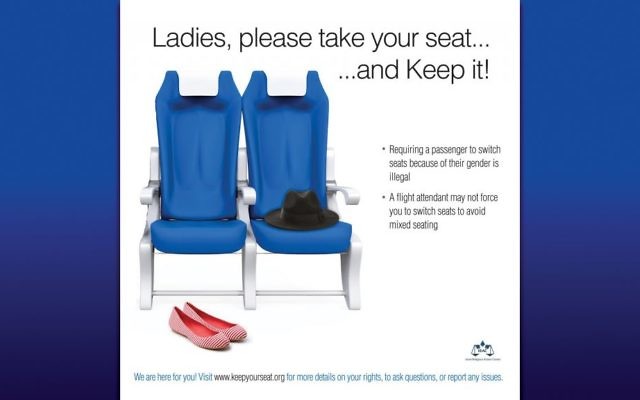 Orthodox Jewish men’s efforts to avoid having to sit next to women on an airplane have become a First Amendment issue. But the battle isn’t over the religious freedom clause, but rather a different matter that has been much litigated in recent years: Can public agencies bar all non-commercial advertisements on matters of public interest in the advertising spaces they rent out?

This legal issue has played out in controversies by pro-BDS organizations seeking to advertise anti-Israel positions on buses and subway platforms.

Now the issue has come to the Port Authority of New York and New Jersey.

The agency has rejected a proposed billboard at its airports that would tell women flying to Israel that they do not have to switch seats to accommodate charedi passengers.

However, the Port Authority now says it is reviewing its ad guidelines, “making it likely that the seating ad will eventually appear at a local airport,” according to the New York Times, which reported on the rejection of the ad, which happened last month.

Sponsored by the Israel Religious Action Center, the public and legal advocacy arm of the Reform movement in Israel, the ad reads: “Ladies, please take your seat … and keep it.” It explains that requiring a person to switch seats because of gender is illegal and that flight attendants are not allowed to ask a passenger to switch seats to enable segregation by gender.

The center, known as IRAC, planned to hang the billboard in the El Al airlines passenger waiting area at Newark Liberty International Airport in New Jersey.

The Port Authority’s guidelines for ads in airports, subways, and bus stations say that the ads must be for a product or a service and cannot offer a religious or political message. Allowances are sometimes made for public service announcements, though that is left to the discretion of the Port Authority.

IRAC has hired a civil rights lawyer to convince the Port Authority to allow the billboards to hang, and the lawyer already has provided some legal precedents in favor of it, according to the Times.

More women have been complaining that they have been asked to switch seats in the last few years. Those requests are driven by the feeling among male charedim that it is immodest for them to sit next to women. In December, an 81-year-old Holocaust survivor sued El Al after she was asked to change seats on a flight from Newark Liberty to Tel Aviv.