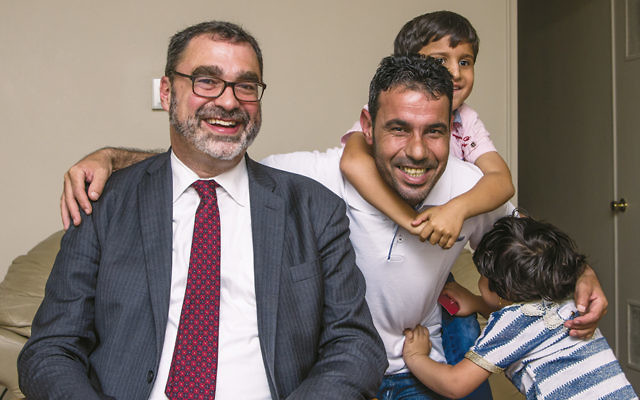 The head of the refugee resettlement organization formerly known as the Hebrew Immigrant Aid Society is a fan of Antonio Guterres, the Portuguese diplomat who has been tapped as the next secretary general of the United Nations.

And Mr. Guterres, who was the United Nation’s high commissioner for refugees, is in turn a fan of HIAS, according to Mark Hetfield, its president.

Mr. Hetfield will be speaking after services next Friday night at the United Synagogue of Hoboken.

HIAS dates back 135 years, to the beginning of the mass immigration of Russian Jews to America in 1881. That makes it the oldest refugee resettlement organization in the world.

While HIAS no longer has Hebrew (or any other word) in its name, it is still strongly based in the Jewish community. That’s what frequently sends Mr. Hetfield and other HIAS representatives to synagogues to talk.

“Overwhelmingly, the Jewish community tends to be very supportive of refugees,” he said.

When anti-refugee sentiment rose last year, fostered by Republican presidential contender Donald Trump after the terrorist attacks in Paris in November, HIAS “thought it was important to step up and speak out,” Mr. Hetfield said. The organization produced a letter, signed by 1,287 rabbis, supporting continued resettlement of refugees in America. Two hundred and twelve synagogues have signed on to a Welcome Campaign organized by HIAS to show their support for refugees. (Those in northern New Jersey include the United Synagogue of Hoboken, Barnert Temple in Franklin Lakes, Temple Beth El in Jersey City, and Shomrei Torah in Wayne.)

“Of course, it’s not unanimous,” Mr. Hetfield said of Jewish communal support for refugees. “There are people who are concerned about bringing in populations they feel are not favorably disposed toward Israel or toward Jews.” He said that the experience of resettling refugees through Jewish family service agencies “have been only positive. There’s no better antidote toward anti-Semitism than exposing people to Jews who are helping them and doing good things for their families.”

HIAS operates around the world. It tries to help refugees in their “country of first asylum,” and to prevent them from being deported back to the countries they fled. HIAS works in places including Ukraine, Panama, Chad, and Kenya. It works with asylum seekers in Israel, and it has just opened an office in Greece, on the Isle of Lesbos, where it works with “a lot of Syrians, Afghans, and anybody who tries to get to Europe by boat and ends up on Lesbos. We try to ensure they apply for asylum in Europe and are not returned to Turkey.”

Overall, HIAS has a staff of about 500 and a budget of around $46 million.

The United Nations estimates that in 2015, 1.8 million people were displaced from their home countries; the U.S. refugee quota is a tiny fraction of that number. Recently, “refugee quotas have been going up — both in general and for Syrians — but not as vastly as the needs have been going up,” Mr. Hetfield said. “For many years, the U.S. was accepting 70,000 a year.

“Part of why President Obama has not increased it further is because the security procedures cause the process to take a fairly long time. It takes 18 to 24 months to get through that process. It’s difficult to rescue people when you’re dealing with that kind of timeline.

“Security is always an issue because they come from countries known for human rights violations and bad relations with the U.S.

What are the security procedures the U.S. government takes as it vets potential refugees?

“There are multiple face-to-face interviews with an official from the DHS,” Mr. Hetfield said. “Those interviews last hours, particularly for the Syrians.

“They take their fingerprints. They’re not only checked against Interpol and worldwide databases, but kept on file. They do a number of name and identity checks, running the information by a number of law enforcement and security agencies.

“They don’t give the refugees the benefit of the doubt. One of the frustrating things for the refugees is they’re not told why they’re not allowed in. It’s difficult to address any evidence being used against them,” he said.

Mr. Hetfield said he is frustrated at the attention paid to refugees, who are less than a tenth of each year’s immigration to the United States.

“Look at the people who carried out the attacks in Paris last year that started this hysteria,” he said. “None were perpetrated by refugees. All were radicalized Europeans who could come to the U.S. without a visa. It’s misdirected energy.

“The refugees are just an easy target,” he said.

Who: Mark Hetfield, CEO of HIAS