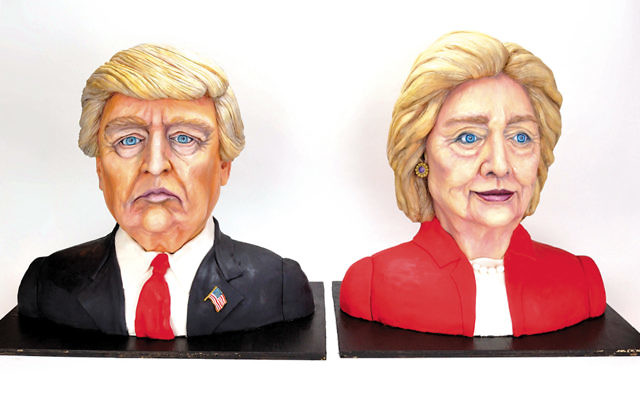 Melissa Alt’s bust cakes of Donald Trump and Hillary Clinton are both winners.

If the presidential campaign left you wondering what is really inside the candidates’ heads, Melissa Alt can tell you: A ball of aluminum foil.

Ms. Alt knows this because she put the foil there herself when she constructed edible busts of Donald Trump and Hillary Clinton.

Ms. Alt lives in Manhattan, but her year-and-a-half-old business, Melissa Alt Cakes, is based in Teaneck, where she grew up. She’s 24 years old, and graduated from the Pratt Institute in Brooklyn.

“The head is made of modeling chocolate sculpted around a ball of foil, with chocolate on top,” Ms. Alt said. “It takes 15 hours just to sculpt the head. The body is chocolate cake, with chocolate frosting and fondant for the suit.” Ms. Alt’s giant portrait cakes are priced at $7,000.

Though it was Ms. Alt’s Trump cake that has been featured on television and in print — from “The Tonight Show Starring Jimmy Fallon” to the pages of People magazine — her presidential cake-baking started with an order for a Clinton cake for a private Election Day party.

“I thought it would be a good idea to do a Donald cake as well, just for the exposure,” she said. “My manager, Jake Zak, had connections to someone who works with Donald Trump Jr. He asked if Donald Jr. wanted a Trump cake and he said yes, although he didn’t let us know till two days before Election Day.”

Fortunately, Ms. Alt optimistically had started working on the creation before getting a definitive answer. Two days would not have sufficed for all the work involved.

“Most of it I did myself, but I had a friend come for four hours to paint the hair and accessories with edible paint,” she said.

Delivering the cake to Trump Tower in midtown Manhattan, on the other hand, required a squad of helpers.

“The cakes are heavy and I need help carrying them,” she said. “You have to make sure you know how to handle the cake so it doesn’t break. Sometimes we transport them in parts and assemble them at the destination.”

“Between all the press and the protestors outside we couldn’t get near the building, so eventually we wheeled the cake in with two Secret Service men at our sides,” Ms. Alt reported.

“Everyone we passed started taking pictures and posting them. Then, when we brought the cake into Trump Tower, we were told to bring it to the Hilton, where the party was taking place that night. So we wheeled it back outside and brought it to the Hilton. We were there till like 3 a.m. when the final results came in.”

The cake remained intact throughout the party. “Everyone was taking selfies with it,” she said. The next day, she was told, her creation was transported back to Trump Tower and served to Trump employees.

She has no twinges of regret when her works of art disappear into people’s mouths.

“One of my favorite parts is people cutting into my cakes and eating them. I like that they enjoy the art and then enjoy the eating.”

Most of Ms. Alt’s sculpture cakes are commissioned for big corporate events. Prices range from $1,500 to $10,000, the latter yielding enough slices for 250 or 300 celebrants. Most creations are one of a kind. She did a guitar-and-drum set cake for a bar mitzvah party, and someone once ordered a cake made to look like a barrel of pickles.

Ms. Alt certainly has come a long way from her school days at Yavneh Academy and the Frisch School in Paramus, when she’d bake cakes from Duncan Hines mixes for her friends’ birthdays. But even then she gussied them up with elaborate decorations, ranging from Elmo to the Louis Vuitton logo.

Intrigued by watching cake artists on TV, and with a strong artistic bent, she began spending all her free time learning about cake decorating. She had always enjoyed painting and sculpting; why not employ these talents toward something edible?

For her final project at Pratt, she sculpted a full-size woman out of chocolate. After graduation in 2015 she launched Melissa Alt Cakes.

These days, of course, she doesn’t use Duncan Hines mixes but rather recipes she found online and tweaks to her satisfaction.

“I can do any flavor I’m asked for: chocolate, vanilla, red velvet, marble, carrot. You name it.”

Most of her orders are for sculpture cakes, but she also wants to start doing more wedding cakes in the future.

The publicity surrounding the candidates’ bust cakes is sending a lot of attention her way, and she hopes this will translate into the ability to expand her business. “People are very creative and they have good ideas so I’m usually pretty happy with what they want me to do,” she said. “It’s hard work but I really enjoy it.”

For more information, go to www.melissaaltcakes.com.