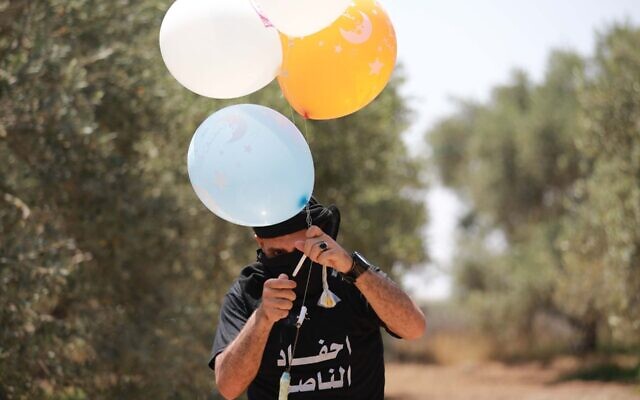 A Palestinian youth in Gaza prepares Molotov cocktails attached to balloons to set fire to Israeli land, May 31, 2019. (Hassan Jedi/Flash90)

The Palestinian Authority’s official newspaper called for violence against Israelis in an effort to disrupt the World Holocaust Forum being held this week in Jerusalem.

A columnist for Al-Hayat Al-Jadida, in an article over the weekend, said that Israel was planning a ceremony to memorialize Jews killed in Europe even as “the Palestinian holocaust by Israel” is ignored.

“One shot will disrupt the ceremony and one dead body will cancel the ceremony,” Yahya Rabah wrote in an article published Saturday, according to Palestinian Media Watch.

In a statement, the Conference of Presidents of Major American Jewish Organizations condemned the article, saying: “Such a call for violence can never be justified, but it is especially repugnant for the PA to incite terrorism deliberately aimed at disrupting an occasion as solemn and significant as this.”

The statement noted that the day the article was published, a teenage Palestinian assailant stabbed an Israeli man in Hebron.

Meanwhile, Israel’s Channel 13 television reported that the Israeli military said it would launch airstrikes in response to any attacks, even if international dignitaries are in the country.

On Tuesday, Hamas praised the launches in recent days of incendiary balloons at Israel and threatened more. Several were discovered in recent days in southern Israel. One with a working homemade explosive attached landed in Beit Shemesh, located about 13 miles west of Jerusalem. No injury or property damage was reported.