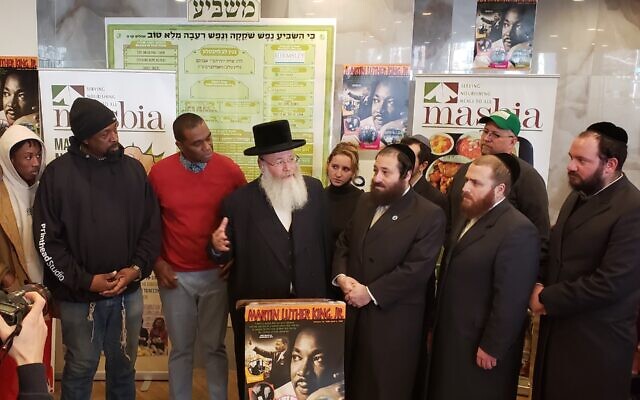 An Orthodox-run soup kitchen brought together a diverse group of local leaders to stock shelves for charity on Martin Luther King Jr. Day.

The event, run by Masbia, a soup kitchen network based in the largely Orthodox Brooklyn neighborhood of Borough Park, was meant as a display of solidarity following a rash of attacks on Jews in Brooklyn and other Hasidic areas near New York City.

Masbia also announced a drive to donate goods via Amazon to communities in Puerto Rico, which has been affected by recent earthquakes and is still recovering from Hurricane Maria. Masbia ran a similar drive for Puerto Rico in 2017, when the hurricane hit.

Also present was Denise Ridley, the city councilwoman who represents the Greenville section of Jersey City, where two shooters killed four people in an attack on a kosher supermarket. The largely African-American neighborhood has a growing Jewish population.

Several pastors, local officials and representatives of the New York Police Department also were on hand for the Masbia event.

“When you’re being attacked, we need other people, other neighbors, to stick up and to stop the hate,” Yosef Rapaport, father of Masbia’s founder, Alex Rapaport, said at the event. “If children are being separated from their parents at the border, put into camps — yes they are camps — I protest. You can’t be quiet when you have discrimination.”