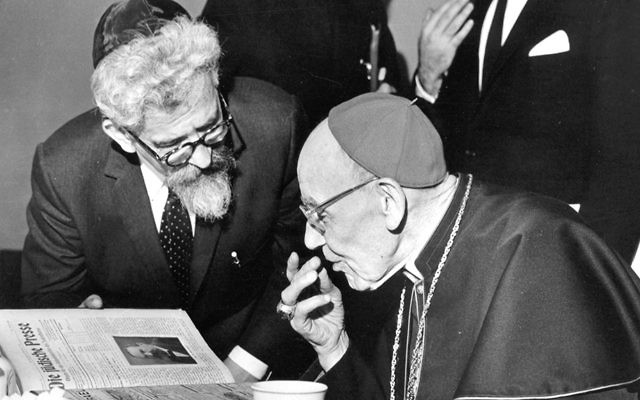 Rabbi Abraham Joshua Heschel and Cardinal Augustin Bea look at a Yiddish newspaper in the offices of the American Jewish Committee in 1963.

Judaism and Christianity have shared the world for just about two millennia, and it seems fair to say that for most of that time, the relationship could have been better. Much, much better.

In the last half century, though, the relationship between Jews and Christians — and particularly between Jews and Roman Catholics — has changed radically, Rabbi Noam Marans of Teaneck says

(EDITOR’S NOTE: Our conversation with Rabbi Marans preceded the Vatican’s announcement this week that it would recognize the “state of Palestine.” The story is updated below.)

It was in 1965, 50 years ago, that Pope Paul VI promulgated Nostra Aetate, a surprisingly brief but thoroughly revolutionary Vatican II document that reworked the church’s relationship with non-Christian faiths.

Rabbi Marans is the American Jewish Committee’s director of interreligious and intergroup relations. He will be at Catholic University in Washington, D.C., on May 20, where he will be on a panel investigating the document; he will respond to Cardinal Timothy Dolan, the Manhattan-based archbishop of the diocese of New York. The other Jew on the panel, Rabbi Yitz Greenberg, the founder of Klal, will respond to another intellectual cleric, Cardinal Kurt Koch, president of the Pontifical Council for Promoting Christian Unity.

The talk will be streamed live; it will be linked from the AJC’s homepage, www.org; the ambitious typists among our readers can go directly to the link, http://ustre.am/11EDZ.

It was Pope John XXIII who began the process that led to Nostra Aetate, which means “in our time,” by saying “something to the effect of ‘Someone should open up a window and let some air into the Vatican,’” Rabbi Marans said.

John XXIII had a good relationship with Jews. “Once, a group of American Jews came to visit him,” Rabbi Marans said. His birth name was Angelo Giuseppe Roncalli; he played with his middle name when he told them “I am your brother Joseph.”

“John XXIII was elected pope in 1958, and as part of his bringing a new era to Catholicism, he convened the second Vatican council in 1962, as part of opening up the church to the world, and the world to the church,” Rabbi Marans continued. “Among his agenda items was creating a new relationship with the Jewish people.

“It was partly because of his personal experience during the Shoah, in which he saved scores of Jews when he served as a Vatican diplomat in many European capitals, in part by issuing false baptismal certificates. It was also the result of his ongoing education regarding the history of Christian and Catholic anti-Judaism through the millennia, and its complicity in violence directed at Jews; of course its nadir was the Shoah.”

Pope John XXIII did not live to see the end of the process he began with Vatican II; he died in 1963. But Nostra Aetate, which was promulgated by Pope Paul VI, took the seeds he planted and nurtured them.

These, Rabbi Marans said, are the document’s five highlights:

It affirms the Jewish roots of Christianity.

It rejects the charge of deicide — the accusation that the Jews killed Jesus that has led to so many killings of Jews. With that, it rejects the so-called “teaching of contempt” aimed at Jews.

It affirms God’s eternal covenant with the Jewish people, thus rejecting the secessionist theology that sees that covenantal relationship as replaced with a newer, Jesus-centered one.

It calls for fraternity and dialogue between Catholics and Jews.

Nostra Aetate was earth-shatteringly revolutionary, Rabbi Marans acknowledged, but it was in some sense a strategic plan, and it could have suffered the same fate as most such plans. It could have been admired and then shelved.

Instead, though, “it has grown in importance since its dissemination, because the Catholic church followed through,” he said. “It issued guidelines and notes and curricula that enabled Nostra Aetate to be a living document.

“And even more importantly, it was the very public gestures of successive popes that gave body to the document.” 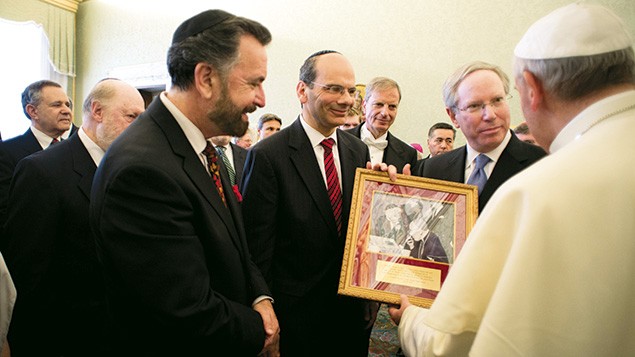 Rabbi Noam Marans, center, stands with a group of AJC representatives as they present Pope Francis with the photos of Rabbi Heschel and Cardinal Bea in 2013.

Pope John Paul II was “the first pope since Peter to visit a synagogue,” Rabbi Marans said. “Later he traveled to Auschwitz, where on bended knee he recognized the horror of the Shoah, and later acknowledged Christian culpability in the Shoah, established diplomatic relations with Israel, and made the first papal state visit there.

“If it had stopped there, John Paul II could have been seen as an aberrant pope, but Benedict,” his successor, “did all of those things again.”

Benedict’s successor, Pope Francis, whom Rabbi Marans calls “remarkable and unique,” is an Argentinian, whose documented friendship with Jews and knowledge of Jewish life makes him entirely unlike the unbroken line of European popes he follows.

The Jewish response to Nostra Aetate was complex and divided. “There were Jews then, and there are Jews today, who understandably reject entreaties by Christianity in general, and Catholicism in particular,” Rabbi Marans said. “But much of the Jewish world embraced it as the beginning of a new era, that would be followed by a process by which it would ultimately be measured.”

Some Jewish groups — notably his, the American Jewish Committee — had been involved in the process that gave birth to Nostra Aetate all along, and maintained their involvement after it was released. Rabbi Abraham Joshua Heschel, the 20th-century theologian and writer who taught at the Jewish Theological Seminary, worked closely with Cardinal Augustin Bea on the document. “They had multiple meetings in New York and in Rome, including on March 31, 1963, right here where I am sitting, here in the AJC office,” Rabbi Marans said.

“The process has been remarkable, both for Christians and for Jews, through dialogue, education, institution-building, and above all for relationships that were inconceivable before Nostra Aetate,” he continued. “Today we take it for granted when a cardinal or a bishop or a priest appears together with a rabbi. We have generations of Jews and Catholics who don’t even know what we are talking about, because the process has been so successful.”

Many young Jews have never heard of the concept of “Christ killer,” he said; others have learned it, but only in an academic context, as history.

Still, Rabbi Marans said, it would be unwise and ahistoric to pretend that the relationship between Catholics and Jews is perfect. “There is an asterisk on all this,” he said. “Innumerable challenges have arisen since Nostra Aetate.”

The most recent and perhaps most egregious challenge is posted by this week’s statement from the Catholic church that it is about to sign a treaty that will recognize the “state of Palestine.”

The American Jewish Committee, like much of the rest of the organized Jewish world, has responded, with sadness and dismay. Its formal response came from its executive director, David Harris.

“Formal Vatican recognition of Palestine, a state that, in reality, does not yet exist, is a regrettable move, counterproductive to all who seek true peace between Israel and the Palestinians,” Mr. Harris said.

“There is a reason why the U.S., the European Union and others have long agreed that statehood can only be achieved through direct, bilateral negotiations between Israel and the Palestinian Authority. Meanwhile, the West Bank is ruled by the Palestinian Authority, whose leader, Mahmoud Abbas, just marked the tenth anniversary of what was meant to be a four-year term, and Gaza is governed by Hamas, a terrorist organization. What and where exactly is the ‘State of Palestine’ today?”

“We are fully cognizant of the Pope’s good will and desire to be a voice for peaceful coexistence, which is best served, we believe, by encouraging a resumption of Israeli-Palestinian peace talks, rather than unilateral gestures outside the framework of the negotiating table,” Mr. Harris.

Other challengers are smaller in scale; there are lingering theological differences that most likely are irreconcilable. The question there is whether they matter. And then there are the missteps and insensitivities that cannot be ignored. Aside from this week’s announcement, “The biggest two were Pope John Paul II welcoming Kurt Waldheim on a state visit in 1987, and the second would be the Carmelite convent in Auschwitz,” Rabbi Marans said. “And there were many others.”

A little background — Kurt Waldheim, a former United Nations secretary-general, was the president of Austria when he paid a state visit to the Vatican. Mr. Waldheim also had been a member of the Nazi Wehrmacht, stationed in Salonika, Greece, when the Jews there were deported to their deaths. That, said many people, including many Jewish groups, made him guilty of war crimes. The convent was built on the concentration camp’s grounds in 1984; it was moved in 1994, but a huge cross there remains.

Still, despite these missteps, “This is a moment for celebration of this history and commitment to the future of this project, which is ongoing,” Rabbi Marans said. “It is not complete. But still it is worthy of celebration.”