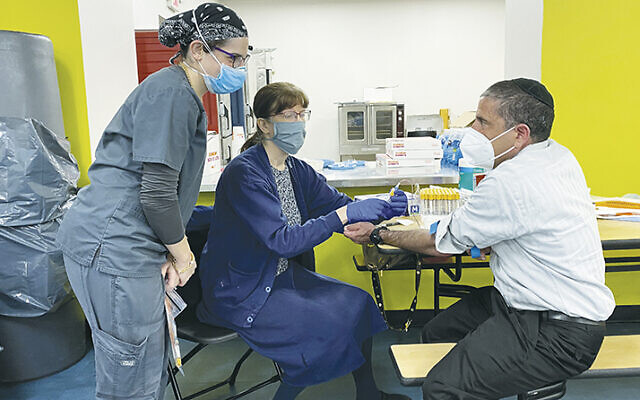 I’m in no mood for suspense these days, so last things first: I have no antibodies to the covid virus.

The word came Monday afternoon with a call from Mount Sinai Hospital in Manhattan.

I got that call because last week Mount Sinai, in partnership with Holy Name Medical Center and two dozen volunteers, tested 500 people for covid antibodies. Those were people who, like me, either had been infected with covid — or suspected they were.

Last Thursday at 3 p.m., I walked over to Yeshiva He’Atid in Teaneck, my mask on and my glasses fogged, and found my way into the gym. There were three widely separated registration tables in that large space.

Registration, and the subsequent bloodletting, had that uncanny feeling of venturing out in our socially distant times, the sense that people are so widely spaced and sparse, and yet the collection of people — three people at tables, me and a couple other donors — was so much bigger than the solitude I’ve become used to, as I write from home.

There were so many people — and yet so few.

I was handed a bag with two empty vials labeled with my information; I took them to the adjoining lunch room. Then I was pointed to one of a dozen widely spaced stations where trained professionals stood to draw blood.

“We had 20 volunteer medical professionals and three or four from Holy Name,” Ora Kornbluth said when I called her this week. Ms. Kornbluth is the executive director of Yeshiva He’Atid, a Bergenfield council member, and the coordinator of the screening.

(Not directly related to my bloodgiving saga, but relevant for people in Bergenfield: This week the town began offering covid testing for any residents who want it, with no symptoms required. The testing is drive-through at Veteran’s Memorial Park, and advance online registration, as well as proof of residency, is required. And as I was writing this article, word came that Teaneck is following suit.)

The nurse at my station — a rather fancy word for an encampment at a lunchroom table — drew two vials of my blood with trained ease. She had grown up in New Jersey, had attended Frisch for high school, and now after college, and with her nursing degree, she had returned to the Garden State to shelter with her parents. Spending the afternoon drawing blood in a yeshiva lunch room was a welcome chance for her to do something. (Had I been less discomforted by venturing forth from my apartment, I would have gotten her name — though it is hard to take interview notes when there is a needle in your upper left arm and clear vials are filling with your dark red blood.)

After the blood was collected, it was spun in centrifuges brought by Mount Sinai. With medical professionals wearing their garb, and all of us wearing masks, there was a high tech, scientific vibe to the mostly empty lunch room. Nonetheless, I left quickly; lingering seemed against the protocols of social distancing. 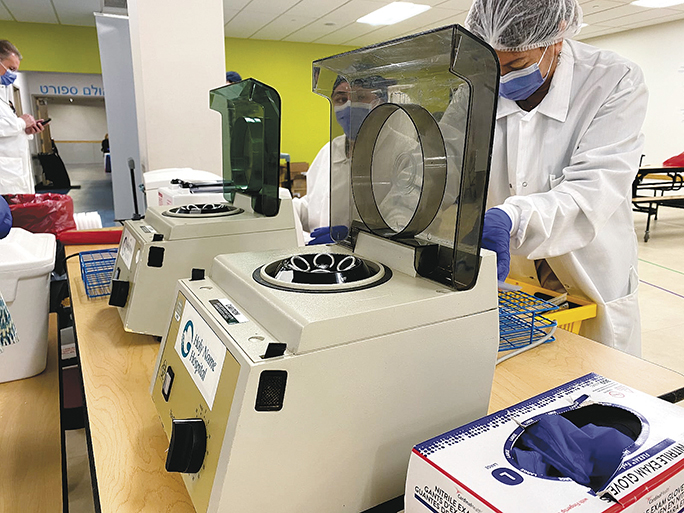 Dr. Adam Jarett, Holy Name’s chief medical officer, explained that Mount Sinai and Holy Name have been collaborating in certain clinical realms for “six months or so.” He said that Holy Name already has treated “quite a few patients with plasma” from donors who had covid anti-bodies. “This is still experimental treatment, and it’s too soon to have definitive answers” about how effective it is. But the preliminary word is good: “My front line clinicians say they’re seeing a clinical response when patients have been given plasma,” Dr. Jarett said. “They’re seeing a lowering of fever and improvement of oxygenation levels. Their gut feeling is that plasma does work. We do want better science to be done, which is happening now. It’s being studied in more formal settings.

“There’s a lot of good reasons to think the antibodies and the serums will work. It’s a model that is used to treat other viruses,” he said.

Using antibodies from covid survivors is only one of the experimental approaches Holy Name has used to try to treat covid sufferers.

“We were involved in the early use of Remdesivir, which is now more widely available,” Dr. Jarett said. “We’ve been using interleukin-6 blockers. We were one of the first hospitals in the country to treat covid with placental stem cells, working with a company out of Israel. We’re in a new study using radiation therapy to treat patients in the middle stages.”

Dr. Jarett said that covid cases peaked at Holy Name “a little more than two weeks ago, with 250 patients. It’s now down to 85. It peaked at 45 clinically ill patients. We’re now down to 17. We’re seeing a continuing slowdown of the pandemic. We’re preparing for a point where we can resume normal operations.”

Those preparations include “a head to toe disinfection of the hospital,” as well as beginning to close down some of the units dedicated to covid. “Our emergency room is ready for patients who don’t have the corona virus,” Dr. Jarett said. “We’re separating corona patients.”

Dr. Jarett said that people who had postponed procedures at the hospital should consult with their physicians about rescheduling them in cases where delays can be dangerous.

He urged that the general opening up of the stay at home orders and social distancing be done slowly.

“Some of the small things we’re seeing, like parks opening up, that’s the first step,” he said. “We need to do that for a couple weeks and see whether doing that small incremental change has an impact on the number of corona patients. If we don’t see a jump, we can continue to open up society. If we do see a jump in cases, we have to pull back very quickly. We need to go very slowly and be prepared for the reality we may see an increase in cases. At Holy Name, we’re prepared for that if it happens.”

Even with things opening up, “people need to continue following social distancing rules. You should wear masks. You should not go out if you can avoid it.”

After I left Yeshivat He’Atid and returned to my house of isolation, my blood was taken to Mount Sinai, which has been at the forefront of studying the potential of the antibody treatment.

“We have the most accurate test, with the highest specificity,” Dr. Joshua Shatzkes explained. Dr. Shatzkes is a cardiovascular specialist and assistant professor at Mount Sinai. “We’re looking to see if patients have the antibodies, and that their titers” — that’s the concentration of the antibodies in the blood — “are high enough to make for plasma donation.

“Particularly in the Jewish community, where they were hardest hit, about half the people that are tested are good candidates for donation,” he said.

If you’re a good candidate, as I had hoped to be when I went to get tested, you can go to a blood bank to have the plasma taken. It’s not exactly the same as a regular donation. They’re taking a different fluid, and it takes a little longer. One donation “can be used to treat as many as three people.” Not a bad lifesaving return on an hour or so worth of blood giving. Donors can give once a week for four weeks.

Will donating antibodies hurt your own immunity to future covid exposure?

“We don’t think so,” Dr. Shatzkes said. “The body — the B cells in your blood — continues to make the antibodies. Over time your immunity wanes, but we believe at least for several months people will be immune. Other corona viruses” — SARS and MERS — “gave immunity for two years.”

Overall, he said, Jewish communities “have contributed a lot by coming together in these antibody drives. The majority of people donating blood into the Mount Sinai system are coming from the Orthodox Jewish community.”

Not long after I spoke to Dr. Shatzkes, the call came about my own blood and my own antibodies — or my lack thereof.

It wasn’t just me who was surprised by the negative results. For this I risked my health attending an ill-advised simcha? For this I suffered, exceedingly briefly and relatively painlessly, through a night of 100 degree fever?

“I’m speaking with a lot of people who are surprised to hear they’re negative,” I was told by the woman who reported my results.

It turns out that evading serious illness and then being able to donate blood plasma heroically really don’t go together. “Across the board, the people with high antibody results have been telling me they were very sick.”

It’s been less than a day since I received the call; I haven’t yet left the house. When I do, I’ll be a little more fearful of exposure; a little more cautious in how I position my mask. I’m in no mood for a surprise these days.