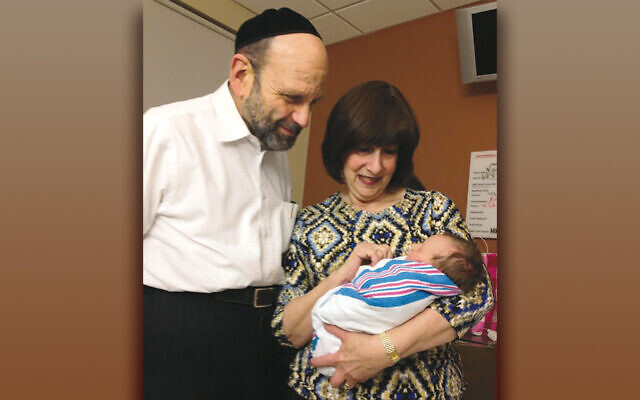 Teaneck’s Congregation Beth Aaron is in shock, because two of its members were hit by a car last week.

Sheldon Mermelstein, 75, died from his injuries; Micah Kaufman, 41, remains in a coma. His prognosis is unclear.

The two were crossing West Englewood Ave. after having been at minyan at Congregation Bnai Yeshurun in Teaneck.

At Mr. Mermlstein’s funeral in Teaneck on Sunday, his rabbi, Larry Rothwachs, couldn’t quite keep the sobs from his voice.

“An entire community is so deeply pained and saddened and simply unable to process the loss that we have to face,” Rabbi Rothwachs said then.

Mr. Mermelstein “was a very special individual,” he told the Jewish Standard later.

“Even though he had begun to enter his retirement years, he was not really in a retiring mode,” Rabbi Rothwachs continued. “He took on a very meaningful active Torah learning schedule. He was a regular participant in shul services, morning and night. He was the head of our chevra kadisha,” the synagogue’s burial society.

“He was a sage figure in shul, and he was very respected by all,” Rabbi Rothwachs continued. “He connected very well to people of all different ages.”

Mr. Mermelstein was married to Frances; he was the father of four children and a proud grandfather many times over.

“He had very strong convictions about what was right and wrong, but the was not divisive,” Rabbi Rothwachs said. “He expressed his convictions in a way where people listened even if they disagreed. He was not a person who fought with people or had enemies. He left room for other people’s opinions.”

Mr. Mermelstein was remembered for his devotion to his family and his commitment to the community.

“The first thing he did every day was he called his mother,” his son Chaim Mermelstein said.

And he would wait for his wife before eating breakfast — even if he was up hours before her.

Chaim said that when his parents moved to Teaneck in the mid-1970s, Beth Aaron did not have a daily minyan, so his father would drive to Bnai Yeshurun every morning for services. Then he decided that it was time to start an evening minyan at Beth Aaron.

“I used to come with my father to shul,” he said. “They would get on the phone and go down the shul list and start calling people to make a minyan. We would come home at nine o’clock from a quarter-to-eight minyan. He wasn’t going to stop. He wasn’t going to give up.”

One of Mr. Mermelstein’s grandsons, Yehoshua Mermelstein, spoke at the funeral.

“Our zayde was always willing to learn from anyone about everything,” he said. “His love was for Torah. But he learned anything from anyone. He had no shame about asking for someone to explain something to him.

“So many of my friends talked about their relationship with my grandfather. When he spent yontif with us, he hung out with my friends. He always felt deeply connected. Whether it was someone he knew for 60 years or a granddaughter who was 5 years old, he was able to connect with them.”

Yehoshua said that despite his grandfather’s sensitivity — “Zayde would cry about everything” — he served on the chevre kadisha, “dealing with real sad things all the time.” How did he manage? “He had a deep commitment to do what was right.

“I don’t know what word is the opposite of lazy, but I just think, ‘Zayde.’ There was nothing he wouldn’t do if he felt it was right.”

Rabbi Rothwachs said that Mr. Mermelstein grew up on the Lower East Side of Manhattan, where “he was very close to Rabbi Moshe Feinstein, the great rabbi and recognized Jewish leader.

“Shelly lost his own father right after his bar mitzvah, and the Feinstein family accepted him into their yeshiva for tuition of a dollar a month. He always had tremendous gratitude and appreciation for the kindness they bestowed on him and his family at the time.”

Mr. Mermelstein was buried in Israel.

“They are pillars in the Teaneck Jewish community,” Mr. Katz said. “They helped build Beth Aaron to what it is today. The entire family are the nicest, kindest people. To say that anyone in this family would give you the shirt off their back is an understatement. They would bring the shirt to your house and leave it on your dresser, folded.”

Mr. Katz said the community is “shocked and sad and torn,” while “hoping for Micah’s speedy recovery.”

On Saturday night, Mr. Kaufman was among the honorees of Renewal, an organization that facilitates kidney donations. In May, Mr. Kaufman donated a kidney to Rebecca bet-Alkhas Irani, an 85-year-old grandmother of two.

Mr. Katz said there is a third tragedy in the Teaneck Jewish community: The driver who killed Mr. Mermelstein and put Mr. Kaufman into a coma.

“The case is still under investigation,” Mr. Katz said. “The driver is from Teaneck community as well. She’s a mother. Sadly, this could have been any of us. We’re all busy going back and forth, whatever the daily grind is.”

“Nobody knows the streets as well as the people who walk to synagogue,” he said. “Teaneck is very pedestrian friendly, but we also have to make sure we’re pedestrian safe.”