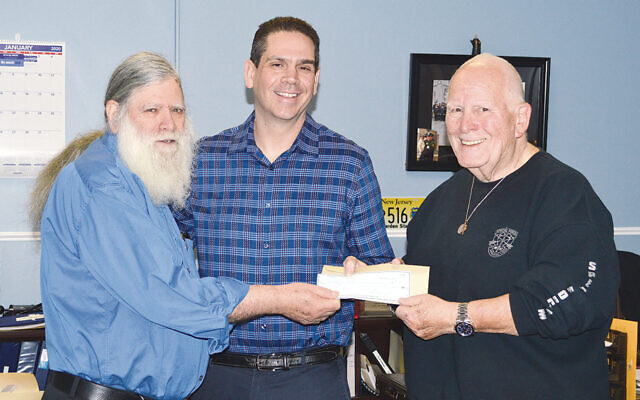 Responders Run secretary Howard Cohn, left, and its president, Bob Nesoff, right, present a check to Carmine Disbrow, the president of the Jersey City Police Benevolent Association, to help the family of Detective Joseph Seals. Mr. Seals was murdered last month by a pair of terrorists who later went on to shoot up a kosher market, killing three more people.

“Detective Seals died a hero, and the Responders Run board members voted to make a donation to his family,” Mr. Nesoff said. “Our event was designed to provide financial assistance to all First Responders, police, fire and EMTs who are killed or seriously wounded in the line of duty.”

The rally, held last August, began in Paramus and continued on a police-escorted ride through Bergen County, also raised funds for the Special Operations Warrior Foundation and the Disabled American Veterans. This year’s ride is set for August 2.

Responders Run is incorporated in New Jersey as a nonprofit and the IRS has awarded it a 501(c)3 designation. It has no paid officers or employees and is run entirely by volunteers.

Mr. Cohn and Mr. Nesoff are former presidents of the former New Milford Jewish Center and now are members of the JCC of Paramus/Congregation Beth Tikvah.