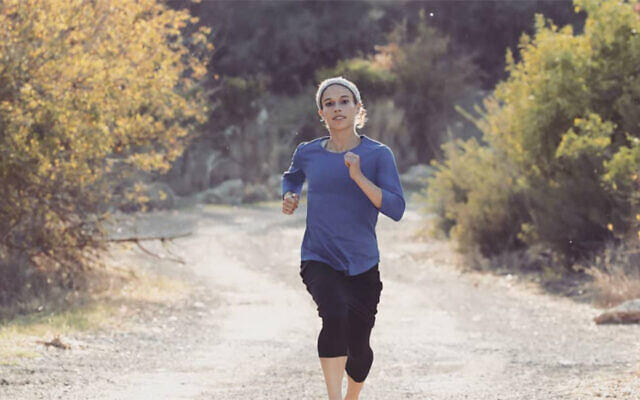 What motivates you? What makes you get out of bed in the morning? Is it your family? Your job? Your friends? And for argument’s sake, let’s say that you don’t have any of those things, and that some days you just don’t want to do anything at all. Then what do you do? Where do you find motivation then?

Well, if you are looking for someone to motivate and inspire you, try listening to Beatie Deutsch; she’ll be at the Young Israel of Teaneck next Thursday. (See the box for details.) Known on social media as “Marathonmother,” Ms. Deutsch is an Orthodox mother of five — and she also is the Israeli national champion in both the marathon and the half marathon. Her time for the marathon— 26.2 miles — is 2 hours and 32 minutes. Ms. Deutsch now is training to represent Israel in the Olympics; as a result, in 2019 the Jerusalem Post named her as one of the year’s 50 most influential Jews. That’s pretty impressive. She was born in Silver Spring, Maryland, and grew up primarily in Passaic; she went to Yeshiva Ktana there and then on to Manhattan High School for Girls. She moved to Israel in 2008, and now lives in Har Nof with her husband, Michael, and their kids.

Four years ago, Beatie Deutsch was looking for motivation herself. That’s when she started running. She’d had four children in six years, and she just wasn’t feeling like herself; certainly she wasn’t feeling like her best self. “I had totally lost myself,” she said. She still hadn’t finished losing the weight she’d gained during her last pregnancy, and she just wanted to regain some control. “I wanted to get back in shape,” Ms. Deutsch said. “I chose the huge distance of the marathon for my first goal because I needed something to motivate and commit me to training.” And commit she did.

While she was working full time and being a mother, Ms. Deutsch would wake up very early in the morning to get her training in, and the workout would energize her for the rest of the day. Still, how did she find the time? “If you want something badly enough, you find the time to get it done,” she said.

Now that she is running professionally, training for races has become her job. Now it’s easier for her to combine her roles. On her Instagram page, where she has more than 10,000 followers, she says, “Motherhood is harder than any marathon I’ve ever run. If you are a mother, you run a marathon every day.” The only difference is that Ms. Deutsch really does run marathons!

Now she also has become a public speaker. She started doing it when a few people asked her to tell her story publicly because they found it so inspirational. “I realized that I had the opportunity to make an impact and share the lessons and insights that I had gained, myself, along the journey, and because I view the marathon as an incredible metaphor for life,” she said.

Where does she find motivation? She listens to many podcasts made by prominent athletes.

When she is asked where she finds motivation for herself, Deutsch says she listens to many podcasts by various athletes and learns from them. She tells herself “Belief propels you forward, and fear holds you back. If you want to go after a goal, you have to fully believe and invest yourself in it and you can’t let the anxiety, fear or worry enter your brain at all.”

They are wonderful words to live by.

What: Will speak to women and men for the Women’s Learning Initiative at the