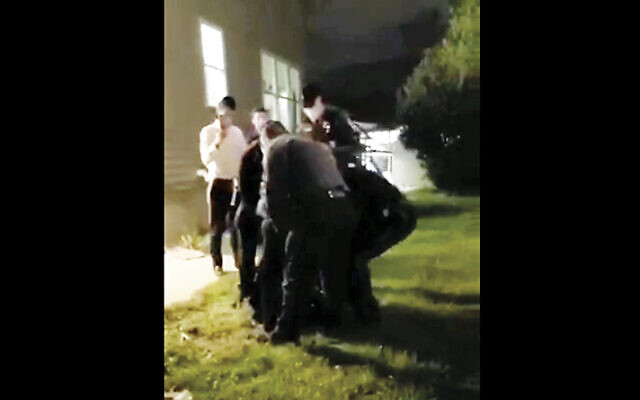 An Orthodox rabbi in Lakewood who is suing Governor Phil Murphy over restrictions on gatherings was arrested late Monday night for holding such a gathering.

Rabbi Yisrael Knopfler was charged with resisting arrest, obstructing the law, and violating the governor’s executive order banning meetings, according to the Asbury Park Press.

The arrest came after police broke up an event that Knopfler organized on Lag B’Omer, a minor holiday commemorating the end of a historic plague. Public celebrations, which typically include bonfires and concerts, were prohibited this year because of the current plague. But some people, including Knopfler, went ahead with them nonetheless.

A video of Knopfler’s arrest was posted on FAA, a whistleblower Facebook page that focuses on the Orthodox community. It shows the police arresting the rabbi while a crowd shouts at the police, calling them “Nazis,” “Gestapo,” and “anti-Semites.”

Knopfler is believed to be from the charedi branch of the family related to rock musician Mark Knopfler of Dire Straits, the son of a Hungarian Jew who emigrated to England.

Last week, Knopfler joined another New Jersey clergy member, a Christian minister, in a lawsuit challenging Mr. Murphy’s executive order barring gatherings of any size. His argument is that if some essential businesses can stay open with adjustments, houses of worship should be allowed to do the same. That lawsuit includes an account of an April gathering at Knopfler’s synagogue that was dispersed by police, according to the Asbury Park Press.