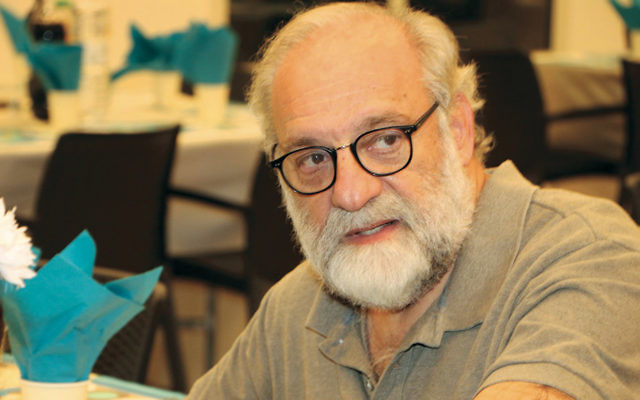 This March, Dr. Tom Grunfeld was in Israel.

The most important thing to know, Dr. Tom Grunfeld said, is that Kim Jong-un is not a madman. In fact, his actions are rational, given the choices he has.

Wait. What? And who is this Dr. Grunfeld anyway?

Dr. Grunfeld is a SUNY distinguished teaching professor at Empire State College of the State University of New York. He specializes in East Asian studies, and has made many trips to the region, as well as to other places around the world. Although his particular focus generally is on China and Tibet, he also studies North Korea; in fact, and unusually, he’s been there.

So when he talks about the dangers of misunderstanding Kim, as he will at the Kaplen JCC on the Palisades on January 25 (see box), he knows what he’s talking about.

“There are two things that are going on in the major media,” Dr. Grunfeld said. “One is the cartoonization of the North Korean leadership. That is very dangerous. When you don’t take an opponent seriously, you can’t really deal with him.

“The United States had contempt for the Vietnamese when it was in Viet Nam, and so did the French before them. And they both lost.”

He is not saying that Kim is anything but monstrous, he added. Nonetheless, “it is quite brilliant, in fact, what he is doing, from his perspective. Heightening tension, and then agreeing to talks. It’s very clever.”

“It is at our peril if we don’t understand who our opposition is, because then we can’t make serious, coherent, practical, do-able options to fight it. Telling Kim to demilitarize before talks isn’t rational. You don’t go into talks by first saying that you’ll have to give up all your leverage, and then we’ll talk. No one would do that.

“If you’re so weak that you’d do that, then what is the point of talks? Then there’d be nothing to negotiate. So the first thing we have to do is understand Kim’s perspective.”

The next thing Americans should understand about the situation in North Korea is its history. “The history is talked about in academic and foreign policy circles, and it’s no secret, but the average person doesn’t know it,” Dr. Grunfeld said. “Twice — in 1994 and in 2003 — North Korea agreed to freeze its nuclear program, and both times the United States backed away. So in fact it has been willing to stop the program in return for things it needed.

“In 1994 the North Koreans had a deal; they didn’t have a single bomb or missile then. The IAC sent people there, the Koreans locked up the labs and closed up all the sites. But when George Bush came into office they tore up the agreement, and the IAC got kicked out and the locks were thrown away and they reopened the sites, and they developed the missiles.

“A few years later there was an agreement, first with Clinton and then with Bush — and then the neocons sabotaged it.

“So it’s not that they’re madmen.”

It is not at all that he is defending North Korea, Dr. Grunfeld added. “It is a terrible place. But in terms of the nuclear agreement, they have acted rationally. They have certain goals, and they are willing to compromise to meet those goals.”

What are those goals? “Power,” he said. “The family — three generations of Kims now — just want to stay in power.”

They are despots, he said; most of the country lives in absolute poverty but the inner circle does better, if not actually well. (The family itself does quite well, thank you.) “The Kims are absolute rulers. They may have advisors, but in the end they make all the decisions. And we don’t know how they make them — we never have had a high-ranking defector. It is a very tight circle. The CIA doesn’t talk to me, but my guess is that the CIA does not have anyone in that circle.”

North Korea is “incredibly weak,” he continued. “I don’t know what the annual income is, but I think it’s under $1,000 a year. They have serious food problems. This new year’s message hinted at those problems, which is extraordinary. The people are stunted. The place is dirt poor. They have nothing to protect themselves with except this nuclear program.”

About 10 years ago, Dr. Grunfeld went to North Korea. It’s hard but not impossible, he said; when he went, there were about 2,500 tourist visas available each year, for visitors from around the world. There is a separate visa pool for Chinese and ethnic Koreans, he added.

He went alone, not on a tour, because he wanted to see as much as possible; he stayed for the maximum time allowed — nine days. He had two minders and a driver; “they were with me 24 hours a day,” he said. “I wasn’t allowed out without them.”

There were two hotels in Pyongyang; the one where he stayed, which had 40 stories, had very few guests. The minders stayed in the hotel with him, but not in his room. His room had electricity; theirs did not. But most of the country has no electricity — the internet has many photos of North Korea at night, a black hole surrounded by the lights of neighboring countries — so they were used to it, Dr. Grunfeld said.

At one point he circumvented the rules because he was invited to dinner at the Swiss embassy; he was picked up and brought back home by a Swiss driver, not a North Korean. “Because they were diplomats, they have a different status,” Dr. Grunfeld said. “The diplomats also had internet access, which most people don’t have. The elite in North Korea, though, do have intranet access,” which allows them onto the country’s internal internet but not to the electronic world beyond its borders.

“They” — his minders and driver — “were very unhappy with my visiting the embassy, and they were very glad to see me back, because if I had done something wrong, they would be punished.”

Although his minders were obtrusively by his side most of the time, they were not allowed to eat with him; that would make the sort of impersonal relationships that were mandated harder to maintain.

Only the elite are allowed to live in the capital city, Pyongyang; life there is better than outside the city, but it’s not good, Dr. Grunfeld said.

He has a striking memory from his stay there.

“I have been in Afghanistan. I have been in Bangladesh. I have seen poor countries. This country is really poor. It is really very poor. And all it has to protect itself is nuclear weapons.

“The irrationality is on the president’s part, not on Kim Jong Un’s.

What: Will talk about North Korea at the JCC U

Where: At the Kaplen JCC on the Palisades, 411 East Clinton Avenue in Tenafly

And also: The JCC U is two sessions per meetings; at the second session, beginning at 12:45, Dr. Jeremy Dauber, a charismatic and charming speaker who grew up in Teaneck and teaches at Columbia, will talk about Jewish humor.

The JCC U offers coffee before the first speaker, beginning at 10:30; participants are encouraged to have lunch, on their own, between the two sessions.

To register or for more information: Go to the JCC’s website, www. jccotp.org, and click on Adults, then Lectures and Learning, and then JCC U, or call Kathy Graff at (201) 408.1454.