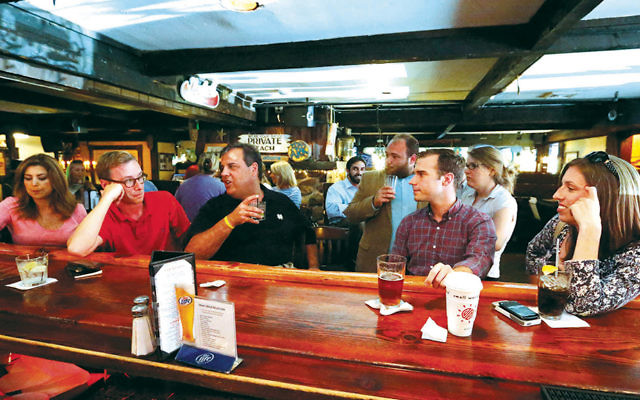 Chris Christie looks back over his shoulder at Matt Katz; from left, the other reporters are Christine Sloan of Channel 2, Josh Dawsey of the Wall Street Journal, Matt Arco of the Star-Ledger, AP’s Jill Colvin, and Melissa Hayes of the Bergen Record.

Matt Katz, a reporter for WNYC, the New York City public radio station, sees Governor Chris Christie as a tragic figure, Falstaffian in his appetites, Nixonian in his overreach, almost Icarus-like in his downfall.

Mr. Katz has covered Mr. Christie since 2011, when the newly inaugurated Republican governor’s raw political talent made him a rising star so brilliant as to be practically blinding. Mr. Katz has seen Mr. Christie’s rise, his mortifyingly embarrassing fall, and now his new zombie-like revival, in thrall to Donald Trump.

On May 19, Mr. Katz will talk about Mr. Christie at the JCCU at the Kaplen JCC on the Palisades in Tenafly. (See the box for more information.)

Mr. Katz, who lives in Philadelphia, began following Mr. Christie for the Philadelphia Inquirer because the newly elected governor was seen as a likely presidential candidate, therefore in need of a reporter devoted to him. In 2013, Mr. Katz moved to WNYC. “I started the week after he won re-election,” Mr. Katz said. “He was beating everyone in the polls,” the years-in-advance ones that heralded the still-far-away presidential caucuses, primaries, and general election campaign. “I got a book deal in 2013, when he was beating everyone else in the Republican field. He won by 21 points in New Jersey, got 51 percent of the Hispanic vote, 60 percent of the women’s vote. It looked like a lock.

“I sold the book to the publishers. Everyone wanted it.”

Three weeks after the contract was signed, when the email that signaled the beginning of Bridgegate was released, the world learned that it had been time for some traffic problems in Fort Lee.

Bridgegate, of course, is the scandal that derailed Mr. Christie, tarnished his image, and made it impossible for him to win the Republican nomination for president, at least during this cycle.

Mr. Katz said that fewer people might have read his book, “American Governor: Chris Christie’s Bridge to Redemption,” than might have had Mr. Christie not fallen, but “it is a better book because it is about the rise and fall, not just the rise.”

Before Bridgegate, Mr. Christie had real magic, Mr. Katz said. In 2011 and 2012, “When I saw him at town hall meetings, people of all stripes were totally charmed and enchanted by him. In the first days after Sandy, when he went out there, met people, talked to people, hugged people, it made a big difference to people on the ground. 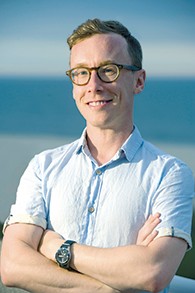 “I think that his best moments as a politician, and something that made him remarkable for this day and age, was when Sandy hit, right before the election. Christie had been campaigning for Mitt Romney nonstop. He welcomed Obama, and, when on Fox and Friends, talked about what an excellent job Obama was doing for New Jersey.

“They” — the talk show hosts — “said ‘You invited Obama?’ and he stopped cold, and looked at them, and he looked harried, and he had that fleece on, and he said, ‘If you think I give a damn about politics at a time like this, you don’t know me at all.’

“Except, of course, for more ideological people, and union members, and Democrats, and teachers, and other public employees. People who were paying more close attention to policy didn’t like him. But it’s almost hard to remember how vastly popular he was throughout the state, and across ideological and ethnic lines.”

Was that all an act? Mr. Katz doesn’t think so. “Part of it was, but not all of it,” he said. “Although my view of him has changed a bit since he endorsed Trump. That had a more dramatic effect on my thinking than anything else he’s done has had.”

“I always knew that he was an aggressive, hard-nosed politician, and that he would operate in shades of gray. But I always felt that even if he did operate with a cutthroat mentality politically, he did believe things. That he had hardcore beliefs that he wouldn’t waver from. That everything wasn’t just a means to an end.

“But the Trump endorsement is hard to tie with that, because it seems to contradict everything that he says and stands for. It’s confounding.”

Before Bridgegate, Mr. Katz added, Mr. Christie was able to take advantage of New Jersey’s lack of its own large media outlets to keep messy local issues out of the news but to take advantage of the national markets on either side of the state. “His popularity nationally, in turn, made New Jerseyans like him. He was on Saturday Night Live and Letterman and all the late night shows. That all made him appear likable.”

The parallels between Nixon and Christie, between Watergate and Bridgegate, are unmistakable, although perhaps it is fair to say that if the first time around, with Nixon, it was tragedy, this second time, with Christie, it’s farce. (Remember the governor’s quip about how he was responsible for the traffic fiasco because he was out there, “wearing overalls and a hat, moving cones.” Once imagined, that mental image cannot be erased.) 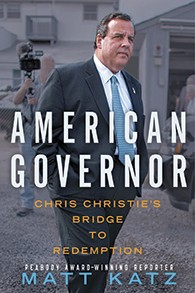 Just as we don’t know whether Richard Nixon ordered the raid on the offices in Watergate, we don’t know if Chris Christie ordered the lane closures. We do know that neither Nixon nor Christie needed them; both were likely to win their races, and in fact did. We also know that both Nixon and Christie were deeply involved in covering up the initial crimes. There is even missing information in both cases — by far most of Christie’s texts and emails have vanished, and of course Nixon had the famous 18-minute gap in the tapes. Both men ruined their careers because of the internal flaws that did not let either of them be satisfied with what they had, even though what they had was winning careers.

“After Bridgegate” — which of course is still an ongoing investigation, so this story’s not nearly over yet — “he was a lot less combative with constituents in public. He never used to get protestors, and all of a sudden there were more confrontations. He stopped holding press conferences to a large degree for a long time. He’d always had a combative relationship with us, the press, but he also seemed to enjoy the jousting that came with it, the back and forth. He didn’t seem to enjoy himself grappling with us any more. He thought we were all out to get him.”

Still, Mr. Katz said, “talk to any national political reporter, who will tell you that Christie had the most raw political talent of any of the 17 Republican contenders. He clearly is one of the — if not the — most, talented political communicators in the country.

“In New Hampshire, hours before he lost there, he was still wowing people in town hall meetings. He was bringing them to tears, talking about his mother on her deathbed.

“A last flash of what he could do” surfaced when Mr. Christie went after Marco Rubio in a debate, in a sort of murder-suicide. That was Mr. Christie’s last debate before he dropped out of the race. “It was a high risk/high reward move,” Mr. Katz said. “He was the only one who could have gone after Trump like that, but he decided not to. I think he wanted to demonstrate what he could do in a national election against Hillary, but the voters didn’t buy it.”

What will Mr. Christie do now? “If Trump is president, I think he’ll be attorney general or chief of staff,” Mr. Katz said. “If Trump is not president, I think potentially he could run again, in 2020. America has a short memory. But who knows? Another obvious thing for him to do would be to go into consulting, have some sort of political lobbying and consulting operation, and appear on cable news all the time.

For the rest of this political cycle, Mr. Katz will move from covering Mr. Christie to covering Donald Trump, although, as he points out, right now those two beats overlap. After his talk at the JCC, he will go to a Trump rally in Lawrenceville. “Trump will be charging $200 a ticket, and using the money to settle Christie’s campaign debt from his presidential campaign,” Mr. Trump said. “Then he’s having a $25,000 per person meeting later. That’ll be fundraising for the New Jersey Republican Committee, to pay the Bridgegate lawyers who were retained by the committee.” (This is just a small part of the fees Bridgegate lawyers have run up; taxpayers pay most of the bill.)

“It is fascinating to see the mutually beneficial arrangement between Christie and Trump,” Mr. Katz said. “Christie needed a favor, Trump has to do a rally in New Jersey, even though he has the nomination already, it’s just a helicopter ride away from home for him, and Christie will be working for him at least through November.”