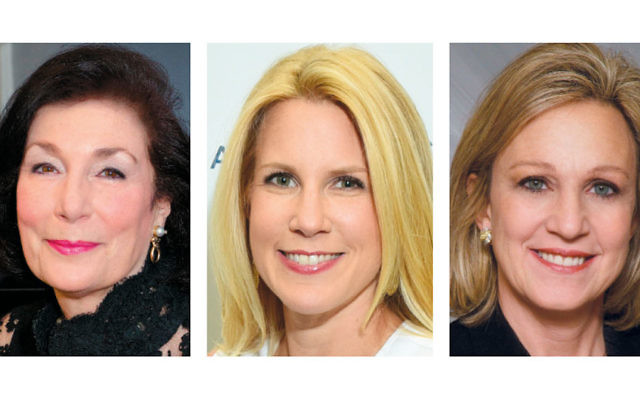 The Kaplen JCC on the Palisades’s “Winter Wonderland,” its annual “Big Night Out” celebration, is set for Thursday, December 8, at 7 p.m., at the Palisadium in Cliffside Park. In keeping with its theme — recognizing remarkable women in the community — the party will celebrate the accomplishments of Dianne Nashel, Tara Jagid, and Assemblywoman Valerie Vainieri Huttle, three visionary women who have made substantial contributions both to the JCC and to the community at large.

The evening will include cocktails and a dinner reception, in a room with views of the Manhattan skyline. Proceeds will support annual scholarships to JCC programs and services.

Dianne Nashel — one of six members of the JCC’s board of advisors, joined the JCC in 1971. Her oldest daughter went to nursery school at the JCC’s first building, in Englewood. Ms. Nashel has been on the JCC’s board of directors and chaired many of the JCC’s departments, including the Leonard & Syril Rubin Nursery School, the Neil Klatskin Day Camp, the Judaic department, and the Therapeutic Nursery. She initiated Shabbat and Jewish holiday celebrations to engage nursery school families, and developed after-school enrichment and adult programs, including the popular art tours with Tobi Kahn. She was a JCC vice president and executive board member. She is involved in Temple Sinai of Bergen County in Tenafly and the Jewish Family Service.

Tara Jagid joined the JCC and enrolled her children in the JCC’s Leonard and Syril Rubin Nursery School. She was chair of the JCC Parent Association’s Chesed committee, chaired the spring and fall boutiques, was vice president and president of the JCC early childhood executive board, and works on the Play Fore! the Kids auction committee.

Assemblywoman Valerie Vainieri Huttle, appointed deputy speaker of the New Jersey General Assembly in 2015, connected to the JCC when her mother participated in the senior adult department. Her family also is an ongoing supporter of the Rubin Run. Ms. Huttle served on the Bergen County Board of Chosen Freeholders. She is now in her fourth term as chair of the Assembly’s Human Services committee and is vice chair of the Transportation & Independent Authorities committee and a member of the Tourism, Gaming, & the Arts Committee. Ms. Huttle has endorsed landmark laws, including the Anti-Bullying Bill of Rights, and the Human Trafficking Prevention, Protection, and Treatment Act. She also endorsed a prohibition against investing pension and annuity funds in companies that boycott Israel or Israeli businesses.

For information or to place an ad, go to www.jccotp.org/bignightout. For information, call Michal Kleiman at (201) 408-1412 or email her at mkleiman@jccotp.org