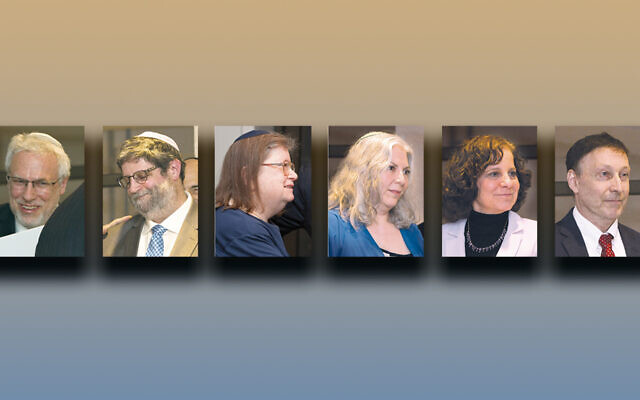 Rabbi David Berkman of the New City Jewish Center; Rabbi Randall Mark of Congregation Shomrei Torah in Wayne; Rabbi Joyce Newmark of River Vale; Rabbi Debra Orenstein of Congregation B’nai Israel in Emerson; Rabbi Amy Roth of Teaneck, the director of congregational schools at Temple Israel of Great Neck; and Rabbi Jeffrey Rubenstein of Englewood, who teaches at New York University, were among 45 rabbis honored for their dedication and commitment at this year’s Jewish Theological Seminary Convocation on January 28. They all were awarded Doctor of Divinity, honoris causa — honorary doctorates — for having served the Jewish community and the Conservative movement with distinction for more than 25 years. Through the degrees JTS conferred, the seminary celebrated the achievements of these important leaders and expressed appreciation for their contributions to Jewish life.

The ceremony took place at JTS in Manhattan. The school’s chancellor, Professor Arnold M. Eisen, conferred the degrees and delivered the convocation address. Rabbi Daniel Nevins, the Pearl Resnick Dean of The Rabbinical School and dean of the Division of Religious Leadership; and Rabbi Julia Andelman of Teaneck, the director of community engagement, sponsored the honorees. Speakers included Alan Levine, chair of the board of trustees; Rabbi Debra Newman Kamin, president of the Rabbinical Assembly; and Rabbi Stephen Weiss of B’nai Jeshurun Congregation in Pepper Pike, Ohio.

The rabbis receiving this distinction included congregational rabbis, Jewish communal professionals, educators, and chaplains from across the United States, as well as from Israel, Europe, South America, and Asia.