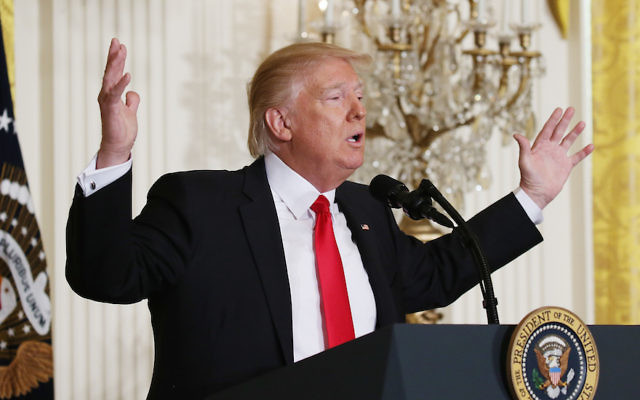 The American Jewish Committee and the Anti-Defamation League decried President Donald Trump’s brusque treatment of a reporter who asked about a spike in anti-Semitic incidents.

“It is honestly mind-boggling why President Trump prefers to shout down a reporter or brush this off as a political distraction,” Jonathan Greenblatt, the ADL’s national director, said in a statement posted on Twitter.

you cant shout down the truth. there is a simple Q all Americans want answered: what will @POTUS do to halt the surge of #antisemitism? pic.twitter.com/SU6588XUek

“Instead of answering a timely and legitimate question, the president chose instead to besmirch the journalist,” Harris wrote.

Jake Turx of Ami Magazine had asked Trump at a news conference Thursday about a recent spike in anti-Semitic incidents, particularly a wave of bomb threats called in to Jewish community centers.

Both statements noted that Trump within the space of 24 hours had evaded other questions about spikes in anti-Semitism, sometimes manifest in expressions by purported Trump supporters: one at the same news conference on Thursday, and one a day earlier at a joint news conference with Israeli Prime Minister Benjamin Netanyahu.

The ADL and the AJC implored Trump to address the spike.

“Respectfully, Mr. President, please use your bully pulpit not to bully reporters asking questions potentially affecting millions of fellow Americans, but rather, to help solve a problem that for many is real and menacing,” Harris said.

The Anne Frank Center for Mutual Respect separately berated Trump for telling Turx that he was “the least anti-Semitic person you have ever seen.”

“Mr. President, that’s an alternative fact on a psychedelic acid trip,” said its director, Steven Goldstein. “Have you been adding magic mushrooms to your chopped liver on matzo?”

Getting married during a pandemic
By Eve Tilem
Covid-19 can change plans, but it cannot take the love from a wedding

The covid diaries — covid 2.0
By Jonathan E. Lazarus
I don’t mask my scorn from those who won’t wear one

JFCS-NNJ bike/hike to fight hunger will be virtual

Banji Ganchrow
Rate times time times social distance
Math is not my thing. At all. My recurring nightmare is not being prepared for a math test and if I don’t take the test, I cannot graduate high school. My vision of what my hell will be like is an eternal algebra class.... Continue Reading

Banji Ganchrow
Self-care, quarantine edition
I  have been trying very hard to keep these columns light, for the most part. No one needs to have the obvious pointed out to them. The isolation, the loneliness, the fear of the unknown — all you have to do is watch a news... Continue Reading
Rabbinical Council of Bergen County issues new pandemic guidance
By Rabbinical Council of Bergen County