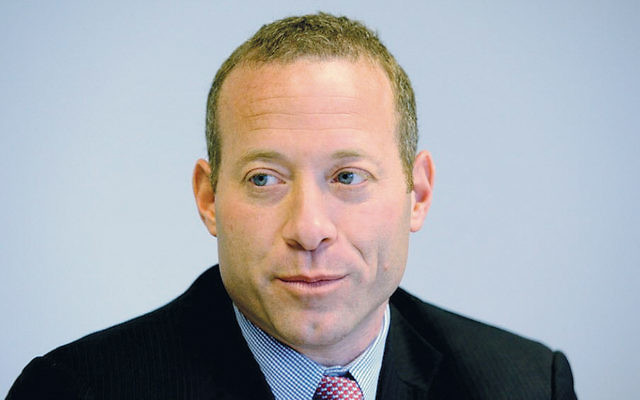 Josh Gottheimer, a Democrat, will be the new Congressional representative for New Jersey’s Fifth District.

WASHINGTON — The Jewish contingent to the U.S. House of Representatives grew from 19 to 23 in Tuesday’s elections, doubling its Republican representation from one to two.

Five Jews overall were newly elected to the House, while one Jewish congressman in Florida is retiring. The Senate Jewish contingent dropped from nine to eight.

Three Democrats picked up seats from Republicans in an otherwise dismal night for their party, which saw the GOP sweep the White House and both chambers of Congress.

One of the newly elected House Democrats is Josh Gottheimer of Wyckoff, who beat his opponent, Scott Garrett, in New Jersey’s 5th District, which includes much of Bergen County. Gottheimer, a former speech writer for President Bill Clinton and Microsoft executive, and Garrett, who had been office for many years and has been known as one of the House’s most conservative members, fought a hard and nasty battle. In its final days, the election was marred with the appearance of an unsigned anti-Semitic leaflet targeting Gottheimer.

The other Democrat who picked up seats are:

• Brad Schneider, who regained the seat he lost in 2014 from Bob Dold in Illinois’s 10th district, encompassing Chicago’s northern suburbs. Dold first won the seat in 2010, then lost it to Schneider in 2012.

• Jamie Raskin, a Maryland state senator, who won the battle to replace Chris Van Hollen in Maryland’s 8th District. The district includes the Maryland suburbs of Washington, D.C. Van Hollen, a Democrat, was elected to the Senate.

Alan Grayson is leaving Congress. He retired as a representative in Florida’s 9th District, in the south of the state, to run for the Democratic nomination to the Senate. He lost.

The Democratic contingent in the Senate will drop by one with the retirement of Barbara Boxer of California. Two Jewish Democrats in Missouri and Wisconsin failed in their bids to replace Republican incumbents.