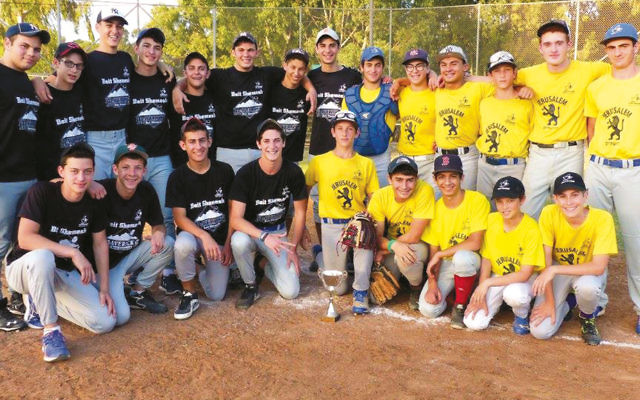 Members of the Jerusalem and Beit Shemesh teams pose together at the Junior League Championships. They reflect a growing interest in Israeli baseball. (Israel association of baseball)

While baseball fans sit on the edge of their bleachers waiting to see if the Chicago Cubs make it to the World Series for the first time in 108 years, local Jewish fans can shift their attention eastward as officials from the Israel Association of Baseball make a presentation in Teaneck.

On September 22, the World Baseball Classic qualifiers will begin at MCU Park in Coney Island, home of the Brooklyn Cyclones, and an Israeli team will be among the contenders.

(According to Wikipedia, the World Baseball Classic provides “a format for the best baseball players in the world to compete against one another while representing their home countries… [It] was created in order to further promote the game around the globe.”)

Mr. Fish, IAB Secretary General Margo Sugarman, and Teaneck native Danielle Barta, IAB’s regional director for Jerusalem, will talk about the history and growth of baseball in Israel and what it is like to represent Israel in international sports at Congregation Beth Aaron in Teaneck. (See the box for more information.) A team member will accompany them.

“When I made aliyah five years ago, I was unaware that there was baseball in Israel, and I knew I would miss my involvement in sports,” said Ms. Barta, 28, who played softball at Ma’ayanot Yeshiva High School for Girls in Teaneck and at Rutgers University. “It took me four years to find IAB, and it’s made my time in Israel so much more enjoyable. It has been a great blending of the two places that I call home.”

She credits Mr. Fish for “incorporating a lot of great programing and elevating the level of the sport and how it’s viewed in Israel” during his three years at the IAB’s helm.

Founded in 1986 as a nonprofit organization, the IAB now has an under-12 team — ranked first in Europe since it won two championships this summer — under-14, under-16, and under-21 teams, and a national team ranked in the low 20s worldwide. Additionally, six leagues encompass about 80 teams in 16 cities across Israel.

The IAB runs a summer camp for kids and Baseball for All, a program in which 15 Jewish middle-schoolers and 15 Arab counterparts meet three times a year for free overnight baseball camps supported by the Jewish National Fund’s Project Baseball.

“We’re concerned with providing a quality program for the 1,000 people in Israel, ages 7 to 55, who want to play,” Mr. Fish said. “We have about 800 registered players and 200 coaches, managers, umpires, and directors. I want to educate people about the successes and challenges of baseball in Israel, and what it’s like day to day.”

In a country where soccer is king and there are just five baseball diamonds (only one of which is on par with an American high school-level field), running weekly practices and scheduling games is difficult, he said. 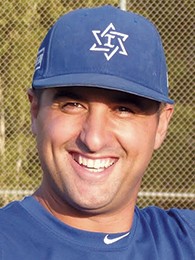 Yet baseball’s popularity is growing among American and European expats and even among native Israelis. In 2014, the IAB established the Israel Baseball Academy for serious young players. It is recognized by Major League Baseball, which means that MLB scouts could come looking for up-and-coming players in the Jewish state.

For the WBC qualifiers, the 28-man roster includes just three players from Israel. That’s because anyone eligible to hold citizenship in a country can play for that country, the IAB’s president, Peter Kurz, said.

“For instance, Mike Piazza played for Team Italy because his grandparents were Italian,” said Mr. Kurz, who also is vice president of the European Baseball Federation.

“Though there are 14 Jewish major leaguers, we can’t use them because their season is going on right now,” Mr. Kurz said. “In the minor leagues and independent leagues there are a couple of hundred Jewish ballplayers from which we put together a team to compete very nicely with the top 20 teams in the world.”

“I was in touch with their parents, and they’re all thrilled to have their sons play for Team Israel and to talk to me about their Jewish background,” he said. “One player did DNA testing because he was so eager to provide documentation.”

Corey Baker, 27, a player for the St. Louis Cardinals’ Double A team in Springfield, Texas, told Ms. Sugarman in an interview posted on Facebook: “As a Jew, I believe we are all connected to Israel in some way. This past offseason I went on my Birthright trip, and that was an unbelievable experience that furthered my connection to Israel by getting to see and experience so much that I had only previously heard about.”

The MLB founded the once-every-four-years World Baseball Classic 16 years ago as part of its effort to internationalize baseball, Mr. Kurz explained. Initially, the world’s top-ranked 16 teams participated. Four years ago, qualifiers were introduced, so another 12 teams could compete for the 16th slot. At the 2012 qualifiers in Florida, Israel made it to the finals and lost to Spain in the 10th inning.

“They were really upset because they wanted to win for Israel,” Mr. Kurz said of the teammates, seven of whom are returning this year as Team Israel squares off in Brooklyn against Great Britain, Brazil, and Pakistan to seek a berth in a first-round pool in Korea, leading to a second-round pool in Japan. Winning and runner-up teams from the second pool will go to the main tourney at Dodger Stadium in Los Angeles in March.

Mr. Kurz recalled that the Americans learned Hebrew words and Israeli customs from the three Israeli players on the 2012 team. For example, when Israel’s national anthem, Hatikva, is played, the teammates were taught to keep their ball caps on their heads.

“They identify with being Israeli but on the other hand they are Jewish Americans, and baseball is very much a Jewish American sport,” Mr. Kurz said. “You don’t have to be tall, big, or fast, and Jews like that kind of sport.”

He noted that after the qualifiers four years ago, the IAB saw a 40 percent uptick in registration. Prize money from MLB for every level won along the way to the World Baseball Classic tournament is earmarked for building more ball fields in Israel.

“I really think there are many ways besides politics that the Jewish community in the United States can support Israel, and show the world that Israel exists outside of the perceived conflict,” Ms. Barta said. “There are things the entire community can agree on.

“Because baseball has such a wide reach it’s an excellent place to start.”

Who: Representatives of the Israel Association of Baseball

What: Will talk about Israeli baseball before the team plays in the upcoming qualifiers

Where: At Congregation Beth Aaron, 950 Queen Anne Road in Teaneck.

Who is invited: Everyone

What else: Two tickets to the September 22 game and Israeli baseball merchandise will be raffled off, and there will be light refreshments.

For more information: Email  about the talk. For information about IAB, go to  (and for most of us, click on the link for English at the top, http://www.baseball.org.il/en/home).