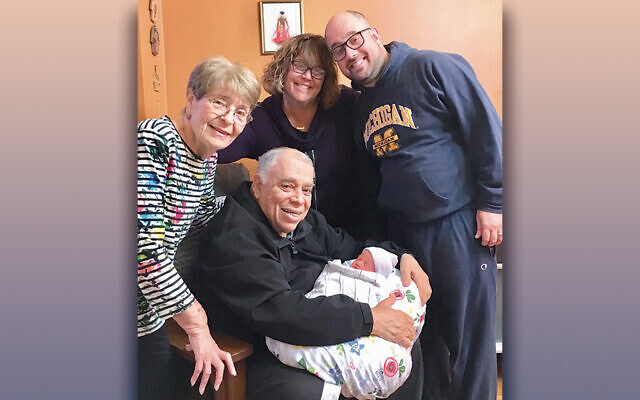 Last Shabbat, Estelle Eisenkraft read haftarah at her infant great granddaughter’s naming. At 80, she stood at the bimah of the Nanuet Hebrew Center, the New City shul to which she and her husband, Allan, have belonged for 50 years, and a bimah from which she and her daughter, the baby’s grandmother, both have been reading Torah and haftarah for decades.

All by itself, that is a moving and unusual accomplishment. Families move. People marry later and have children later. Skills atrophy, and so does the impetus not to allow that to happen. And Ms. Eisenkraft has read haftarah so often that her merely reading it once again, while inspirational, no longer is surprising.

But factor in the question of gender — add that Ms. Eisenkraft and her family have been loyal and active Conservative Jews for even longer than they’ve been New City members, that she not only reads haftarah but also teaches both adults and pre-teens to leyn — and her approach to what she can do has changed along with her movement’s — and you have a historic accomplishment. In fact, Ms. Eisenkraft said, she thinks that it’s a first in Rockland County.

Ms. Eisenkraft’s passion for Judaism goes back to her childhood. She grew up in Jersey City, where she graduated from what was then the Yeshiva of Hudson County — it’s now the Rosenbaum Yeshiva of North Jersey in River Edge — in eighth grade, in 1953. The school, then as now, is Orthodox, so “When the boys learned trope, the girls were somewhere else,” she said. “I was never privy to that part of the education.”

She grew up and got married, nearly 58 years ago. She and Allan moved to Nanuet, where they lived for 41 years; seven years ago they moved to a senior community in West Nyack. They had three daughters; Estelle worked part-time in the family business, right over the river in Yonkers, and they both became intensely involved in Rockland’s Jewish community. Ms. Eisenkraft reels off the long list of organizations she’s led as president, or whose boards she’s been on, and she knows that she’s missing some as she names them. The list includes mid-Rockland Hadassah, the Jewish Federation and Foundation of Rockland, the Holocaust Museum and Center for Tolerance and Education in Suffern, Israel Bonds, Hillel at Rockland Community College, and many, many others. “The JCC Rockland started in my living room,” she said, off-handedly, after trying to remember what else she’s done.

But it wasn’t until her youngest daughter was learning to read haftarah for her bat mitzah that “I told the cantor, Mark Levine, who was teaching my daughter, that I have a burning desire to learn trope that I feel every Shabbat. I love it, and I want to learn it.

“So he gave me lessons, and I learned the first one, for chol hamo’ed Pesach — and I was on my own after that.”

She read the occasional haftarah on Shabbat. Eventually, she started teaching adults; the two women she taught first joined her in becoming “pro-bono tutors,” she said.

When the shul’s rabbi, Simon Potok (yes, the writer Chaim’s brother), who had headed the Nanuet Hebrew Center for about two decades, was diagnosed with cancer in the late 1990s, she “asked him if I could help him in any way,” she said. They were family friends — one of her daughters was his first babysitter — “and I said that I know Hebrew and I can sing, so I can take over your bar and bat mitzvah students.” She did; she taught haftarah to generations of bar and bat mitzvah students after that, and, she said proudly, she’s called “the haftarah lady.”

The family’s connections to the Conservative movement include Camp Ramah. Their three daughters did not go to the most geographically obvious one, the day camp in Nyack; nor did they go to the closest Ramah sleepaway, which is called Ramah Berkshires but actually is in Wingdale, N.Y. They went to Ramah Palmer, in Massachusetts. They didn’t start until the oldest daughter, Sharon, was too old to be a camper — she worked in the kitchen that first summer. But that was just the first summer. All three — Sharon, Meryl, and Debbie — eventually became counselors. 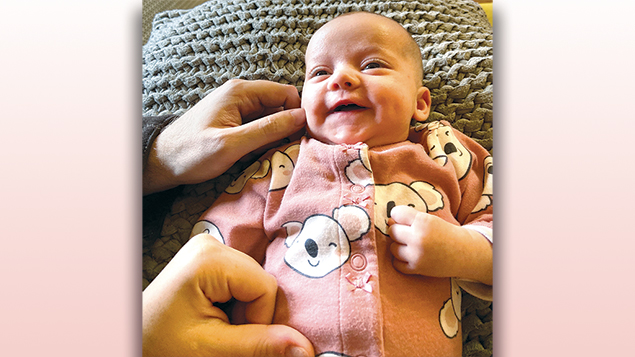 Sharon ended up working at Ramah for 20 summers, her sons also went to Ramah. Sharon Rappaport, to give her a full name, is a teacher; she works in BOCES, used to live in Nanuet, and now lives in Northvale. She’s the new grandmother.

Ms. Rappaport, like her mother, has made her Jewish identity central to her life; she’s most involved in informal education. She’s the youth director at the Orangetown Jewish Center in Orangeburgh, working with both USY and Kadimah. “For the second time, the chapter got an international award from USY,” Sharon’s proud mother said. “She has surpassed me many times over. But I do take a little credit — she did grow up in my house.”

Estelle and Allan have six grandchildren — “five grandsons and finally one princess,” she said.

That brings us to the naming of the first great-granddaughter, the first child of her oldest grandson, Brian, and his wife, Gaia, who live in Weehawken.

The baby’s name, first revealed at that naming, is Nava Claire Rappaport.

What was it like? “It was very exciting,” Ms. Eisenkraft said. “But I think that I maybe was a little numb.

“Every member of the family was part of the service. And that is how it should be.”

“Estelle does the haftarah so very often — we always can rely on her — so that her reading is a regular thing,” he said. “But what happened that Shabbat was special.” Brian was a student of his, and a close friend of his own sons; and he’d performed Nava’s parents’ wedding. “They’re almost like family,” he said.

He has his own favorite image of Estelle and Sharon. Estelle reads the haftarah on Yom Kippur morning; “they gave me that honor 25 years ago,” she said. “And there’s never an empty seat, because right after that is the rabbi’s sermon, and then Yizkor. It’s a huge honor. I was so nervous the first time I did it that I had to go practice all by myself, in that room, when no one was there.” And it’s an honor that connects her, yet again, to the shul; “the first two women I taught — one of them reads the haftarah on the first day of Rosh Hashanah, and the other one reads on the second day.”

Rabbi Kurland picks up the story. Ms. Eisenkraft went up for the maftir aliyah on Yom Kippur, as the person about to read the haftarah always does, and “Sharon read that aliyah.” They were together on the bimah. “Sharon did not tell her mom,” and it was a wonderful surprise.

So when it came to all four generations of the family being on the bimah, all connected to each other and to the community and to the tradition, “it was magical,” Rabbi Kurland said.